The art of printmaking

Largely ignored in the country, printmaking has a rich history and a long tradition of experimentation

Printing was, quite naturally, the predecessor of printmaking, a process in which the artist is involved in creating a matrix from which prints are pulled. The craft offers possibilities that painting does not, which is why it has drawn artists, though the process is usually a painstaking one. It is also laborious and involves the use of a base—whether wood block, linoleum sheet, metal plate or stone—that is treated to create a tactile result that can be used to make a few—never several—editions, each of which is numbered and signed by the artist. Relief printmaking uses wood or linoleum; planographic processes include lithography, chromolithography and oleography created by drawing on limestone or aluminium plates; intaglio processes use platemaking for engravings, drypoints, etchings, aquatints, mezzotints, photoprocesses and collography with or without the use of acids on plates of zinc, copper, aluminium, acrylic or board; and serigraphy has added its mechanical might through an ink-blocking stencil process that uses silk or polyester through which inks are forced to replicate the image. Artists have experimented with these to come up with diverse as well as signature styles that are as distinctive as paintings and sculptures, even though printmaking remains underserved by both viewers and collectors in India. 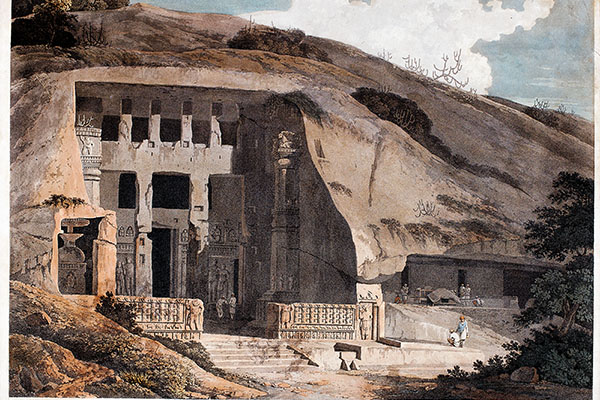 EARLY ADVENTURES
An Excavated Temple on the Island of Salsette
Engraving, c. 1799
Thomas Daniell and William Daniell
Born in Surrey, England, and a student of the Royal Academy of Arts, London, Thomas Daniell was accompanied by his nephew, William Daniell, on their voyage to India in 1784. The two stayed in the country for 10 years, travelling extensively and accepting commissions for mostly landscapes, before returning home. Their original intention had been to return to England with their drawings, which they would turn into lithographic folios for the public curious about the exotic country under
the stewardship of the East India Company.

The result of their labours was issued as ‘Views of Calcutta’, a set of aquatints of that city, and ‘Oriental Scenery’, a set of six volumes of drawings and prints that remains unparalleled in the history of printmaking associated with India. 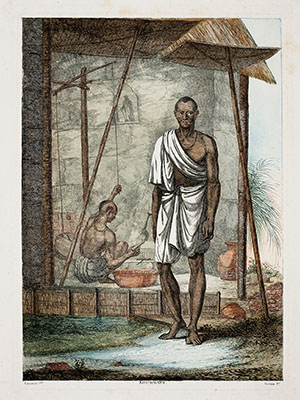 MEN MAKETH THE LAND
Koummars
Coloured Etching, 1799
FB Solvynns
Lithographic prints began to emerge in the mass media as popular prints, and also for illustrating books and journals from the 1870s onwards. The subject of these lithographic prints, which replaced woodcuts, consisted of the popular iconography of gods and goddesses, images that had been visualised by Raja Ravi Varma and his peers. The romantic, realistic rendering of these figures made them instantly popular, and people began to covet them as images for use in their prayer rooms. The cult soon spread to advertisements, used for everything from cooking oils and safety matches to textiles and other household goods. Most prints were made in Germany before Ravi Varma set up his oleography press on the outskirts of Bombay in 1892. 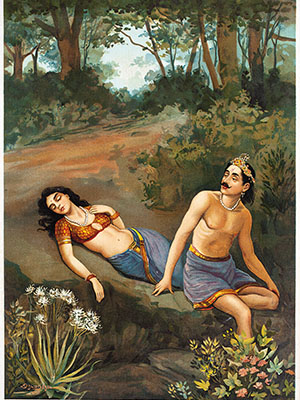 LOVING AND LEAVING
Nala Damayanti Vanvas
Oleograph, 1909
MV Dhurandhar for Ravi Varma Press
India’s most accomplished and well-known academic artist, Kolhapur-born MV Dhurandhar, was trained at Sir JJ School of Art in Mumbai. He maintained a fine balance between academic realism and commercial art. While on one hand he provided the illustrations for Otto Rothfield’s book Women of India, several of his images were especially created with the intent of turning them into oleography prints for the Ravi Varma Press. The press made paper reproductions of artists’ oil paintings, thus communicating the life-like quality of figures, making them popular with an emerging literate middle-class exponents of a Hindu heritage. These cheap oleographs not only ushered in calendar art into India, but continue to be relevant among the masses well over a century later. 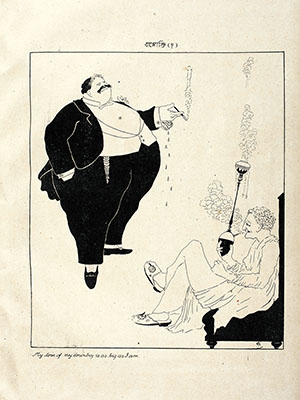 WIT AND HUMOUR
From Realm of the Absurd
Chromolithograph, 1917
Gaganendranath Tagore
A late blooming artist —he started painting at the age of 38—Gaganendranath Tagore was a prominent member of what came to be defined as the Bengal School of Art. But he never wholly prescribed to its precepts, preferring a world language, which he introduced by way of cubism in his watercolour wash paintings. He was a founder member of the Indian Society of Oriental Art in Kolkata in 1907, and his works were exhibited at the Pavilion Marson exhibition in London in 1914, and in Berlin and Hamburg in 1923. In intellectual society, however, he was known as a merciless satirist who lampooned contemporary Bengal society. This witty chromolithograph is from one such book, called Adbhut Lok or Realm of the Absurd. 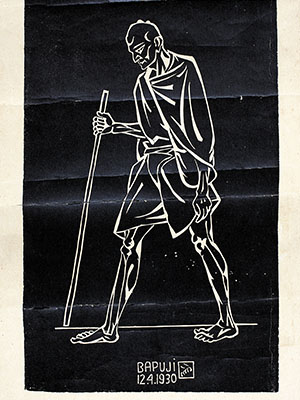 NATIONAL CONSCIOUSNESS
Bapuji
Linocut, 1930
Nandalal Bose
No other artist had as much influence on Indian art as Nandalal Bose, who famously handpainted the first copy of the Constitution of India. One of the exponents of the Bengal School of Art as a student of Abanindranath Tagore, he was in turn a teacher at Santiniketan. A nationalistic consciousness and a commitment towards a classical and folk art formed the underlying themes in his work. A watercolourist for most part, Bose also made prints using etchings, woodcuts and lithographs to explore themes from nature and mythology, revealing the same delicate lines as in his paintings and drawings. This linocut of Mahatma Gandhi is among the most widely circulated images in India. 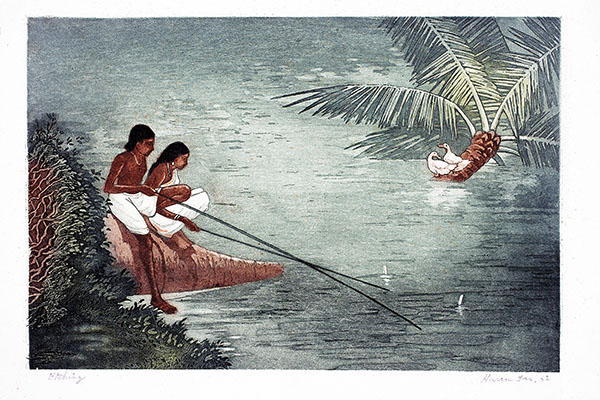 MASTERLY FOCUS
After the Rain
Etching and Aquatint, 1962
Haren Das
Haren Das was a printmaker at a time when oil and watercolour paintings dominated the market, and subjects of violence and terror were the currency of their themes. Haren Das remained oblivious to all this as he created lyrical images of a bucolic Bengali countryside, oblivious to the famines, fear and violence that surrounded him in real life. A student of the then Government College of Art, Calcutta, he remains India’s technically and artistically most proficient artist. Working from densely engraved as well as sparsely cut wood blocks, his simple compositions in a small format consisted mainly of black and white images, sometimes washed with thin layers of colour. He worked in all formats of wood engraving, etching, dry point or linocut, capturing forever the vignettes of a countryside that was fast disappearing with the onslaught of industrialisation and urbanisation. 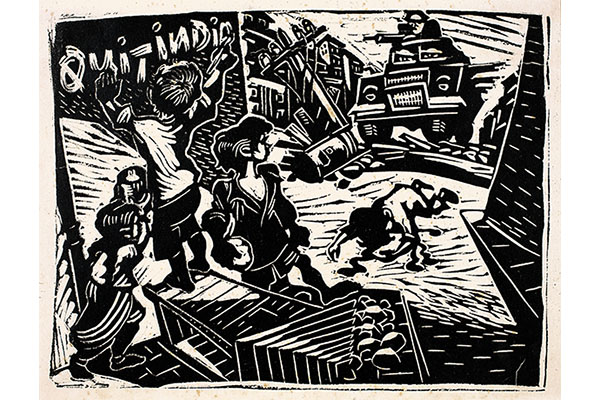 VIEW FROM THE FRINGE
Quake Victim
Lithograph, 1969
Somnath Hore
Responsible for setting up the printmaking department of the Delhi Polytechnic of Art, and for mentoring students at Kala Bhavana, Santiniketan, Somnath Hore’s art practice was formal and Western in its approach. The artist concerned himself with humanist themes, and several of his works straddled the world of painting and printmaking with sculptural, textural prints that resonated with his voice of anguish, raised in an effort to draw attention to the impoverished and destitute. He used minimal, bold strokes to create emaciated bodies and iconic heads that resonated with the pain of the marginalised. His works were foregrounded in the cataclysms of social history and concerned with the working class and the toiling peasant grappling with issues of survival in a world of natural and man-made terrors. 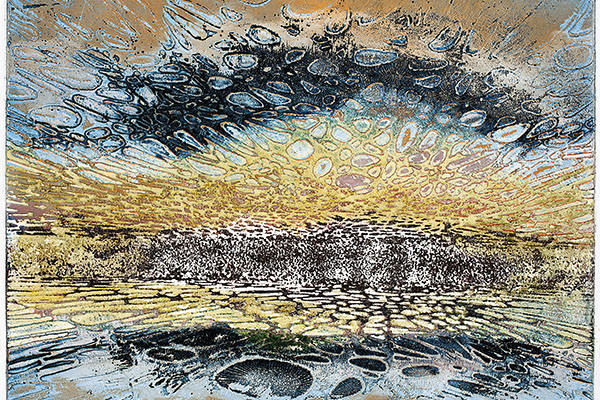 BREAKTHROUGH EXPERIMENTATION
Pastorale
Viscosity, 1959
A Krishna Reddy
Though trained in art in santiniketan, and in sculpture by Henry Moore, it was as a printmaker that Krishna Reddy made his name. He studied, then joined, SW Hayter at his Atelier 17 studio in Paris. Concerned about the expense involved in printmaking—and the poor returns in the medium—Krishna Reddy created a process that reduced the number of plates required by printmakers through a process that came to be known as viscosity. He would etch a plate in acid or prepare with tools several simultaneous layers on just one plate. Intaglio ink would next be applied by hand, following which different colours in different viscosities could be prepared with oil to roll on the plate. The result was an extraordinary range of colours on the image, making his studio in Paris an important port of call for Indian students. 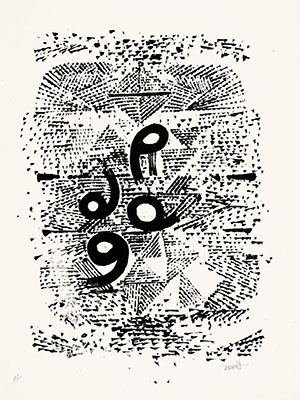 VOTARY OF THE MINIMAL
Untitled
Serigraph, late 20th Century
VS Gaitonde
A reticent human being and a quiet artist, Vasudeo Santu Gaitonde was an early abstractionist who came to be known for his ‘non-objective’ paintings inspired by Zen philosophy. While many of his paintings convey a sense of nothingness, or the infinite, in the early phase of his career he was attracted to the calligraphic form for its strong, linear character and easy flowing movements. And these resulted in attention-grabbing serigraphs. For most part, his works involved a tedious process of painting and stripping off paint to create a sense of depth, something that cannot be captured in prints, leading him to stay away from them in his later life. Gaitonde is famously also known for having painted precious little in his lifetime. 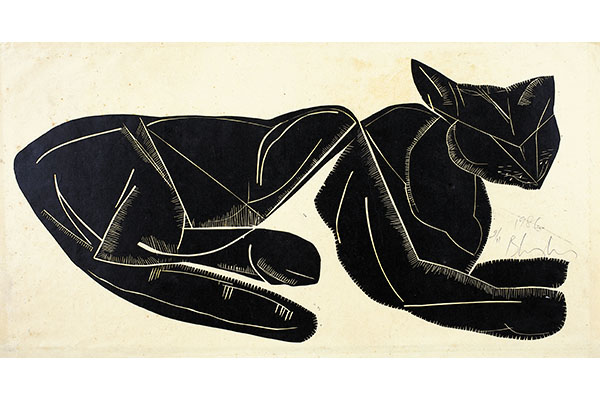 BOLD AND BEAUTIFUL
Untitled (Cat)
Linocut, 1986
RB Bhaskaran
Where there is a cat, it has been said, you’ll find RB Bhaskaran. Levity aside, the artist who studied printmaking in Israel, and trained in frescos in Banasthali, Rajasthan, turned to a visual iconography that lies beyond narrow parochial definitions of history or geography, but is identifiably Indian. His love of cats, and his explorations of human relationships, is recreated in geometric forms that resonate with dots and lines, often against an absence of any discernible background. This foregrounds the image strongly for the viewer, something that requires painstaking labour and long hours spent in layering these prints. An iconoclast, Bhaskaran has been the voice of printmaking, particularly among its votaries in south India. 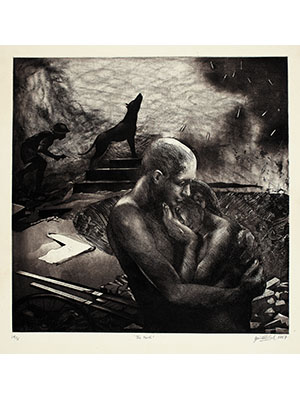 FEMINIST CONCERNS
The Howl
Etching and Aquatint, 1987
Anupam Sud
Printmaker Jagmohan Chopra created group 8, a collective of printmakers, of which Anupam Sud became the youngest member on completion of her graduation from the College of Art, Delhi. But it was at the Slade School of Fine Art, London, that she groomed herself as a printmaker with a radically different approach to the medium. Her preferred manner of printmaking is labour-intensive and focuses on the human body, often in juxtaposition to an architectural element or piece of furniture, which she uses as a pictorial device from which to view her often exposed subjects. Her preoccupation with feminist issues has made her one of the eminent artists of her generation. Through her work, she explores the exploitation and neglect of women.