The Portuguese flavours of Macau

The peninsula may have been handed over to China in 1999, but the former Portuguese colony still hangs around the corner of cobblestone streets 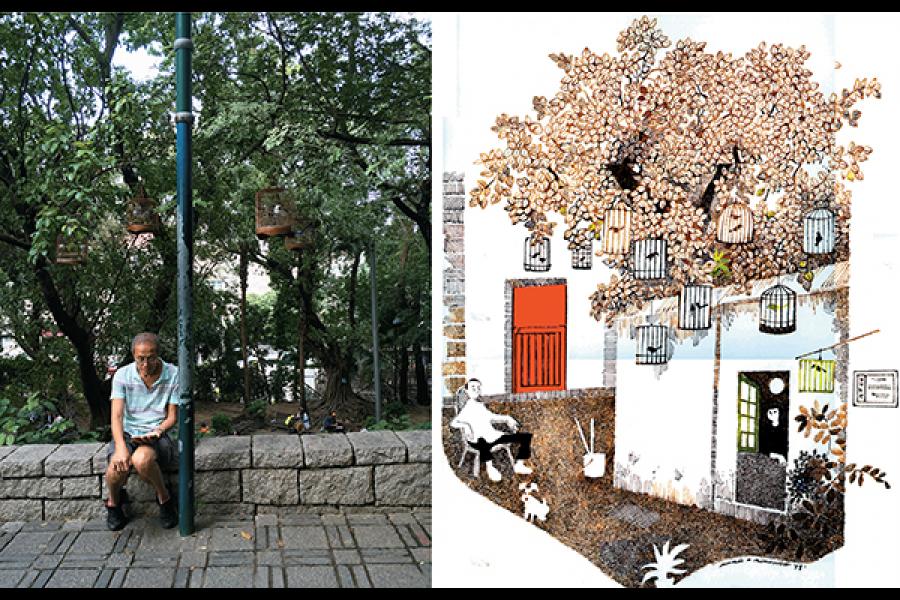 Over the longest table at Antonio’s in Taipa hangs a reproduction of the painting Fado by Portuguese artist José Malhoa. It shows a dishevelled lady rounded by contentment with a shoe dangling off one foot, cigarette in hand, serenaded by a sentimentalist singer, colloquially known as a fado.

When a job interviewer asks me, “Where do you see yourself in five years?”, I’m going to pull out a picture of this painting.

This is Portugal in Macau. Or Macao, as the Portuguese would have it. It’s been 16 years since the former colony was handed to China, but in the cobblestone streets of Taipa, the churches of Barra and piazzas of the Macanese (Macao + Portuguese) quarters of the peninsula, the former colony is still standing its ground against the casinos around it.

It was this Macao that India’s beloved caricaturist and artist Mario Miranda was invited to capture as it made its transition to a Chinese territory. “Mario had an exhibition there in 1999,” says Habiba Miranda, wife of the deceased artist, who accompanied him on the month-long visit.

Mario was born in Portuguese Daman; his family roots are in Goa, where he retired and passed away in 2011 at the age of 85. Like France, Spain and several other countries that he was invited to, Mario’s rendering of Macao captures not only the landmark places that still stand, but also the people that he knew would leave soon. Chinamen in Changsun no longer sell blue pottery on the streets; though the fruit stalls in the streets around Red Market still hold durian fruit, tangerine and fish, they are outnumbered by those selling nail files, nail cutters and the tools of trade of beauty salons.

The Red Market itself is the place to go for fish, but around it are stores that sell gold pendants of sows with suckling piglets, shark’s fins for soups, bird’s nest for vitality and good skin, and dried fish skin. The Street of Happiness, from where “ladies of negotiable affection”—as author Terry Pratchett described them—called out to docked sailors from red shuttered windows, is now just a colourful street that leads to the Sofitel Macau at Ponte 16. Boats from the Mainland still bring in daily supplies. Except these are no longer fish and fruit, but mostly flowers needed to replace the daily bouquets and arrangements at the hotels and casinos, where it’s always spring. In the bay surrounding the highway that connected Taipa and Coloane in those days, clams, mussels and oysters were farmed. Now the sea has been reclaimed to form the Cotai strip where casinos grow poker chips.

In establishments such as Antonio’s in Taipa, Restaurante Litoral and A Lorcha in Macao and Miramar in Coloane, the fado still sings. These places serve Macanese or Portuguese cuisine, with white and red port, and crusty bread to be dipped in hearty Portuguese olive oil. “We found Macao had a strong Portuguese influence that was all its own,” says Habiba, 76. “It wasn’t like Goa; it was very much a unique mix of Macao and Portugal.” 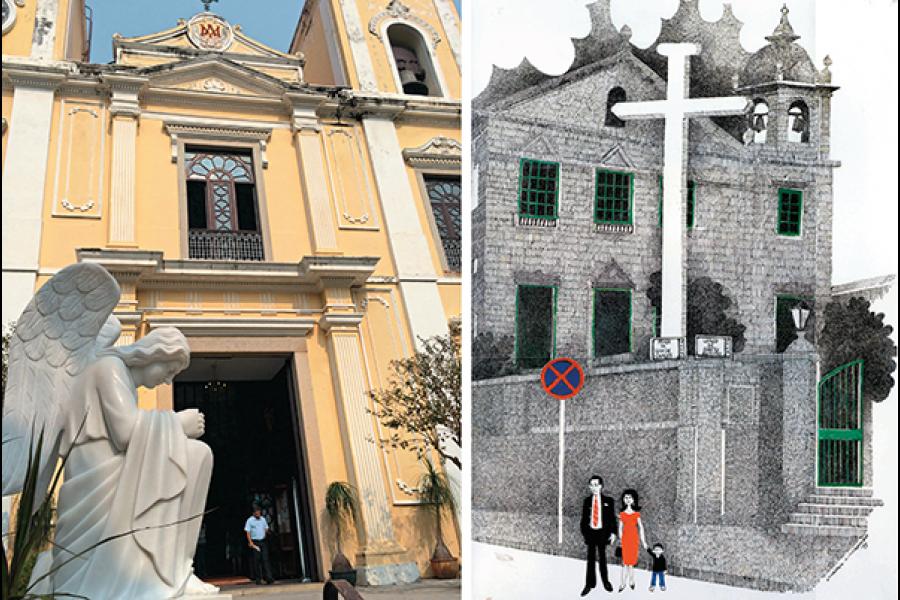 St Lawrence Church (left), one of the three oldest churches in Macao, built by Jesuits in the mid 1600s and Mario Miranda’s rendition of the same

Macanese food is red meat based with the Macao influences of seafood, seasoned with spices that Portugal brought from its other colonies in Africa and Asia. The African chicken, for instance, has the familiar fragrance, but without the tongue-searing spice. There are familiar seafood pot rices which echo paella or moist biryani, but are devoid of the harsh spice. You’ll taste a familiar coconut tang in curries and there’s bibinca for dessert, but not the layered tower that Goa serves. This one is more of a single-layered pudding.

Serradura (sawdust in Portuguese) is the omnipresent dessert—fluffy and palate-cleansing, it is condensed milk and cream whipped together, topped with powdered digestive biscuit. Sounds simple, but its light texture ends the meal on a guilt-less note. If guilt is a stranger to your conscience, try sweet white port wine as a happy ending to your meals.

The Macanese are not shy about hearty eating. “Dinner is at 5.30 0r 6 pm and they believe the bigger mess you’ve made, the more you enjoyed the meal,” says our local host Alorino Noruega. “So you used many plates, left chewed-up bones on the side of the plate and wiped your fingers on the table-cloth. After you are done, the host will just bundle everything in the tablecloth and take it away.”

Most Macanese families are employed in government jobs or run their own hospitality businesses. Very few seek employment in casinos and hotels. The umbilical cord to Europe is still strong with many like Noruega maintaining homes in both places. Many members of the younger generation have married Chinese citizens, so the retirement country for the older generation depends on where the grandchildren are.

Support for the community still comes from the mothership. Marcelino the bard, for instance, came to Macao four years ago to teach the twelve-string rounded Portuguese guitarra. He teaches Portuguese folk songs to children and spends his evenings serenading patrons at Antonio’s.

Much of the Macanese population lives around the Barra neighbourhood. The best way to explore this culture is by embarking on one of the walking trails. There are ones marked to explore heritage, arts and culture and the amalgamation of East and West.

We take the one that explores this East-West confluence and start at the A-Ma temple, believed to be the oldest in Macao. The temple is built to commemorate the incarnation of the goddess Matsu as a poor girl who brought Portuguese sailors safely to this harbour in Macao. The sailors then named this peninsula after her—large rocks with sailing ships painted on them mark the first stones the sailors put their feet on, jubilant at having found coast. Those here to tempt Lady Luck at casinos rub wads of cash on these stones before exchanging them for chips. Across the street is the Maritime Museum with boat and ship models that give an overview of Macao’s fishing past.

From there we walk up the cobblestone streets of Barra Hill to what used to be the centre of residential Macao, Lilau Square. The streets are narrow and a steep uphill climb, but pose no challenge to those zipping about on two-wheelers. Much of the original architecture has been replaced by functional and identity-less modern apartment buildings, but a few gems peek about, like the Moorish Barracks. Built in 1874, it has a mix of Mughal, Portuguese and Moorish architecture. It was built to house an Indian regiment called in to assist local police and now holds the offices of the customs and port police authorities. 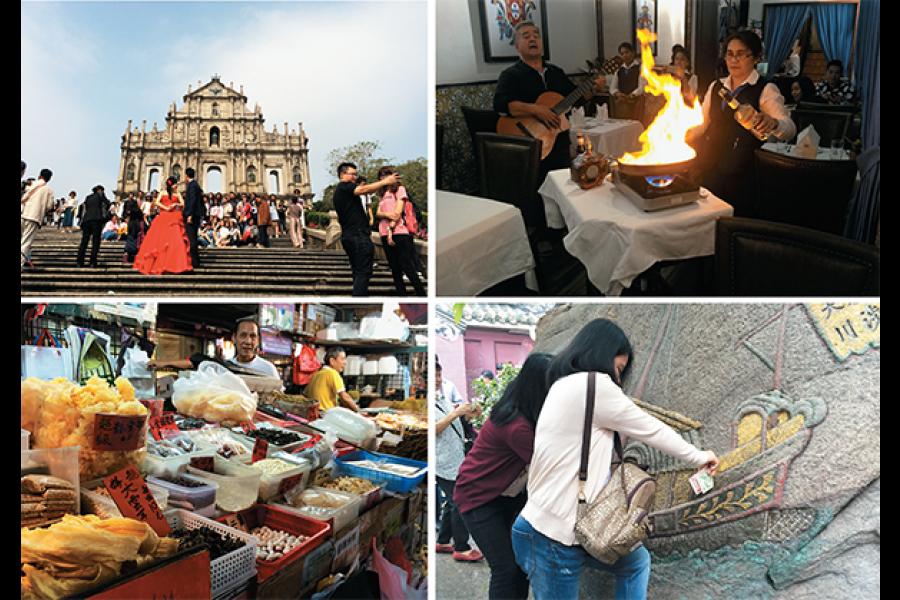 (Clockwise from top left): The Ruins of St Paul’s; Marcelino the bard serenades patrons at Antonio’s; Casino-goers rub wads of cash on the stones at A-Ma temple; the Red Market

Representing the Chinese civilisation on the same street is the Mandarin’s House, home of Chinese economist and author Zheng Guanying. Guanying’s work influenced Chairman Mao’s policies for China. Dating to before 1869, it as an example of a plush Chinese residence with servants’ quarters, courtyards, service entrances and intricate work.

The heart of the Barra region is the piazza at Lilau square with its century-old banyan trees and Lilau fountain. Piazzas functioned as public meeting spaces—a post still stands where public notices would be pinned; and the fountain, once fed by a natural spring, was the stimulus for the residences coming up around it. Piazzas abound in the peninsula, with Senado Square marking the centre of old commercial Macao. Large Christmas and Chinese New Year decorations dress it up in festive times. Taipa Village fought urban developers to keep its own little square which now hosts weekend markets and weekly gossip sessions.

The street meanders through to St Lawrence Church, one of the three oldest churches built by Jesuits in the mid 1600s. As it first stood, it faced the river and families of sailors would pray here for their safe return. The facade and grandeur we see now is more from the mid-1800s when affluent neighbours decided to give it an upgrade.

A casual stroll takes you through St Joseph’s Seminary and Church, St Augustine’s patterned square to Senado Square, which stands in the shadow of Leal Senado (the mayor’s office) and the Central Post Office. In a wood-panelled meeting, the symbolic key to the city was given to the Chinese representative at the change of administration.

Just behind the bustling square is Macao’s most recognisable landmark, the Ruins of St Paul’s, or Mater Dei, and its adjoining Museum of Macau. St Paul’s college was one of the largest Jesuit colleges of the 17th century and one of the largest Catholic churches in Asia. A fire in 1935 took down most of the church, leaving only its facade standing, which is, in this century, the most popular backdrop for selfies.

As a prelude to their wedding, couples conduct elaborate photoshoots in their wedding dresses, traditional garb and also other formal attire. On the 68 steps leading to the facade of St Paul’s stood a couple among a forest of selfie-sticks
and outstretched hands holding their smartphones.

The main avenues leading from here to the hotels are lined with mostly jewellery and watch shops instead of the pawn shops which were once a pillar of the local economy. So much so that Tak Seng On (The Virtue and Success Pawnshop) has been preserved as a museum on Avenida de Almeida Ribeiro.

This is the new facade of Macao — five- and seven-star hotels with more Tiffany and Prada stores inside them than 7/11s outside. But deep in its heart, a fado sings something melancholic.

Tweets by @forbes_india
30 Under 30: The class of 2015 - A report card
Podcast: Will Jaitley deliver for Modi?