Treasures of the maharajas: The Al-Thani Indian jewellery collection

For hundreds of years, the emperors of India have commissioned extraordinary royal jewellery. And no one has amassed a more dazzling collection than Sheikh Hamad bin Abdullah Al-Thani, whose pieces span the 17th-century Mughal empire to 21st-century Cartier. This January, the Al-Thani collection goes on view at New York's Metropolitan Museum, and in an exclusive interview, the Qatari prince explains his passion for precious gems 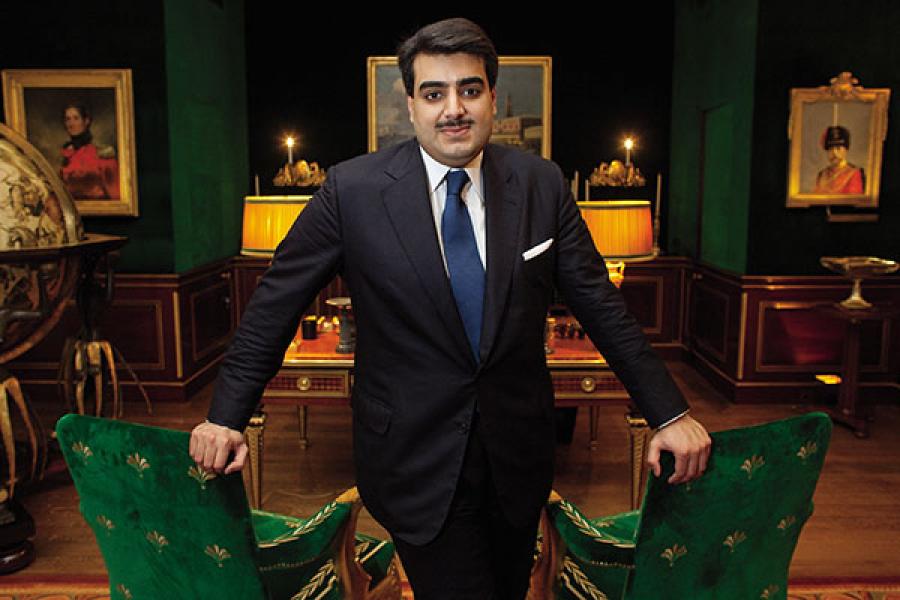 His Highness Sheikh Hamad bin Abdullah Al-Thani, CEO of the Qatari megaholding company Qipco and first cousin of the Emir, is a man accustomed to getting what he wants. But not all desires can be foreseen. There was, for example, the day in October 2009 when he visited an exhibition called ‘Maharaja: The Splendour of India’s Royal Courts’, at London’s Victoria and Albert (V&A) Museum. Sheikh Hamad walked away enthralled by the artistry and otherworldly opulence of the old Indian courts. The sheikh, who at that time had never even been to India, would soon begin scouring the world for royal Indian “splendours” of his own, maharajas’ treasures bejewelled with rubies, emeralds, diamonds, gold, jade and pearls.

“It is remarkable what you can do when you are a collector with his energy, passion, knowledge level and resources,” observes Amin Jaffer, the V&A curator who invited Sheik Hamad, then 27 years old, to the Maharaja exhibit and later, as international director of Asian art at Christie’s, would advise him on his acquisitions.

And acquire he did. Five years after he exited the Victoria and Albert show, a new landmark exhibition of Indian riches—‘Treasures from India’, at the Metropolitan Museum of Art—is all from the Al-Thani collection. Spanning 400 years of Indian high jewellery, from Mughal heritage masterpieces to Art Deco works by Cartier to maharaja-inspired creations from contemporary designers, there is no comparable collection on the planet. 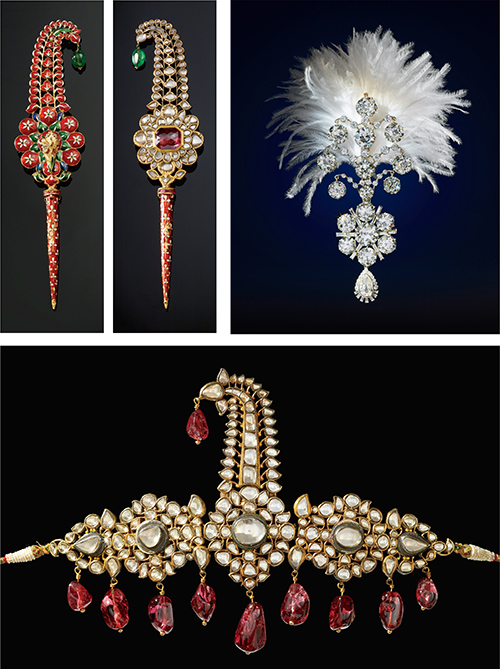 And Sheikh Hamad’s passion for collecting remains strong. He remembers well the vision from the Victoria and Albert show that started it all. “Without doubt,” he says, “the piece which most impressed me was the Mughal sapphire turban ornament given to Admiral Charles Watson by Nawab Mir Jafar in 1757.” In the Watson sarpech, part of the V&A’s permanent collection, you can find the seeds of at least three blossoming ideals that would drive the Sheikh’s ensuing hunt: It is extremely precious, set with gold, rubies, emeralds, diamonds and a centerpiece sapphire; it is gorgeously worked; and it has that most elusive attribute of all: A clear, verifiable historical provenance. The Mughal period that created that Watson ornament anchors one historical end of the Al-Thani collection, for a very good reason: The Mughals created one of history’s most unbridled legacies of luxury craft. The acquisitive empire, which claimed descent from Genghis Khan himself, swept into the Indian subcontinent in the 16th century and lingered as dynastic rulers right through to 1857. They were rapturous, not to say rapacious, lovers of treasure who soon learnt that the Indian artisans in their new dominions were bringing game to the jewelled arts on a level they had never imagined.

“The discovery by the Mughals of this kind of absolute commitment to the jewelled arts in the Indian subcontinent led to a kind of magic,” says Navina Haidar, the Met curator responsible for the ‘Treasures from India’ exhibit, which runs through January 25, 2015. “They were people who were born to love jewellery and had great knowledge, and then discovered something that surpassed their own experience.”

As patrons, plunderers, hoarders and connoisseurs in a land of rich mines and world-spanning commerce, the Mughal rulers assembled coffers that became the envy of the sticky-fingered world. To this day the best pieces have a dislocating, Aladdin’s Cave-fantasy impact.

There is, for example, the masterpiece of the Al-Thani collection—a slender dagger, whose hilt is carved from a single piece of jade and topped with a carved European head. Simply knowing that the hilt was crafted for the Mughal emperor Jahangir (he was painted wearing the dagger circa 1630) and the blade for his son, Shah Jahan, the builder of the Taj Mahal, would make it prize enough. (Samuel FB Morse is also thought to have been an owner.) But the refinement of the object itself, the minutely rendered head, presumably of a European boy with Renaissance-style curls—or possibly modelled from a Goan depiction of Christ—lifts it from the plane of history into the realm of art. 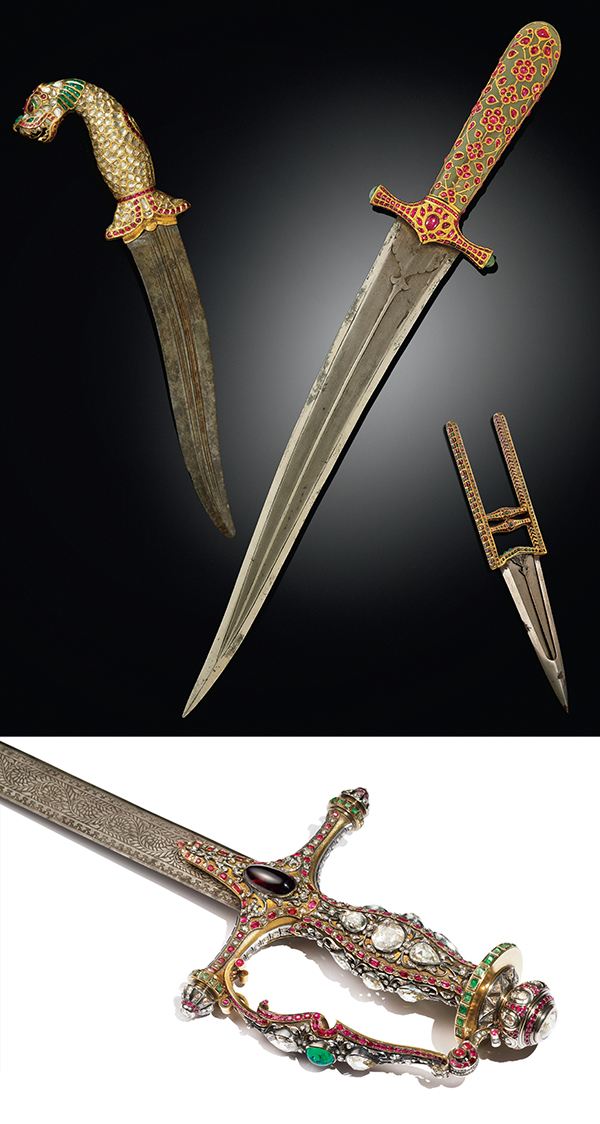 The dagger had surfaced on the UK market in the 1970s and reappeared at a Victoria and Albert exhibition in the 1980s before vanishing again. “I heard from a museum curator that a private collector just might be persuaded to sell it to an important collection,” Jaffer recalls. “We had to pursue an introduction. I spoke to several dealers and finally found one who knew the owner and agreed to act as intermediary. It still took a very, very long time. It’s a major thing to own, after all, and there’s a lot of emotion involved in selling it. And we had to somehow arrive at a value—this is a piece with no parallel. In the end, I think it took about a year from start to finish.”

Other acquisitions were more deus ex machina. “My biggest surprise came from a text message I received at the Pierre hotel in September 2012,” says Jaffer. “A friend told me that Cartier had the famous tiered-ruby choker that Jacques Cartier made [in 1931] for the Maharaja of Patiala. It is a piece I knew extremely well through photographs and research, but I never expected to handle it, because we thought it had been lost over the years.

“Very quickly, I contacted Cartier, who sent me images and confirmed the piece as the very same one. We immediately put it on hold, and Sheikh Hamad flew from Hong Kong to see it at Cartier in Paris. He acquired it a week later. It was a great moment for the collection, but rather unexpected.” 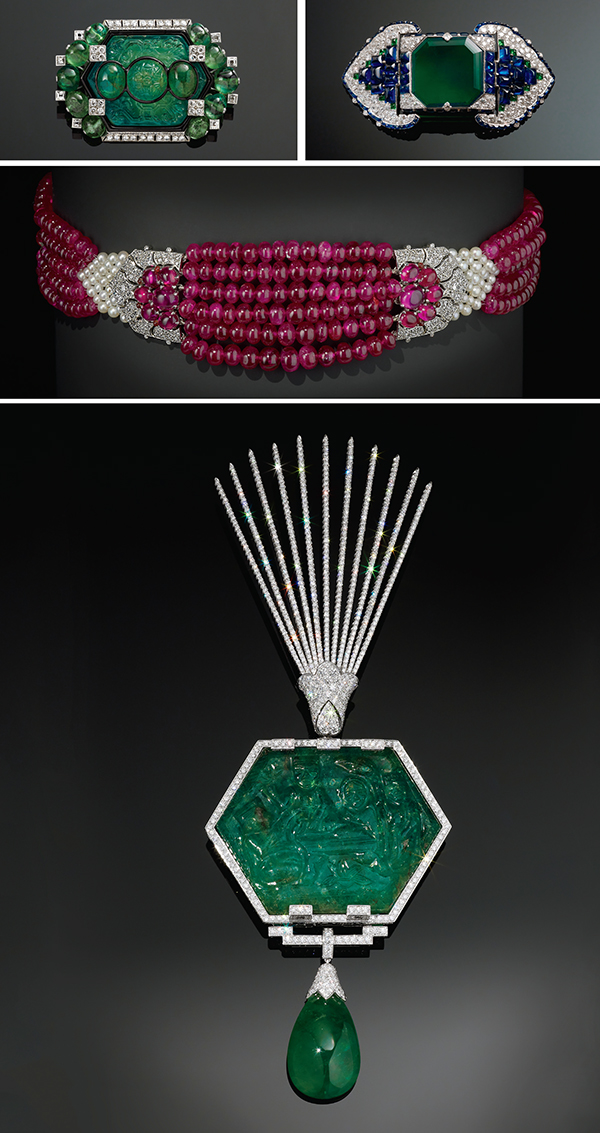 Vintage Cartier: An emerald-and-diamond brooch made by Cartier in 1925 (above, left); A sapphire, diamond and emerald Cartier belt brooch, circa 1920-1930 (above, right); the ruby choker that the Maharaja of Patiala commissioned Cartier to design in 1931; 21st-century treasure: A platinum and diamond aigrette designed by Cartier in 2012 uses a historical emerald carved in India and depicts a scene from the Hindu epic Ramayana

Sheikh Hamad encountered some surprises of his own. “The greatest discovery within the collection,” he says, “is the Mughal round gem-set locket pendant. I acquired the piece both for its beauty and the skilled technique required in its creation.” Only later did he discover its hidden history: “The interior bears an inscription with its weight, a confirmation that the pendant belonged to the imperial treasury.”

There is a wealth of other surprises and astonishments among the 63 objects from the Al-Thani pieces being shown at the Metropolitan. And if it seems extraordinary that such a young collection would be honoured with an exhibit on this scale, Met curator Haider has a modest answer: “It is among the top few private collections in the world.”

Adds Jaffer: “It spans 400 years of jewellery, and in each of these periods there are real masterpieces. It’s a collection with strengths all the way through. There are other great Indian jewellery collections that focus on a particular dynasty or a period or a region. This collection looks at the evolution of Indian jewellery from the 17th century to the present day. From that perspective, it has no equal.”