Far from an instrument of Haiti's salvation, its central bank was, from its very inception, an instrument of French financiers and a way to keep a suffocating grip on a former colony into the next century 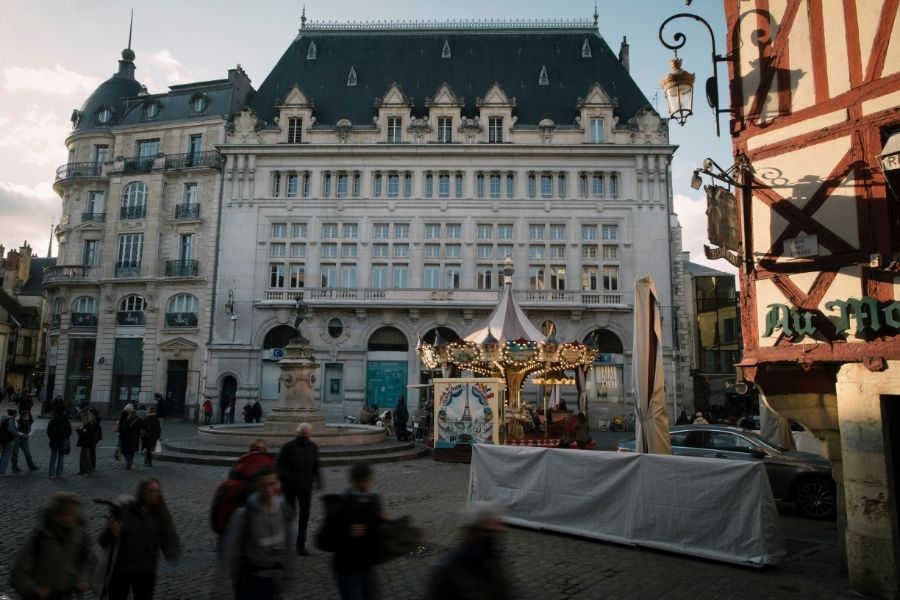 A branch of Crédit Industriel et Commercial in Dijon, France, Feb. 11, 2022. At a time when CIC was helping finance the Eiffel Tower as a monument to French liberty, it was choking Haiti’s economy, taking much of the young nation’s income back to Paris. Today it is a $355 billion subsidiary of one of Europe’s largest financial conglomerates. Image: Dmitry Kostyukov/The New York Times

‘We Owe More Than Before’

Durrieu knew how to sell a dream.
Five years earlier, CIC and a now-defunct partner had issued Haiti a loan of 36 million francs, or about $174 million today. The money was supposed to build bridges, marketplaces, railroads and lighthouses.
It was a time of worldwide investment. England built new schools and passed laws on mandatory education. Paris opened a 97-mile aqueduct carrying clean drinking water to the capital. In New York, the iconic arches of Brooklyn Bridge rose above the East River, an engineering marvel that would forever transform the city’s economy.
Beyond bricks and steel, Haiti earmarked about 20% of the French loan to pay off the last of the debt linked to France’s original ransom, according to the loan contract. “The country will finally come out of its malaise,” the Haitian government’s annual report predicted that year. “Our finances will prosper.”
None of that happened. Right off the top, French bankers took 40% of the loan in commissions and fees. The rest paid off old debts or disappeared into the pockets of corrupt Haitian politicians.
“None of the goals has been achieved,” a Haitian senator declared in 1877. “We owe more than before.”
The 1875 loan from CIC and its partner left two major legacies. The first is what economist Thomas Piketty called the transition from “brutal colonialism” to “neocolonialism through debt.”
Haiti took on millions in new interest, hoping to finally shed the burden of paying its former slave masters. In that way, the loan helped prolong the misery of Haiti’s financial indentureship to France. Long after the former slaveholding families considered the debt settled, Haiti would still be paying — only now to CIC.
Haitian leaders, of course, share the responsibility, and some scholars have argued that this loan shows that politicians cared more about lining their pockets than developing a nation.
The second legacy was felt more immediately. The loan initially obligated the Haitian government to pay CIC and its partner nearly half of all the taxes the government collected on exports such as coffee until the debt was settled, effectively choking off the nation’s primary source of income.
That was the first step, giving Durrieu and his French bank a claim to much of Haiti’s financial future. He soon set his sights on even more.

Haiti had tried to start a national bank for years. Salomon’s predecessor had even bought bank vaults. But in 1880, Haiti’s longing for financial independence aligned neatly with Durrieu’s plans.
The contract establishing Haiti’s national bank reads like a series of giveaways. Durrieu and his colleagues took over the country’s treasury operations — things like printing money, receiving taxes and paying government salaries. Every time the Haitian government so much as deposited money or paid a bill, the national bank took a commission.
Lest there be any doubt where that money was headed, the contract said the National Bank of Haiti would be chartered in France and exempted from Haitian taxes and laws. All power was put in the hands of the board of directors in Paris. Haiti had no say in the operation of its own national bank.
The national bank’s headquarters — which also happened to be CIC’s headquarters — sat in the 9th Arrondissement of Paris, in the shadow of the lavish Palais Garnier opera house.
Durrieu was the first chair of a board that included French bankers and businessmen, including Édouard Delessert, a great-grandson of one of the biggest slaveholders in Haiti’s colonial history, Jean-Joseph de Laborde.
Handwritten notes from the national bank show, from the beginning, who was in charge. As the Paris Financial Association wrote in 1896, “The National Bank of Haiti is a French financial institution whose headquarters, which is open to bondholders, is in Paris. Its offices in Haiti are only branches, placed under the authority and control of the head office.”
Durrieu’s gamble paid off. At a time when typical French investment returns hovered around 5%, board members and shareholders in the National Bank of Haiti earned an average of about 15% a year, according to a Times analysis of the bank’s financial statements. Some years, those returns approached 24%.
Durrieu made out handsomely. His contract with Haiti granted him thousands of special shares in the national bank, worth millions in today’s dollars.The year he christened Haiti’s national bank, he was named a commander of the Légion d’Honneur, an order of merit awarded for service to France.

Soon after the fireworks display at the national palace, Haitians began realizing they had received a raw deal.
The national bank offered no savings accounts to Haitian people or businesses. And although the contract allowed it to loan money to businesses — and Haitians clearly hoped it would — bank ledgers from an archive in Roubaix, France, showed that seldom, if ever, happened.
“It is not from the Bank of Haiti, as it functions, that Haitians can expect their recovery,” Haiti’s finance secretary, Frédéric Marcelin, wrote at the time.
The second half of the 19th century should have offered Haiti an enormous opportunity. Global demand for coffee was high, and Haiti’s economy was built around it.
Across the Caribbean Sea, Costa Ricans were putting their coffee wealth to work building schools, sewage systems and the first municipal electrified lighting system in Latin America. Haiti, by contrast, obligated much of its coffee taxes to paying France — first to its former slaveholders, then to CIC.
Despite all that, Haiti was a middle-of-the-road Caribbean economy, thanks to high coffee prices. But when the market tanked in the 1890s, Haiti’s coffee taxes exceeded the price of the coffee itself. The entire economic model was on the brink of collapse.
It was time for yet another loan: 50 million francs (about $310 million today) from the National Bank of Haiti in 1896. It was, once again, guaranteed by coffee taxes, the country’s most reliable source of money.
Haitians had been poor for generations. But this moment — when the country was tethered to coffee, CIC and the national bank — is when Haiti began its steep decline relative to the rest of the region, according to data compiled by Victor Bulmer-Thomas, a British economist who studies Caribbean history.
“Haiti made plenty of its own mistakes,” he said, like taking on new debt and failing to diversify its economy. “But there’s no doubt a lot of its problems from the late 19th century onward can be attributed to these imperial powers.”

The Fall of the National Bank

Durrieu died in 1890, before the unraveling of the national bank he created.
Haitian authorities began accusing the bank in 1903 of fraudulent overbilling, double-charging loan interest and working against the best interest of the country. But the bank reminded them of an important detail: Chartered in France, it considered such disputes beyond the reach of Haitian courts.
Undeterred, Marcelin persuaded parliament to retake control of the government treasury. Haiti would print its own money and pay its own bills.
But records in the French Diplomatic Archives show that the national bank still had a powerful ally in its corner: the French government.
In January 1908, France’s envoy to Haiti, Pierre Carteron, met with Marcelin and urged him to restore normal relations with the bank. Marcelin refused. The National Bank of Haiti, should it survive at all, would actually need to work toward the economic development of Haiti, he said.
That might be possible, Carteron replied. Of course, he added, Haiti would first have to return its treasury to French control. And besides, “You need money,” Carteron said, according to his own notes. “Where are you going to find it?”
As his handwritten messages show, Carteron suspected Marcelin would never agree to that. So he encouraged his colleagues in Paris to come up with a new plan.
“It is of the highest importance that we study how to set up a new French credit establishment in Port-au-Prince,” Carteron wrote, adding, “Without any close link to the Haitian government.”
That new institution opened in 1910 with a slight tweak to the name: the National Bank of the Republic of Haiti. France still had a stake, but after 30 years, CIC was out.
By then, there was a new center of gravity in the financial world: Wall Street, and a swaggering group of bankers from the National City Bank of New York, which ultimately became Citigroup.
The U.S. financiers continued operating from Durrieu’s playbook and became the dominant power, leading to a consequence even more lasting than the debt he helped orchestrate.
After all, Wall Street wielded a weapon more powerful than a French diplomat making oblique threats. American bankers called on their friends in Washington, and 35 years after Durrieu’s bank came into existence, the U.S. military invaded Haiti.
It was one of the longest military occupations in American history, enabling the United States to seize control over Haiti’s finances and shape its future for decades to come.
Once again, the country had been undermined by the institution Salomon had so proudly feted that night at the palace: Haiti’s national bank.