The announcement followed closely on the heels of cuts in April, when Robinhood laid off 340 workers, or about 9% of its employees at the time. CEO Vlad Tenev cited further worsening of the economy, including inflation and the crash of the crypto market, which has "reduced customer trading activity and assets under custody"

By Lora Kelley and David Yaffe-Bellany 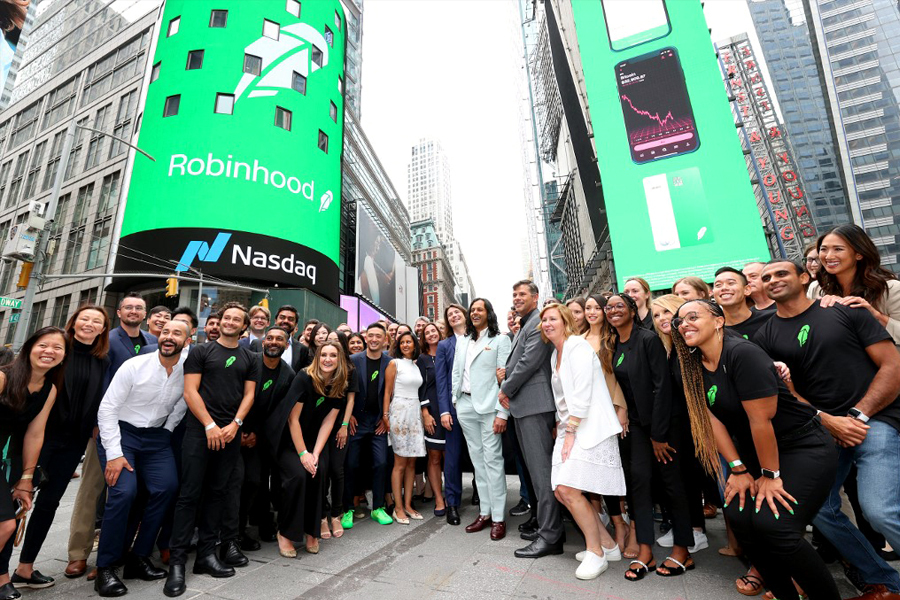 Robinhood, the trading app that popularized one-click trading and helped fuel last year’s meme stock frenzy, said Tuesday that it was laying off about 23% of its workforce.Vlad Tenev, the chief executive of Robinhood, said in a blog post that the layoffs would affect employees across the company, especially those in operations, marketing and program management roles.Robinhood declined to comment on the layoffs.
The announcement followed closely on the heels of cuts in April, when Robinhood laid off 340 workers, or about 9% of its employees at the time. Since then, Tenev wrote, further worsening of the economy, including inflation and the crash of the crypto market, has “reduced customer trading activity and assets under custody.” The price of bitcoin has fallen by more than half this year, to about $23,000 per coin. The cryptocurrency rose as high as $66,000 in late 2021.

The layoffs come as part of a wave of job cuts at tech companies, including some cryptocurrency firms. In June, cryptocurrency exchanges including Coinbase and Gemini announced that they were laying off employees. Last week, Shopify, an online marketplace, announced it was cutting 10% of its 10,000 employees.
In his memo Tuesday, Tenev said Robinhood misjudged the economy and trading activity. “As CEO, I approved and took responsibility for our ambitious staffing trajectory — this is on me,” he wrote.
The company also released its second-quarter results Tuesday, reporting that its monthly count of active users declined to 14 million in June, a decrease of 1.9 million.
The turbulence represents a major comedown for Robinhood, which became a key player in the meme stock craze in early 2021, when investors banded together to drive up the stocks of companies including video game retailer GameStop and movie theater chain AMC. On Jan. 27, 2021, GameStop shares closed up nearly 1,800% from a few weeks before, a record. Then, Robinhood restricted trading in some meme stocks. The restrictions led the stocks to plunge. Lawsuits, a Securities and Exchange Commission investigation and congressional hearings soon followed.
Robinhood’s stock price soared during the meme-stock trading. On Aug. 7, 2021, the company was worth $46 billion, up about 60% from its valuation a week before. But its stock has plunged 50% since the beginning of the year as it continues to deal with the fallout.
The layoffs come at a challenging moment for financial technology companies.
Coinbase, the publicly traded cryptocurrency exchange, laid off 18% of its staff in June amid the crypto market crash. Other major crypto companies, like OpenSea, Gemini and Crypto.com, have also made job cuts.
“Everyone over-hired — Coinbase over-hired, Robinhood over-hired. When money was easy, they were just hiring, hiring, hiring,” said Dan Dolev, a senior analyst at Mizuho. “I’m not surprised to see these cuts.”
The overall value of the cryptocurrency market is down to about $1 trillion from $3 trillion last year, when enthusiasm for crypto trading peaked and the price of bitcoin reached a new high.
Robinhood has been working to build out its crypto arm this year, listing new coins and rolling out a crypto wallet product. “The one thing that I liked the least about Robinhood is their crypto exposure,” Dolev said. “Anything that has no intrinsic value is always prone to problems.”
Also on Tuesday, the New York State Department of Financial Services announced it was fining Robinhood’s crypto operation $30 million over violations of its anti-money-laundering and cybersecurity regulations.
“As its business grew, Robinhood Crypto failed to invest the proper resources and attention to develop and maintain a culture of compliance,” Adrienne A. Harris, the superintendent of financial services, said in a statement.
Cheryl Crumpton, associate general counsel at Robinhood, said in a statement that the company was “pleased” the settlement had been finalized. “We have made significant progress building industry-leading legal, compliance, and cybersecurity programs, and will continue to prioritize this work to best serve our customers,” she said.

Tweets by @forbesindia
Huobi gets green light as exchange provider in Australia
Morbi's Varmora Granito was in a cluttered market. Its next-gen maverick Bhavesh Varmora changed the game