Lithium production and prices have skyrocketed amid an EV boom, as have the expectations of poverty-stricken communities near lithium plants. But there are growing concerns about the impact on groundwater sources in regions already prone to extended droughts, with recent evidence of tree and flamingo die-offs 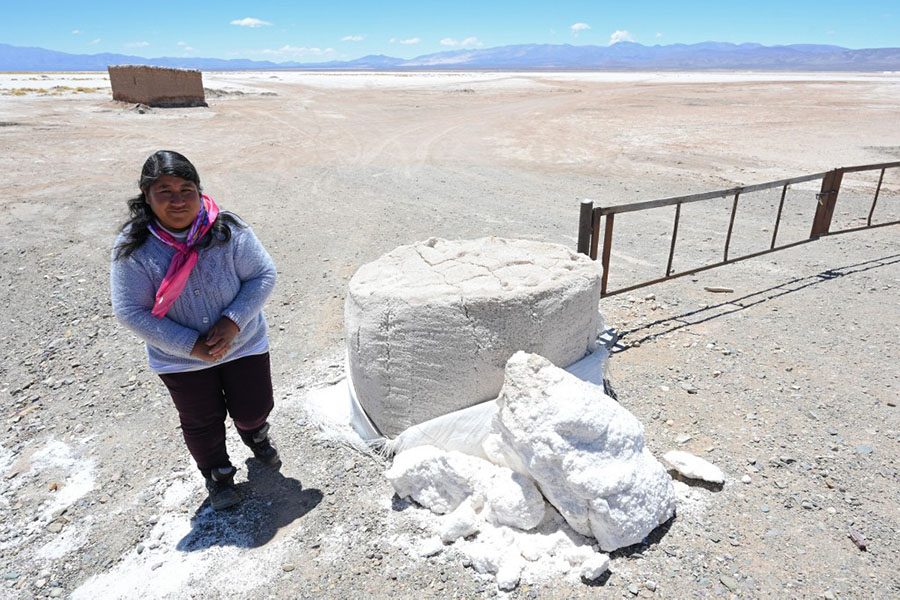 San Pedro de Atacama, Chile: The turquoise glimmer of open-air pools contrasts sharply with the dazzling white of salt flats in Latin America's "lithium triangle," where hope resides for a better life fueled by a metal bonanza.
A key component of batteries used in electric cars, demand has exploded for lithium—the "white gold" found in Chile, Argentina and Bolivia in quantities larger than anywhere else in the world.
And as the world seeks to move away from fossil fuels, lithium production—and prices—have skyrocketed, as have the expectations of communities near lithium plants, many of whom live in poverty.
But there are growing concerns about the impact on groundwater sources in regions already prone to extended droughts, with recent evidence of tree and flamingo die-offs.
And there are scant signs to date of benefits trickling down.

"We don't eat lithium, nor batteries. We do drink water," said Veronica Chavez, 48, president of the Santuario de Tres Pozos Indigenous community near the town of Salinas Grandes in Argentina's lithium heartland.
A poster that meets visitors to Salinas Grandes reads: "No to lithium, yes to water and life."
Lithium extraction requires millions of liters of water per plant per day.
Unlike in Australia—the world's top lithium producer that extracts the metal from rock—in South America it is derived from salars, or salt flats, where saltwater containing the metal is brought from underground briny lakes to the surface to evaporate.

About 56 percent of the world's 89 million tons of identified lithium resources are found in the South American triangle, according to the US Geological Survey (USGS).
The world average price rose from $5,700 per ton in November 2020 to $60,500 in September this year.
Chile hosts the westernmost corner of the lithium triangle in its Atacama desert, which contributed 26 percent of global production in 2021, according to the USGS.
The country started lithium extraction in 1984 and has been a leader in the field partly because of low rainfall levels and high solar radiation that speeds up the evaporation process.
But Chilean law has made it difficult for companies to gain concessions from the government since the dictatorship of Augusto Pinochet declared the metal a "strategic resource" for its potential use in nuclear bombs.
Only two companies have permits to exploit the metal—Chile's SQM and American Albemarle, which pay up to 40 percent of their sales in tax.
Also read: The lithium gold rush: Inside the race to power electric vehicles
In the first quarter of this year, lithium's contribution to the public coffers surpassed those of Chile's mainstay metal, copper, for the first time, according to government records.
Yet, the environmental costs are starting to stack up, and locals fear there is worse to come.
This year, a study in the journal Proceedings of the Royal Society B found a link between lithium mining and a decline in two flamingo species in the Salar de Atacama.
"The development of technologies to slow climate change has been identified as a global imperative. Nonetheless, such 'green' technologies can potentially have negative impacts on biodiversity," said the study.
In 2013, an inspection at the SQM site—which reported using nearly 400,000 liters of water per hour in 2022—found that a third of carob trees in the area had died.
A later study pointed to water scarcity as a possible cause.
"We want to know, for sure, what has been the real impact of the extraction of groundwater," said Claudia Perez, 49, a resident of the nearby San Pedro river valley.
She was not against lithium, said Perez, provided there are measures to "minimize the negative impact on people."

Across the Andes in Argentina, the salt lakes of Jujuy host the world's second-largest lithium resources along with the neighboring provinces of Salta and Catamarca.
With few restrictions on extraction and a low tax of only 3.0 percent, Argentina has become the world's fourth-biggest lithium producer from two mines.
With dozens of new projects in the works with the involvement of US, Chinese, French, South Korean and local companies, Argentina has said it hopes to exceed Chilean production by 2030.
Also read: 5 myths about lithium-ion you should know
But not everyone is sold on the idea.
"It is not, as they say, that they (lithium companies) are going to save the planet... Rather it is us who have to give our lives to save the planet," said Chavez, of Santuario de Tres Pozos in Jujuy province.
A neighbor, 47-year-old street food seller Barbara Quipildor added fiercely: "I want them to leave us alone, in peace. I don't want lithium... My concern is the future of my children's children."

About 300 kilometers (190 miles) north of Jujuy, the salar of Uyuni in Bolivia holds more lithium than anywhere else—a quarter of global resources, according to the USGS.
Half of the residents in the region—which is also rich in silver and tin—live in poverty, household surveys show.
The country's former leftist president Evo Morales nationalized hydrocarbons and other resources such as lithium towards the start of his 2006-2019 mandate and vowed Bolivia would set the metal's global price.
In Rio Grande, a small town near the Yacimientos de Litio Bolivianos (YLB) lithium plant, Morales' plans were met with excitement.
In 2014 Donny Ali, a lawyer now aged 34, opened a hotel with the expectation of an economic boom.
He called it Lithium.
Also read: How India can lead in a vital platform technology: Lithium-ion batteries
"We were expecting major industrial technological development and more than anything, better living conditions," he told AFP.
"It didn't happen."
Hoping to boost the struggling lithium sector, the government opened it up to private hands in 2018, though domestic legislation has not yet denationalized the resource, and no private extraction has yet begun.
"Some think that Bolivia will 'miss the boat' of lithium," said economist Juan Carlos Zuleta. "I don’t think that’s going to happen."
The real question, he said, is: when the boat comes, "will lithium extraction benefit Bolivians?"
The three countries are now looking towards battery manufacturing—possibly even building electric cars—as a way to turn the natural lithium bounty into a modern-day industrial revolution.
"There is a concrete possibility for Latin America to become the next China," said Zuleta.
In the meantime, the Hotel Lithium stands empty.
By Martín SILVA
© Agence France-Presse

Tweets by @forbesindia
Crisis leadership in the fourth industrial revolution: What's changed and how your organization can come out stronger
How particle physics is pushing cancer treatment boundaries