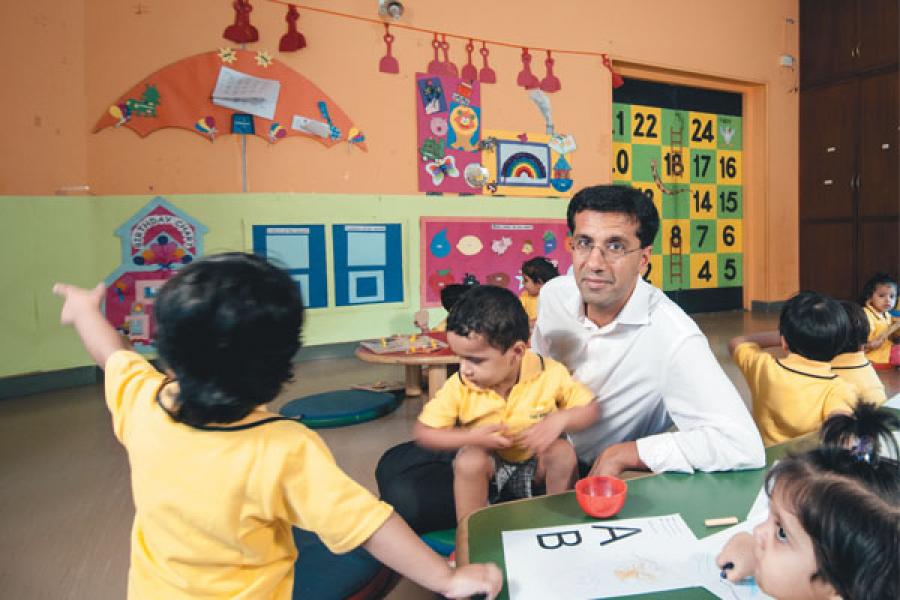 Image: Amit Verma
Ashish Dhawan, who set up the Central Square Foundation, wants to pump in money to set up an outcome-oriented education structure

Ashish Dhawan
Award: Nextgen leader in philanthropy
Age: 43
Why He Won: For quitting a lucrative career in private equity to make India’s primary and secondary schooling system more equitable.
His Trigger: Believes that India’s growth engine will come to a grinding halt in 2025 if we don’t provide our children with a good education.
His Mission: Wants to focus on systemic change as policy reform is the single-biggest lever for change.
His Action Plan: Focus includes affordable schools, teacher and school leader training, education technology and accountability/community engagement.
His Next Move: Wants to do multiple experiments with education technology for schools. Is keen to prove that India needs a charter law to utilise the infrastructure of government schools in metros to build innovation schools that will act as beacons for the public system.

The world is divided into haves and have-nots, capitalists and Communists, city slickers and rural folks. The common thing that binds all these divisions is money. How about the division that’s based on the well-schooled and the drop-outs? The more educated have a significant earnings advantage over the less educated. This is the sort of advantage that someone like Ashish Dhawan—with a Yale, Harvard background—would have over a kid studying in a government school in Shahdara in northern Delhi.

“Yeh bachche nahin seekh sakte hain. Inke maa baap ko dekho. Inke baas ka nahin hai [These kids can’t learn. Look at their parents. They don’t have the capability],” this is what the principal of a government school in Shahdara told Dhawan.

You are allowed to think the principal is guilty of oversimplification. Surely, there are enough and more examples of kids from poor families making it big. But once you consider the probability of this happening on a regular basis, you will realise that the principal does have a point. It is very hard for kids from poor families to get the sort of environment that would allow them to focus on their studies and have a peer group that thinks about education. “When a poor kid does well, we celebrate it on the front page of newspapers; make a movie about it. While the failure of a kid from a well-off family to get into a good college is merely a hushed whisper,” says Dhawan.

Is it possible to make good education democratic? Nothing would level the playing field more than good quality education that isn’t dependent on the parent’s ability to pay. This is the vexing challenge that Ashish Dhawan is tackling. There is little in Dhawan’s background that tells us that he is the man for the job. He is a very wealthy man—in 2010, the fourth-highest taxpayer in the country—and comes from a profession that is in some ways the epitome of capitalism: Private equity. He is quite aware that he doesn’t know all the answers. He is clear about one thing though. “I think we blame the parents [of poor kids] too much. What we need is some of our best teachers teaching in the government schools,” says Dhawan.

Right now, even some of the better private schools don’t have access to good teachers. This is not deterring Dhawan and he wants to move the needle on schools that will deliver good quality education at low prices. He also wants to train teachers better.  A clear example of Dhawan’s approach is seen in his funding of Gaurav Singh, founder, 3.2.1, which if things go to plan will be a charter school-like chain. In the US, charter schools have a little more freedom than traditional schools to decide their curriculum in exchange for setting clear outcomes that can be measured and monitored.
For instance, a charter school can state that 80 percent of its fourth standard children will be able to read and do mathematics of a certain level.

Is this approach a big deal? Yes. According to the 2010 ASER report done by Pratham, an NGO focussed on education, only 50 percent of Class V children can read standard II text. Approximately 62 percent of standard V students in government schools and about 50 percent in private schools cannot do division. If this doesn’t tell you about the dire situation of education, nothing else will.

Gaurav Singh’s goal is to remove the education inequity in India. Singh was a Teach for India (a non-profit that recruits college graduates and professionals to teach in low-income schools) fellow and finished the fellowship in 2011. “That’s when I met Ashish who was on the board of Teach for India. The more we talked the more we realised that we were thinking about primary education in a similar way,” says Singh. Both Dhawan and Singh were certain the traditional, input approach of measuring education was wrong. Here, the government specifies that the school should have X acres of land, Y number of labs, thinking that if inputs are good then the output should be good too. Just because someone uses a Babolat racquet, Nike shoes and drinks Gatorade, he does not become a Rafael Nadal. There is a lot of coaching and motivation, nothing a good teacher cannot inspire.

Now, how do you function within the highly regulated sector and yet try and make a difference measured on the basis of outcomes? The answer was to understand the charter school system in the US. Singh won the Fisher Fellowship awarded by the Knowledge Is Power Program (KIPP) and went to the US to learn how the charter schools worked in low income areas. Now, backed by Dhawan’s money from his education fund, Central Square Foundation, he plans to set up a series of such schools.

The first 3.2.1 school has come up in Mumbai’s Crawford Market area. This school is run on the PPP (public-private partnership) model where the premises are given by the municipal corporation and 3.2.1 brings in its own teachers and teaching techniques. The medium of instruction is English. This year, 85 children have been taken in the senior KG class for 2012-13. Every year, from now on, a new standard will be added for students. “Before Ashish started Central Square, 3.2.1 would have had a hard time raising finances. Central Square and Ashish have understood what we are trying to do and that is really helpful,” says Singh.

In some ways, Dhawan has been preparing for this avatar all his life. When his father was working in Kolkata, he studied at St James where John Mason, the then headmaster, inculcated a love of mathematics in him. Later, he learnt mental mathematics from Somnath Bhatia and he was so influenced by the profession that he wanted to be a teacher. “My mother quickly realised where it was all headed and extinguished the idea from my mind,” says Dhawan.

He then started his journey to become a finance suit, completing a degree in maths from Yale and an MBA from Harvard before joining Goldman Sachs. That was before Goldman was seen as everything that was wrong with capitalism. Dhawan volunteered to teach maths to kids in Harlem. But he is the first to admit that it was not a part of anything larger, at least then. He returned to India in 1998-99 and set up Chrysalis Capital and went on to become one of India’s most successful private equity fund managers. However, he had set a goal of doing something new by the time he turned 45. He made the switch well before that. He started setting the stage for his exit in 2010 itself.

A very organised man, Dhawan planned his new innings well. The key was to convince his colleagues at Chrysalis and his limited partners (investors in Chrysalis) that he will move on. He’d remain associated with Chrysalis for some time to ensure continuity. It is a measure of confidence that investors have in the team that Dhawan built that Chrysalis raised a new fund, its sixth, of $510 million without Dhawan.

He had become associated with Teach for India in 2008 itself—he joined the board in 2011—to understand the current issues in education. There he worked with people like Shaheen Mistri and Girish Bhakoo and this helped him understand where he could contribute most. Dhawan applied what he understands best— investments—to entrepreneurship in primary and secondary education which focussed on learning outcomes. This is where his experience in teaching kids in Harlem came in handy. Some of the wealthy investors in the US had seen Dhawan’s interest in education and had told him that if he ever wanted to do something, they would be willing to help. When Dhawan started Central Square, he knew where to go.

He soon realised that organisations like Pratham and Centre for Civil Society were trying to improve policy. For instance, Pratham started the ASER study that measures the impact of education expenditure and tries to suggest where the system is falling short. Someone like Parth Shah of the Centre for Civil Society is very vocal about the difficulty of setting up a school. “You need 36 licences to start a school,” he says. So while millions of kids demand education, the supply of schools just isn’t there.

Dhawan has chosen to attack the problem within the current policy framework. It’s like taking another private equity risk. He doesn’t say this but knows that with more focus on changing education policies, the sector will see a reform and decontrol somewhere in future. He can’t wait till then to prove his model. So he has decided to start testing his theories already through ventures like 3.2.1.

Parth Shah welcomes Dhawan’s plans, but cautions that without policy changes, large change will not be possible. “I understand the limitation of my approach but I have always been a votary of learning by doing. And so the current approach helps us understand what works better,” says Dhawan.

Sheela Prasad, who is the city director of Teach for India in Delhi, says Dhawan has brought two strategic changes. First, he is focusing on training teachers, which was an ignored area. The second area where he has begun to have an impact is getting smart guys to join the education sector. “With someone like him around, better quality of people are beginning to consider teaching,” says Prasad. “I think the biggest part of improving something is having the belief that it can be done. With the sort of minds I now see trying to solve Indian’s education problem I think that belief exists,” says Dhawan.