Bhimsen Joshi: The Voice That Crossed the Vindhyas 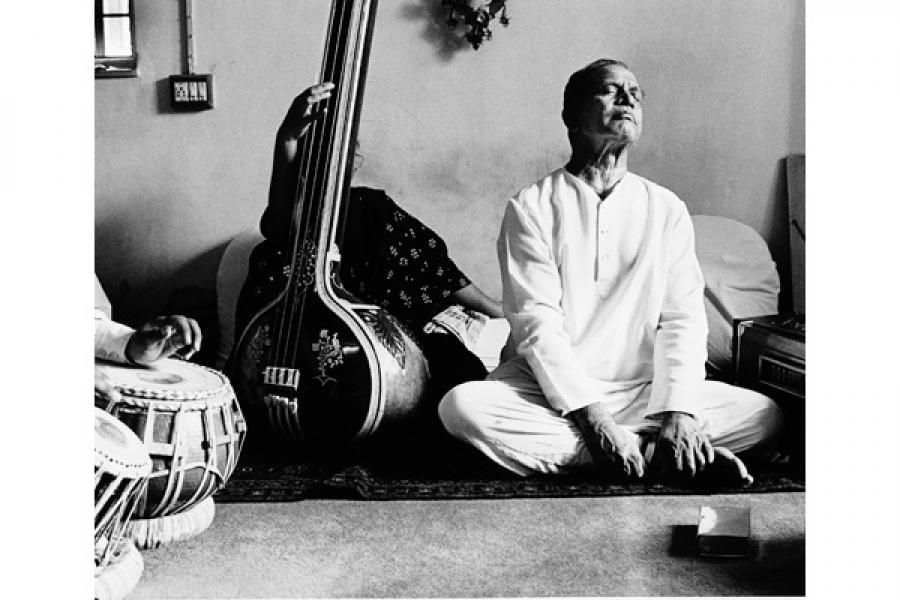 So who can be described as the voice of India? Arguably it would have to be Lata Mangeshkar and M.S. Subbulakshmi. At least 70 percent Indians would have loved their voice and their singing. In the age of coalition governments that’s as good a majority as we will ever get on anything. Now try the same question but with a gender twist. Who can be described as the male voice of India? The certainty disappears.

S.P. Balasubrahmanyam — great singer — doesn’t cross the Vindhyas frequently enough. Yesudas had a great run in the Seventies but only for a brief while. The great G.N. Balasubramaniam went virtually unknown to large parts of the North. Madurai Mani Iyer, God bless his quarter-tones, would draw a blank in most parts of India. M. Balamuralikrishna is a legend, but would again stop short of Narmada. Kishore Kumar, in his hey days, was reasonably popular down south and perhaps still is to an extent. Ditto for Mohammed Rafi. But it is doubtful if they ever held the popular imagination there.

That’s why Bhimsen Joshi is so important. His voice travelled right across India. He was, perhaps after Ustad Bade Ghulam Ali Khan, the one singer who caught popular imagination even though he was a classicist. His popularity down south is much more than what Ustad Bade Ghulam Ali Khan ever had. For many, Bhimsen Joshi’s mass popularity was because of television, because of his participation in public service films like Mile Sur Mera Tumhara and Baje Sargam aired on Doordarshan in the late Eighties. That might sound like blasphemy but reveals a deeper truth. He could take a classical ditty and deliver it in a manner that just about anyone could appreciate. It wasn’t unusual for people to use their fake baritone to try and sing Jo Bhaje Hari Ko Sada after they left a Joshi concert. “Even in those Doordarshan films where many stalwarts performed, his portions stood out,” says Shubha Mudgal, a Hindustani classical vocalist.

Truth be told, classical music, especially Hindustani with its accent on improvisation, can be terribly boring and tedious if it falls in the wrong hands or throat. Repetitive phrasing, wooden singing and unimaginative development (badhat) are some reasons why the laity doesn’t warm up to this form of music. Joshi could never be accused of this. He knew what could catch his audience’s ear.

“It is hard to describe that attribute. It could have been a well-timed murki [a mini-cascade of notes] or a well-positioned khatka [playful use of adjacent notes],” says Mudgal.

Indeed, Joshi understood that the dry and rigorous terrain of classical music needed the drip irrigation of alankaars (ornamental movements) to keep the listener alive.

One of life’s more thrilling moments is to experience the profusion of glide notes simulating zero gravity in the listener’s consciousness while listening to Joshi’s Shuddh Kalyan. G.N.  Joshi, who was the artiste and repertoire person for HMV from 1938 to 1970, recalls in his superb book Down Melody Lane that way back in 1944 — when Joshi was just 22! — he was already a master at presenting a song. And he began his recording career recording Hindi and Kannada Bhajans. He soon graduated to recording a poem, Uttar Druva Dum, written by D.R. Bendre.

At that time, he had not yet established his credentials as a traditional classical singer, but his voice and his stylish singing later found its way into his classical delivery as well. That does not lessen his rigour, only increases its lustre.

Much has been made of his brilliant voice; and yet when you ponder over it you are struck by how oversized it is, especially in the middle octave. The voices of singers like Kumar Gandharva or Mallikarjun Mansur had a quicksilver quality and Jasraj a spiritual gravitas, but Joshi’s voice had raw power and that’s where the intriguing part of his music came from.

As he began the development of a raga he would try and keep the raw power of voice on a tight leash, merely exhibiting a quiet menace. And then as he moved into faster paced part of the raga he would let it rip, his voice bucking across octaves at tremendous pace. The transition of his voice from a filly to a stallion, in the course of an hour, blindsided listeners into submission. Now of course, he is on to eternal music and his listeners have to make do with the silence. Damn!