Umberto Angeloni made Brioni into a pillar of luxury menswear. Now with the Fosun-backed Caruso label, he has designs on doing it again 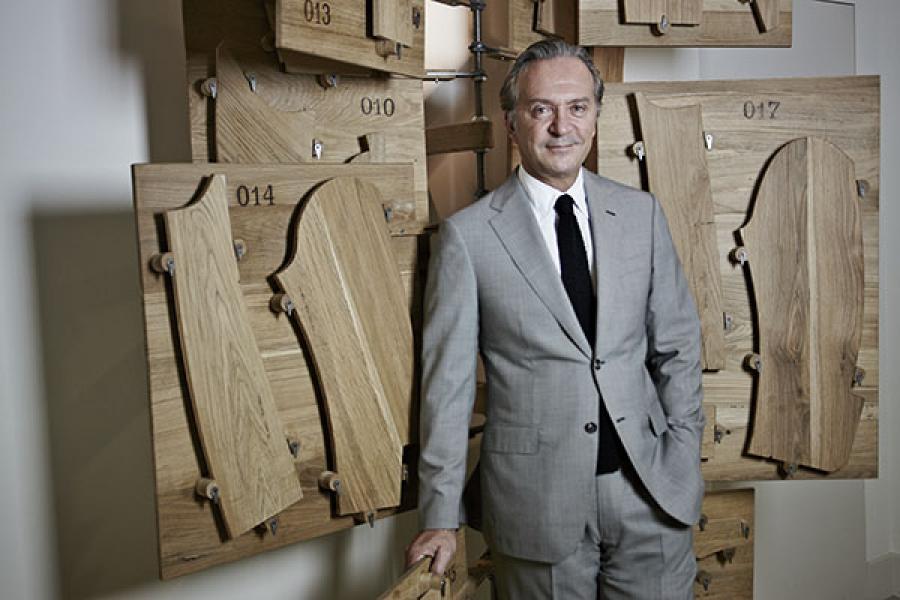 Image: Fulvio Maiani for Forbes
Behind the seams: Angeloni is applying lessons he learnt at Brioni to make Caruso into an elite menswear brand

Umberto Angeloni wants you to touch everything—to feel the woolly heft of a Prince of Wales check jacket, the creamy silkiness of the super 180s. It is late November, two days before his Caruso store, the first in the world, will open on 58th Street of Madison Avenue in New York City. The former gallery space is a sprawling, curated showcase for Caruso’s haute Italian tailoring, with 11,000 square feet, 15-foot ceilings, airy, exaggerated distances between displays and a vivid aura of understated, cosmopolitan wealth.

Caruso is a high-profile second act for the 62-year-old Angeloni. As the longtime CEO of Brioni he multiplied the Italian menswear brand’s revenues 10-fold between 1990 and 2007, and made Brioni the suits of two James Bonds (Pierce Brosnan and Daniel Craig). In Angeloni’s humble estimation of his tenure at Brioni, he “brought it to the number one spot in fame in the world of luxury menswear”.

It was a long way down, then, when the family ownership decided to install two of their own as co-CEOs in 2007. Angeloni says he informed them that “you can have three CEOs, or 10 or 15. I am gone”. The split was acrimonious, well covered in the fashion press and made all the messier by the fact that Angeloni’s wife, Gabriella, was a Brioni family member—her brother was one of the new co-CEOs—and that the couple controlled 20 percent of Brioni’s shares.

Now, at least publicly, Angeloni views his ouster as just a bump in the road: “When people asked me, ‘What are you doing next?’ they didn’t mean, ‘Will there be a second act?’ They meant, ‘What will you do that’s even better?’”

What Angeloni did was stage a kind of end run. Rather than attempting to rejigger another high-profile brand, he went anti-glamour, back to the fundamentals, and bought a controlling interest in a semi-obscure clothing factory near Parma. If the outfit’s bland moniker, Fabbrica Sartoriale Italiana, sounds like a front name, in a sense it is: The place quietly crafts high-end suits and then sews the labels of major fashion brands and department stores on them. For Angeloni this buyer’s-own-brand business meant welcome cash flow, of course, but for a man of his ambitions it has also provided the perfect springboard.

Founded in 1958, Fabbrica Sartoriale employs 600 people, in particular the kind of handcraftsmen Angeloni needed to support his comeback. And the factory’s 13 clients, for which it produces a breathtaking 4,000 prototype jackets a year, provide an invaluable window onto the marketplace and a constant motivation to keep up. As Angeloni puts it, “The mission of Fabbrica Sartoriale Italiana is to be the finest laboratory for design and material research. Five percent of my workforce, 32 people, are full-time R&D.” It is the nature of a business in which “our clients bring us visions that we try to transform into wearable items”.

But Angeloni had a vision of his own, and it included fashioning a label named for one of the factory’s founders, Rafaele Caruso. “It had never promoted its own brand,” he says, “which doesn’t mean simply putting its own name on a suit but creating an identity for the brand. That is what I’ve done.” 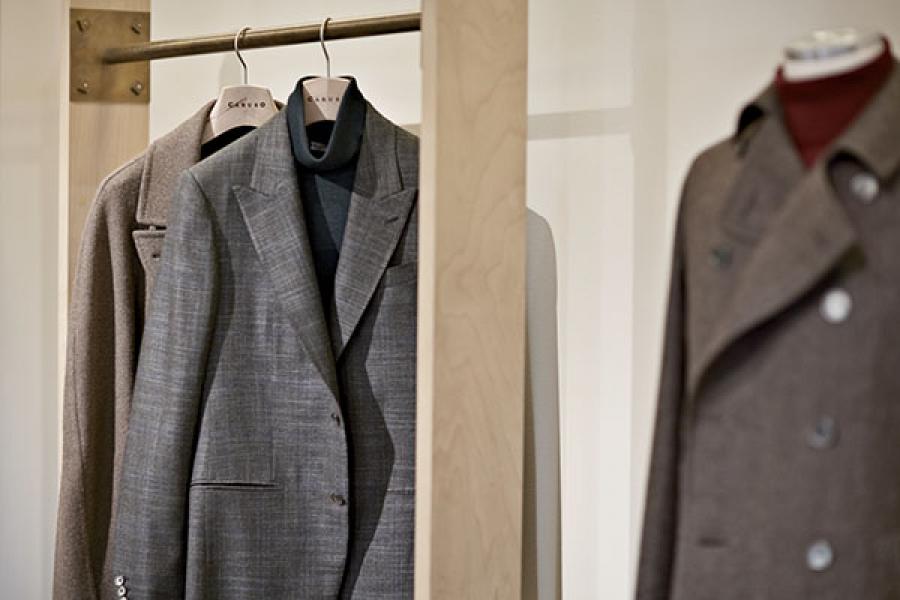 Image: Fulvio Maiani for Forbes
Handmade detail: Hanging out inside the Caruso showroom in Milan

A discussion of Caruso’s emerging brand message can send Angeloni, a man with an elusive, philosophical turn of mind, off onto discourses about “the 200-year evolution of the men’s costume”, but the bottom line is this: He believes that there are only a handful of other makers—three at the most, he says—whose garments offer the same level of handmade detail as a Caruso suit. His tailors spend 15 minutes on each buttonhole, including the sleeve buttonholes, and hand-sew the edge stitching, the armholes and the bottom of the lining, all details that, combined with the softness of the internal materials, give the jackets a structural suppleness that he believes no machine can replicate.

But there’s something those few other high-hand-touch brands themselves can’t replicate: Caruso’s prices. The old Umberto Angeloni laboured to push Brioni’s price tags into the stratosphere: As much as $9,000 for a suit. The reborn Angeloni preaches a refreshing realism. Caruso’s suits start at $3,250—although they can reach as much as $14,000, depending on the fabric.

“Because we manufacture for others, we have to have total cost control,” he says. “We have to always be conscious that whatever costs we add will provide value. There are some manufacturers who think that because there is a handmade component it can command any price.”

That is not to say that Angeloni and realism are always the most consistent of companions. There is, for example, his “conceptual brand”, Uman (the name comes from Umberto Angeloni), for which he used data from the Alvanon Group’s measurements of thousands of contemporary men to devise a new suit proportion and a 1-through-8 sizing scale. Uman produces only one or two new jackets a year, always in blue (“the colour that expresses the infinite, depth, the soul”), and each comes with two books, the philosophical Lexicon, by Angeloni himself, and a book by an outside author commissioned especially for that jacket.

“Uman is an extreme step in one concept,” Angeloni explains, “one colour, one shape for a particular body type that we have identified. Caruso is a brand that dresses a more diverse community.”

And if all goes according to schedule, that community will grow exponentially. The recently obscure factory label from Soragna is now ready to go global.

“Having completed the acquisition of Caruso [in 2012] and streamlined it by adding talent in design, talent in fabric research and so on, I needed to go to the next level,” says Angeloni, who notes that Caruso sales were $70 million in 2014. “When you want to project the full philosophy and concept of a brand, you need to have your own store and feature that entirely.”

Angeloni began casting about for a well-capitalised partner, and in 2013, he hooked a big fish: China’s largest privately owned investment group, Fosun. “They do huge deals,” Angeloni reflects, “but they know how to find truffles, too.” (According to some accounts, the group’s interest was aroused when Fosun’s head of global investment, Patrick Zhong, was impressed by a suit he had ordered.) With Fosun onboard with a 35 percent stake, Caruso is now looking to open a new store every six months, including Milan next winter, Shanghai by mid-2016 and so on.

“This is more than our first store,” Angeloni says, opening his arms in the New York flagship. “It’s our embassy!”