As Rhythm House becomes the latest cultural icon to fall by the wayside, the chairman of Mumbai's musical cornerstone shares his 45-year-old journey with the store 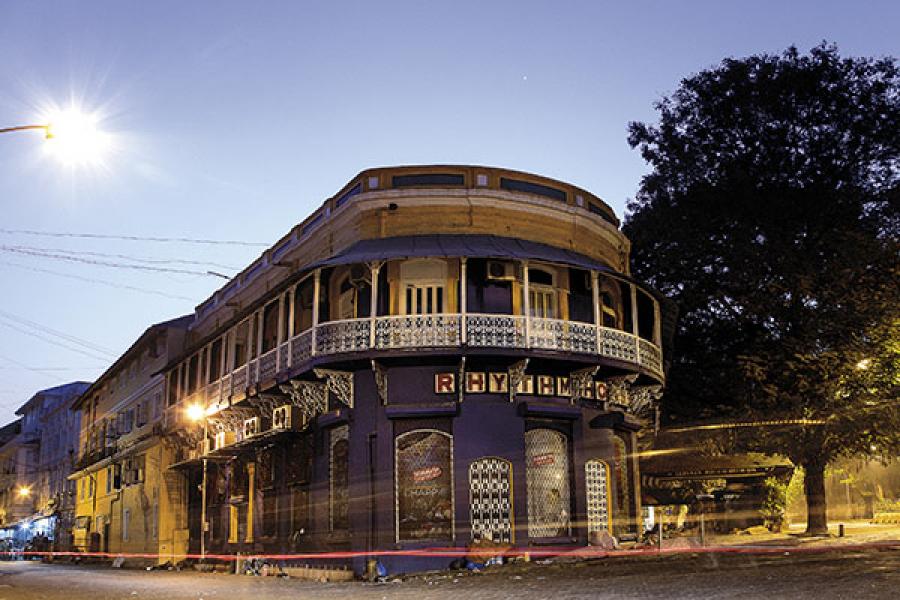 Image: Joshua Navalkar
Rhythm House at Kala Ghoda was a place of pilgrimage for music lovers
When Amir Curmally received a phone call from his brother Mammoo in 1975, he was faced with a big dilemma. Amir was a senior manager in the advertisement department of the Imperial Tobacco Company (ITC) in (then) Calcutta. These kinds of jobs, with a good salary and perks, were few and far between in socialistic India. And here was Mammoo, calling from (then) Bombay, asking him to quit and move back to join the family firm.
Not only would he have to quit Calcutta and the boxwallah lifestyle, but also relocate. And for what? To help Mammoo run Rhythm House, a music retail store that was doing quite poorly. The founder of the company, Suleman Nensey, had passed away and Mammoo, who had been brought in as a partner, could not manage on his own. If you don’t return, said Mammoo, I will have no alternative but to bring in an outsider as a partner. That settled it and Amir, with a new wife in tow, upped and came to Rhythm House, a place where he stayed for nearly 40 years.
Amir says he doesn’t regret that decision. “At best I would have continued in ITC till I was 60; at Rhythm House, I have continued to work till my 70s and met all kinds of interesting people.” The business has had its ups and downs—and lately, it has been a one-way slide to the bottom—but, “this is a business which you need to fall in love with”.
Sitting in his mezzanine level office, the 75-year-old Amir, along with his staff, is working on the nitty gritty of closing a business. On the ground floor, the shelves which were always full of music from all over the country and the world, now wear a forlorn look. Large posters announce a Goodbye Sale that will go on till February 28, when the shop will be closed for customers. Many walk in to take a last look around the place which they visited for years, perhaps generations. Behind Amir, an old record player and a large porcelain statue of Nipper—the famous dog who adorned the His Master’s Voice label—are casually placed on a shelf. But nostalgia can wait—a lot of paperwork has to be tackled.
The announcement that Rhythm House, a fixture at the Kala Ghoda precinct in Mumbai, would be shutting down forever set off waves of memories among its countless fans who flooded social media with their stories. An Amul hoarding said it well: “No Rhythm, Only Blues.” Many recalled their long association with the shop, going back to the age of shellac, when Rhythm House stocked the latest music imported from the West. That was followed by vinyl, which was replaced by cheap cassettes (audio and video) and then finally by the compact disc (CD) and DVD; Rhythm House kept pace with the changing times that drew patrons from all over the world.
Ironically, it was changing technology that finally struck the fatal blow. A newer generation discovered the joys of MP3 and downloading movies and music. Aficionados still continued to buy old formats, but the arrival of online retailers was the straw that broke the store’s back—footfalls reduced dramatically and like many other brick and mortar stores, Rhythm House succumbed.
The Curmallys—Amir is the chairman and his nephew and elder brother’s son Mehmood is the managing director—could see it coming. They had weathered many storms through the 75-year existence of the store, but rarely had things been so difficult. An unpleasant decision had to be taken. 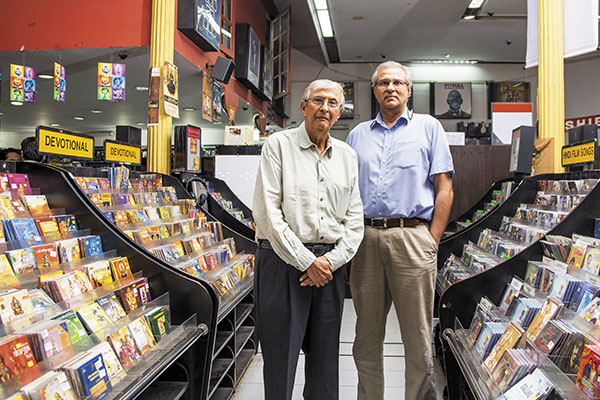 Image: Joshua Navalkar
Amir Curmally (left), chairman of Rhythm House, with nephew Mehmood
Rhythm House began in the early 1940s as a store selling 78 rpm records made of shellac and produced in the West. Though Hindustan Records, based in Calcutta came into existence in the early 1930s, most of the records sold in India were imported. Playback singing had not yet taken off in any big way and the film industry’s output was modest. Listening to music at home was an expensive hobby, since it required a gramophone and a constant supply of records—only the rich could afford it.
“I remember meeting Maharani Gayatri Devi of Jaipur in the shop and she told me, ‘Young man, there was a time when Rhythm House used to come to my room at the Taj, now I have to come here’,” says Amir.

Along with the records, Rhythm House also sold Wurlitzer Jukeboxes, which became popular with not just the super rich—a maharaja bought two for his palace—but also with Irani restaurants in then Bombay. Customers could drop a token and play the record of their choice in the multi-hued jukebox. 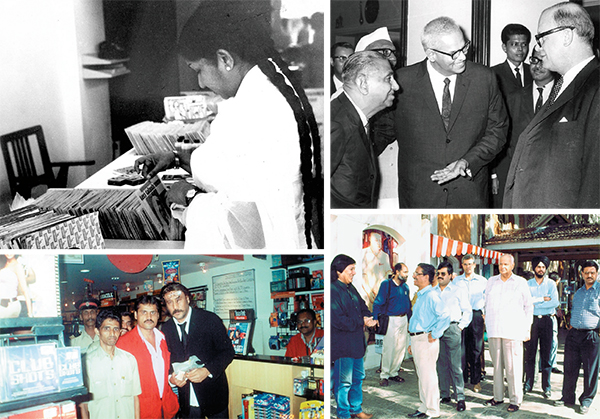 In 1946, encouraged by the rapid growth of cinema in India and the prospects of a big market as gramophone players became more widespread, the UK-based Gramophone Company set up base in Calcutta to produce records under the famous His Master’s Voice label. The imagery of Nipper near the horn of a gramophone soon became ubiquitous. Middle-class families were now buying players and with the advent of vinyl as the global standard for records, sales took off. The long playing vinyl, played at 33 1/3 rpm speed, could hold many more songs than the old 78 rpm record, which had only two.
Even so, Amir says, in the 1970s sales at the shop were indifferent. Music was not a priority purchase and remained somewhat of a luxury. “When I came back from Calcutta, there were days with barely anything sold. My brother told me about how one day nothing was purchased and Mr Nensey had to buy a small item.”
But Rhythm House had become a place of pilgrimage for its many loyal followers. At Rs 45, an LP was out of reach for most people. It was popular with students from colleges nearby who came to listen to the demo copies of the latest music in the sound-proofed cabins in the shop. My own memories are of picking up a new release by the big rock bands and playing them to my heart’s content in Rhythm House—the kindly staff did not intrude. To be able to play new music on a good record player in complete privacy—this was a luxury other shops did not provide. “We knew, of course, that many a couple caught a bit of private time in those booths—there was so much graffiti on the cabin walls,” Amir says.
Rhythm House had fans abroad too, who regularly ordered Indian music that was shipped to them. “One came from Dubai, called for a new record player and the latest records for a party at his suite in the Taj. When he left, he distributed everything to his Indian friends,” Amir says.
Rhythm House by then had become the go-to place for not just music buffs but also musicians themselves. The big names of the Hindi film industry used to come by to check out the latest international trends.
In 1962, Philips of Holland had developed a new recording and storage format—the cassette— but it was not until the 1970s that pre-recorded cassettes made their appearance in any big way. These were still expensive, but their mass production and the availability of cheap players changed the game. The big boost to the music business—and to Rhythm House—came when an entrepreneur, Gulshan Kumar, began making cover versions of popular songs. It was blatant piracy, but Kumar did not care.
Gramophone Company of India sued him and he lost, but piracy was not a cognisable offense and going after the nimble pirates—who had grown in numbers—was not easy.
Soon T-Series, the label under which Kumar produced his music, began selling original music at prices as low as Rs 18. Technology came as a booster—cassette players were now so widespread that every car, bus and autorickshaw had them pre-installed. “Gulshan Kumar single-handedly revolutionised the business by creating a new genre of devotional music and by bringing down prices. Those were our best years,” says Amir.
The compact disc came next, followed by the video CD (VCD) and the DVD—prices were high in the initial stages but massification followed when prices fell. Simultaneously, the advent of music channels and economic liberalisation boosted interest in music and consequently, sales.
Rhythm House had become such a big brand that it began releasing classical music cassettes under its own name—several young and upcoming musicians like Ashwini Bhide were first given a boost by the label. It was a shop without a peer, with a knowledgeable staff, a wide repertoire of music and an unmatched location. For many, a trip to Kala Ghoda meant a look at some art in the Jehangir Art Gallery, a relaxed meal at Cafe Samovar and some browsing and buying at Rhythm House.
The rapid growth of the internet and the easy ability to download music and movies meant there was no real need to visit a record shop. The demise was inevitable. In March 2015, Samovar, the bistro in the Jehangir Art Gallery, closed down after 50 years. In a way, Rhythm House’s death, though unconnected, is yet another marker of the end of a way of life.
The one question on everyone’s mind is—what will replace Rhythm House? Speculation has ranged from a bank branch, or a fast food joint or even a restaurant, none of which is a suitable replacement. Amir is non-committal: “We have no offers and we haven’t put any word out. Let’s see how it pans out. At the moment we have bigger things on our mind—shutting down is not an easy job.”
The writer is the author of India Psychedelic and the founder editor of thewire.in

Tweets by @forbes_india
It's a marathon, not a sprint: Uday Kotak
Sikka wants India's "bigger startups" to respect profit margins