Sim Bhullar: A head above the rest

Sim Bhullar is the NBA's first Indian-origin player. He also happens to be among its tallest 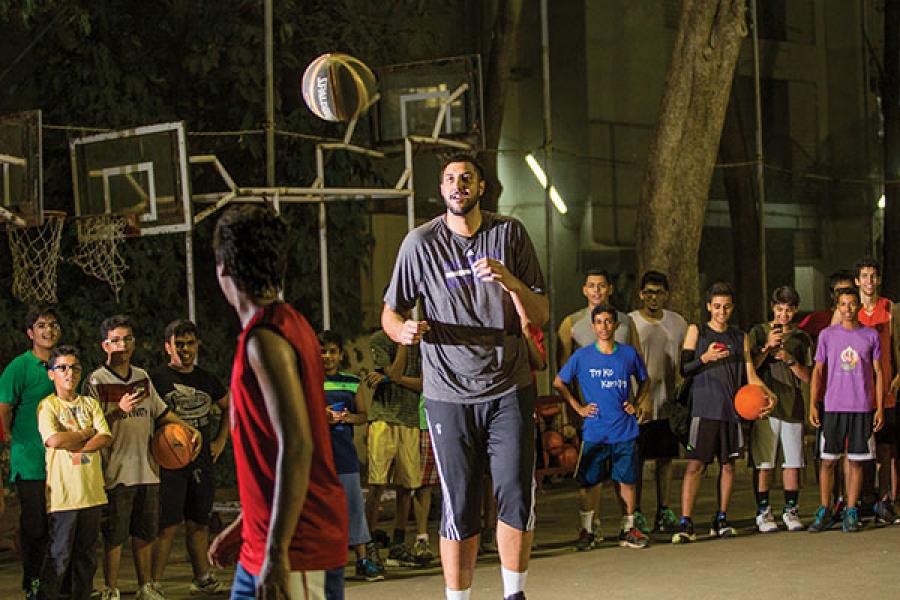 Image: Joshua Navalkar
Sim Bhullar playing basketball with members of the under-16 team at YMCA in Mumbai, as part of the Junior NBA programme

On April 7, Gursimran Bhullar got his first 16 seconds of fame.

Playing for Sacramento Kings against Minnesota Timberwolves, he spent all of 16 seconds on the court during the first game of his 10-day contract. It was only in his subsequent match against Utah Jazz that he scored his first two points.

Although it remains to be seen how Bhullar’s career shapes up, his entry into the National Basketball Association—the foremost men’s professional basketball league in North America—is being seen as something of a new beginning. And, perhaps, it is.

It is not just his 7 feet-5 inch frame that makes him an exception (he is the sixth-tallest player in NBA history). Although Bhullar’s height attracts immediate attention, his claim to fame is that he is the first NBA player of Indian origin. Basketball is not a sport that finds mass support either in India, where Bhullar’s family comes from, or in Canada, where he has spent the 22 years of his life. It is also to be noted that among Indo-Canadians, sports is not a popular career choice. Only a few names such as Manny Malhotra (of the National Hockey League) and Emanuel Sandhu (figure skating) have found a place in the hall of fame of Canadian sport, both of whom are of mixed parentage. More reason why Bhullar, both of whose parents are from India, has become the face of NBA’s promotional stint in India.

Bhullar was in India recently to promote basketball and train participants at the Reliance Foundation’s Junior NBA programme. “I am trying to spread awareness about basketball here. If we can grow interest among kids here and get more of them to play basketball, then anything is possible,” he says.

Although Bhullar is now an ambassador of basketball, the game wasn’t his first love. Growing up in the Greater Toronto Area, he recalls playing cricket in his neighbourhood. He also played a bit of baseball and floor hockey in middle school. It was only in high school that he decided to pursue basketball seriously. His elder sister Avneet would take him along to watch games of their favourite team, the Toronto Raptors.

Sports and games have been a common passion in Bhullar’s family. While Avneet played basketball in school, younger brother Tanveer (who stands 7 feet 3 inches tall) plays college basketball for New Mexico State. Meal-time conversations in the family almost always veer towards sports. This passion is what supported Bhullar’s career. “My father drove taxis for 25 years. He worked hard to support my sporting career. There were nights when I wouldn’t see him because he was out driving so that I could play,” he recollects. When Bhullar was part of the travel team in school, his mother would ensure he didn’t miss a game. “She drove for 17 hours straight to take me to games in Virginia, Washington and Philadelphia.”

Bhullar played for his college team, the New Mexico State Aggies, winning the Most Valuable Player award twice. Last November, he was picked up by the Reno Bighorns and made his D-League debut in December. His performance caught the attention of Sacramento Kings owner Vivek Ranadive and on April 2, Bhullar signed a trial 10-day contract with the team giving him an inside view of the big league.

A day after signing the contract, Bhullar woke up to a barrage of notifications on all his social media accounts. “I had around 20,000 notifications on Twitter and my Facebook and Instagram feeds were blowing up. Most of the people who had reached out to me were Indians from around the world.” This was a prologue to the massive media attention he received during his brief NBA stint. His Indian descent and height featured large in the press coverage, which included a fair amount of criticism. Analysts opined that he needed to work on his fitness, calling him “too slow” on court and a “work in progress”.

“I am definitely not affected by the criticism because when I was in high school, people said I couldn’t play in college, when I was in college people said I couldn’t play professionally. My whole life, I have been proving them wrong,” he says. “I concentrated on doing whatever the coaches told me to do. NBA players are built like tanks. I spent three extra hours at the gym every day.”

Bhullar is now back at the New Mexico State University—where he studies sociology—and is balancing academics with basketball. At heart, he remains a regular 22-year-old. Ask him about adulation from female fans and a sharp parental rap comes to his mind. “My mom would kill me if she saw me taking even a second off to think about that stuff. For now, let’s just focus on basketball,” he says. However, the one star that he would love to meet is far removed from basketball. “I love Shah Rukh Khan. If I meet him, I might go crazy.”

(The Reliance Junior NBA programmme was organised by NBA and Reliance Foundation. The Foundation is part of Reliance Industries Limited, owners of Network 18, which publishes Forbes India.)

Tweets by @forbesindia
The flight of Michimasa Fujino's life
Wipro doles out average wage hike of 7%; in line with peers