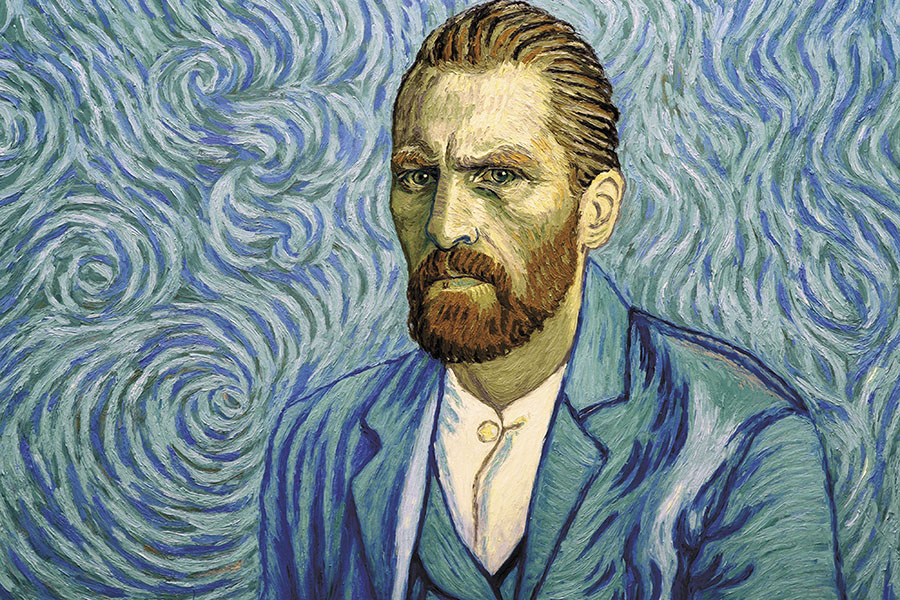 A handpainted frame of Robert Gulaczyk as Vincent van Gogh
“Great things are not done by impulse, but by a series of small things brought together.”

In October 1882, Vincent van Gogh wrote these words in a letter to his brother Theo. This was at a time when van Gogh’s life, much to the disapproval of his family, was in a shambles. He had, by then, failed at three different careers, and, having picked up the brush, was still a long way off from becoming a painter who had made his artistic breakthrough and developed his own style. But, he persisted.

The Dutchman had little idea back then that he would become one of the most celebrated artists in the world after his death in 1890. Or that he’d be regarded as one of the most influential figures in the Post-Impressionist movement and, indeed, in all of Western art. And he certainly could not have imagined that, more than a hundred years later, somewhere in Poland, a series of small things would be brought together in order for something great—and van Gogh related—to be born.

However, that’s exactly what happened in a studio in Gdansk, a port city on the Baltic coast, where frame after frame after frame of the film Loving Vincent were hand painted. Initially intended by artist and director Dorota Kobiela (37) to be her sixth animated short, Loving Vincent eventually turned into a feature film co-written and produced by her husband, Academy Award-winning producer, Hugh Welchman (42).

This meant that Kobiela had to abandon the idea of doing it all by herself, and instead enlist the help of artists from around the globe, and a team of actors. The movie, produced by BreakThru Films, and starring a cast of characters that included actors Saoirse Ronan (Atonement, Brooklyn), Douglas Booth (Jupiter Ascending, Noah), Jerome Flynn (Game of Thrones) and Polish theatre actor Robert Gulaczyk (who played the role of van Gogh), was initially captured on video at 3 Mills Studios in London and CeTA Film Studio in Wroclaw (Poland). 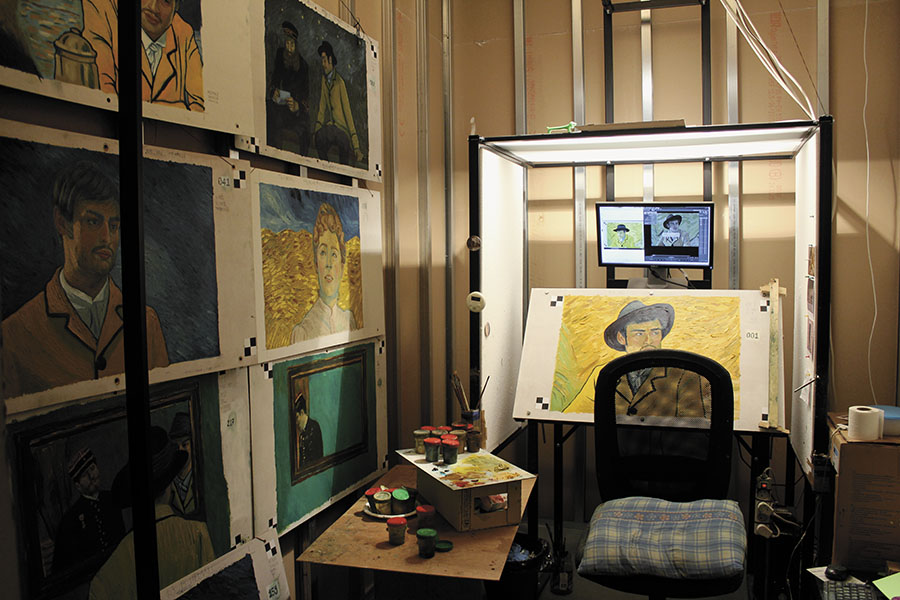 The specially designed ‘painting animation work station’ for the artists
Then a team of ‘character design painters’ worked on a set of paintings that transformed these actors into the painted characters that you see in the film. After that, 125 artists set to work (most worked in the studio in Gdansk, with a few at units in Wroclaw and Greece), painting each frame of the film, using the videos and the ‘character design paintings’ as reference. Painting each frame in the likeness of van Gogh’s Post-Impressionist style, no less. And also reproducing as accurately as possible 94 of his paintings that feature very prominently in the film, and a further 31 of his paintings that make an appearance, if only partially.

Each second of the film consists of 12 hand-painted frames, which means that over the course of 94 minutes, what you get to see are over 65,000 hand-painted frames that have come together to form something akin to the world’s most laboriously crafted flipbook.

Working as a part of the team of artists, who spent hour after hour, day after day, sitting and painting, were two Indians—Hemali Vadalia (32), an artist and animator from Mumbai, and Bengaluru-based artist Shuchi Muley (35). Vadalia spent seven months, between May and November 2016, at the studio in Poland, where she painted a total of 358 frames for seven of the film’s scenes. This involved painting approximately four frames a day, each of which would take her two to three hours. 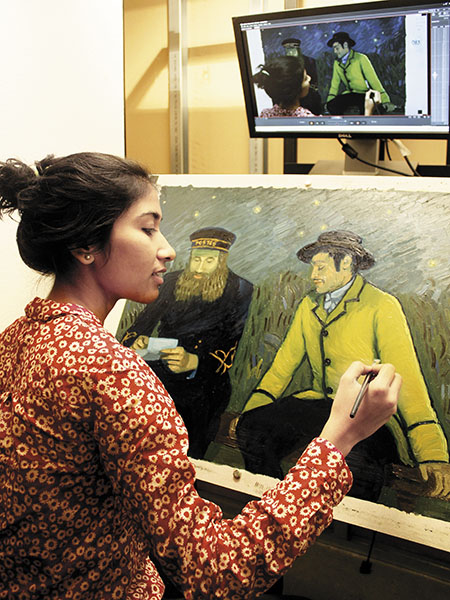 Hemali Vadalia working on a frame
But it was long before she actually put brush to canvas in the studio in Gdansk that she first heard of the film and wanted to be a part of it. “After I saw the trailer in 2012, I wrote to the director, asking if they needed artists to work on the film, but I never heard back.” It was only in 2016, after the engineer-turned-animator had already spent time studying at the Angel Academy of Art and the Russian Academy of Art in Florence, plus a semester at the Grand Central Atelier in New York, did she revisit the possibility of working on the movie. She applied again, went to Gdansk for a rigorous three-day test on painting and animation, followed by a training programme, after which she began working on the film. 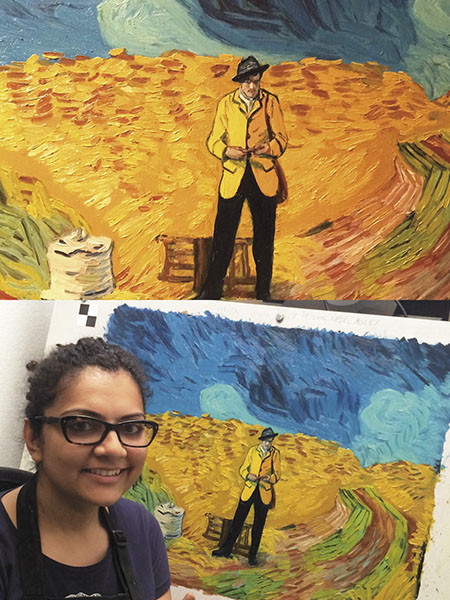 Shuchi Muley with one of her paintings
Shuchi Muley, also a software engineer-turned-artist, made it to the studio around the same time as Vadalia, after having cleared the test and training programme. But working on the film came with its own challenges, like coming to terms with the software that would capture high resolution images of the paintings. “Actually I was really scared,” laughs Muley. “I knew Realism, and for the movie you needed a less Realistic approach to painting. The second thing was that I had no idea about animation. I had never done an animation course and I had no animation background, so I was worried about whether I would understand the software.”

There was also the fact that they needed to make, in some cases, exact reproductions of van Gogh’s paintings. And even when an exact reproduction wasn’t called for, they needed to stick to the type of brushwork that the artist used himself. But the team was supportive, and there were artists and supervisors who had spent some time on the project already, who could be counted on for guidance. It helped that Kobiela, whose labour of love this was, was heavily involved in all aspects of the project, right down to how she wanted each painting to look.

Watch the new trailer of the film, and it quickly becomes clear that the artists who were handpicked to complete the task of working on the frames were as passionate as the director herself. After all, one of the main factors that motivated Kobiela to make the film was that she herself had struggled with depression, and, as a result, had enormous respect for van Gogh and the amount of work he accomplished despite his mental health issues in just a decade.

It was this passion for van Gogh’s art, and an incredible amount of commitment, that was required of all the artists in the film. “We would make a huge quantity of paint and store it in jars so that the colours didn’t change over two or three weeks. If a shot was really long, we’d take three weeks to paint it, because it could have a hundred frames in it,” says Vadalia. Each of the 831 shots in the film involved an artist sitting down at a specially designed ‘painting animation work station’ and painting on canvas. They would animate their paintings by repainting on the same canvas, until they were left with the very last frame of the shot, some of which are now available for sale on the Loving Vincent website.

As preparation, both Muley and Vadalia read van Gogh’s exhaustive collection of letters to Theo. Vadalia says it was inspiring, “You want to be a part of the film after reading his letters.” And it’s this spirit of van Gogh—the creative genius, who, at the very peak of his artistic prowess, allegedly ended his life—that the film celebrates. It also explores the mystery that surrounds his death, with a journey that Armand Roulin makes to investigate what happened to van Gogh forming one of the central themes of the film. Armand was the son of Joseph Roulin, a postman in Arles that van Gogh had befriended. He then immortalised the entire Roulin family, including Joseph’s wife Augustine, and children Armand, Camille and Marcelle, in a series of paintings simply known today as The Roulin Family.

Vadalia worked on scenes that involved the character of Armand, in one of which the young man moves across the frame. “Armand in the yellow jacket, with a blue background, where he’s moving across the frame, I think that is one of my favourite sequences, because of the contrast of colours,” she says. “And to watch a character move on canvas—that’s magical.”

Muley worked on ‘Wheatfield with Crows’, one of van Gogh’s last paintings, one that also forms an important part of the film. It was a challenging time for her, but also took her on a journey of how van
Gogh used colour to represent emotion as well as the technical aspects of his art. “Van Gogh applied paint differently. Not only with different sides of his brush, but he’d use layers—thin over thick, and thick over thin. There were so many different types of strokes in just one painting,” she says, while also citing this same scene—‘Wheatfield with Crows’—as the one that was the most memorable for her.
But though working on the film and painting all day long, every day, was an intense, time-consuming, and often exhausting process, it was something that all the artists involved in the project enjoyed immensely. “It was a one-of-a-kind experience, and it was nice to ‘live’ this process. And making a painting move is just another experience,” Vadalia remarks. When they saw the rough cut of the film with the scenes they had painted in it, it was overwhelming. “It was emotional for everyone,” Vadalia smiles. 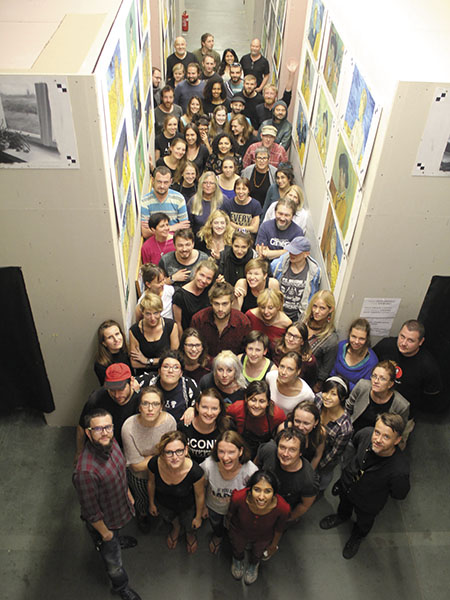 A shot of the studio in Gdansk in which the film was being painted
The fruit of their labours, Loving Vincent, was first screened at the 2017 Annecy film festival, where it received a standing ovation, and took home the Audience Award in the Feature Films category. The film opened to the public in New York on September 22, and is slated to release in the UK on October 13, after which, by the end of October, it will release across the world. The early reviews certainly make it seem like it will live up to Kobiela’s vision, and the film’s own tagline, “The truth is, we cannot speak other than by our paintings”.

What makes Loving Vincent so special, though, is the form that Kobiela decided her film would take. It is van Gogh’s art being used as inspiration, not only to tell his story, but also to create more art: Those 65,000 frames, and the movie itself that, in turn, involved real actors playing roles where they portrayed real emotions. And along the way it transformed how 125 artists see the world. Perhaps Vadalia best sums up the transformative power of a work like this: “Art is not limited to canvas and paints—it’s about how you live life.”