After amassing the world's most valuable coins over 35 years, D Brent Pogue will begin auctioning his coveted collection in May. It'll cost a mint—an estimated $200 million 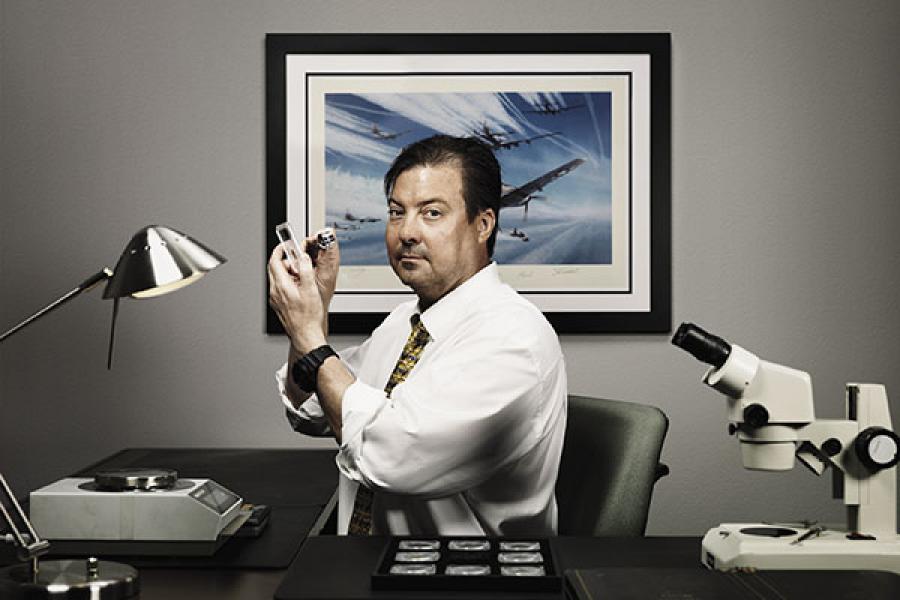 American commerce was anarchic during George Washington’s first term as president. Merchants used a jumble of coins from Europe because the United States lacked a mint of its own. So, in 1792, Washington gave 58 ounces of silver bullion to a Philadelphia sawmaker named John Harper, who pressed the nation’s first currency: 1,500 “half dismes”, stamped with the head of Miss Liberty, bearing a value of five cents apiece. The president was so pleased with this achievement that he touted it in his next speech to Congress.

Washington had good reason to be proud. “A nation’s sovereignty was symbolised by its coinage,” explains Q David Bowers, chairman emeritus of Stack’s Bowers Galleries, “and these were our country’s first coins.” Several hundred examples of those first half dismes have survived. One of the finest, still as crisp and detailed as when it left Harper’s shop, will be sold by Stack’s Bowers on May 19 in the first of seven auctions of the D Brent Pogue Rare Coin Cabinet. It’s expected to bring in up to $350,000.

While the rarity and condition of Pogue’s half disme would earn it pride of place in most coin collections, its value amounts to pocket change in what will likely be the most valuable such collection ever auctioned. The 650 coins in the Pogue Cabinet, amassed over 35 years, are “going to sail past the nine digits”, Bowers says confidently. According to pre-sale estimates, the auctions are expected to bring in more than $200 million for what New Jersey coin dealer Laura Sperber recently described as “the ultimate coin collection”.

The 50-year-old Pogue is the first to admit it didn’t start out like that. In 1974, when he was nine years old, his father, Dallas real estate developer Mack Pogue, brought home a sack of old pennies and a price guide to give the boy a hobby. Mack told his son he had paid $100 for the bag, and Brent had a seven-day option to purchase it for $110. “My business instinct kicked in,” Brent recalls. He picked out a 1915 cent that he appraised at $80 because it was so shiny. “I exercised my option within 20 minutes.”

As Pogue’s knowledge broadened and his connoisseurship deepened, his focus narrowed to the first half-century of American coinage, when dyes were still engraved by hand. By 1982, his father trusted his judgement enough to buy an 1822 $5 gold piece (above) at an auction for $687,500. (It was one of three known to have survived; the other two are in the Smithsonian.) “I knew we had to buy the coin because it would let us put together a complete set,” Pogue says. “It’s the kind of coin that could go away for 50 years once it’s sold.”

Pogue has managed the family holdings ever since, spending four decades patiently gathering the full run of early federal coinage in the best available condition—“a collection representing our country’s economic birth,” as he describes it—driven by his modern business sense. “You have to be opportunistic, and you have to have guts,” he says. At one auction that meant bidding $4.1 million on the legendary 1804 silver dollar—in the finest condition of the eight known—spending more than twice as much as had ever been paid for any coin at an auction. That was in 1999. The following year, another 1804 dollar came up for sale. Still stunned by how much he and his son had splurged the first time, Mack Pogue wanted nothing to do with it—yet Brent prevailed upon his father to spend another $1.8 million. “I thought he was going to put his hands around my neck,” Brent recalls. “I told him he had to protect his investment.”

From that point forward the Pogues just kept going, with Brent increasingly thinking of the hobby as a business and himself as a manager. “I regard myself as the steering wheel of this collection,” he says. “My family is the gasoline.” The combination has been formidable, overcoming even the toughest of obstacles: Fellow collectors who have no intention of selling.

One recent transaction took more than three years of bartering with a World War II veteran living in Ingalls, Indiana. “He had metal fragments all through his body and an amputated leg, and the last thing you want is to negotiate with a man who survived all that,” Pogue says. But the vet’s collection of 200 coins included a few key pieces that the Pogues needed, such as a 1793 chain cent—the nation’s earliest penny—in gem mint state, the finest in existence.

So why sell the family’s core holdings now? “In my mind the collection is complete,” Pogue says. “Some of these coins have been off the market for 35 or 40 years. It’s time to share them with the numismatic community.”

“These sales will be very good for the coin market,” Bowers says. “Very, very few people in numismatic history have ever put together a collection like this. It will be a once-in-a-lifetime opportunity to own some of these coins. A record price now will be a bargain in ten years.”

Tweets by @forbesindia
The sound of a new music
Maruti rebooted: Driving a new growth story