For a Little More Gurudakshina

Teachers at premier institutes deserve to be paid better

When the professors of the Indian Institutes of Technology (IIT) went on a fast to protest against poor salaries on Teacher’s Day (September 5), they thought they were displaying a flair for the symbolic. But, the irony was lost on the policy makers at the ministry of human resource development (HRD).

While IIT graduates draw huge salaries and land plum offers from blue-chip companies, the same cannot be said for the ones who equipped them to hit the ground running. Consider this: A full-time professor at the Massachusetts Institute of Technology draws $160,000 a year, an IIT professor with 12 years of experience gets $14,500 a year. 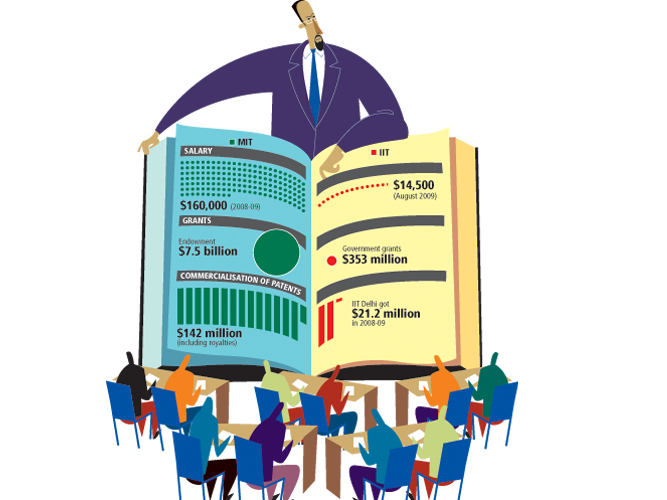 Image: Malay Karmakar
Massachusetts Institute of Technology vs Indian Institute of Technology, the war of salaries
Even accounting for the difference in purchasing power, the Indian figure comes only to $43,000. Soumyo Mukherji, who teaches at IIT Mumbai, says, “The present pay package doesn’t do enough for the growth of IITs and it cannot maintain the system over a long period of time.” An assistant professor at IIT gets Rs. 38,000 a month. They are demanding Rs. 46,000.
A central pay panel set up under former Indian Institute of Science director, Goverdhan Mehta, recommended a slew of incentives apart from the salary hike, the first since 1999. Yet, the HRD ministry ignored most suggestions. The government has to step in fast. Over 20 percent of teaching positions are vacant in IITs. And to be honest, the professors deserve it.
What Experts Say
“It’s sad that they should demand it, they should have been given even before they asked,” says Ashok Misra, former director, IIT Bombay. Others say, do away with collective bargaining and pre-set pay scales. P.V. Indiresan, former Director IIT Madras, suggests, “Each teacher should have an individual contract with IIT, and salary fixed according to individual’s ability.” This would also solve the issue of attracting super-star teachers from around the world, an area where IITs haven’t been good at.
But Mukherji says that it will be too difficult to come up with the right metrics.
Our Take
In the long run, IITs should adopt a tenure system like the one at MIT — where the ability to publish papers and attract industry funding gets one a tenure, which then gives academic freedom and employment guarantee. Another option is to encourage faculty to explore other opportunities to earn, like research grants and industry consultancy.
The option exists even now, but is not open to all. Give the pay package demanded by the faculty, but use this opportunity to fix a timeline to introduce a compensation system based on individual performance. With this, the IITs will find it easier to attract talent that is now lured by the corporate segment and it will also reward superior performance with superior returns.

(This story appears in the 09 October, 2009 issue of Forbes India. You can buy our tablet version from Magzter.com. To visit our Archives, click here.)