'I need to keep the lights on': One man's battle to keep his small business alive

For small-business owners across the country, the past week has brought a sinking feeling of catastrophe. For salon owner Zach Edwards, it has been the economic equivalent of a punch in the face 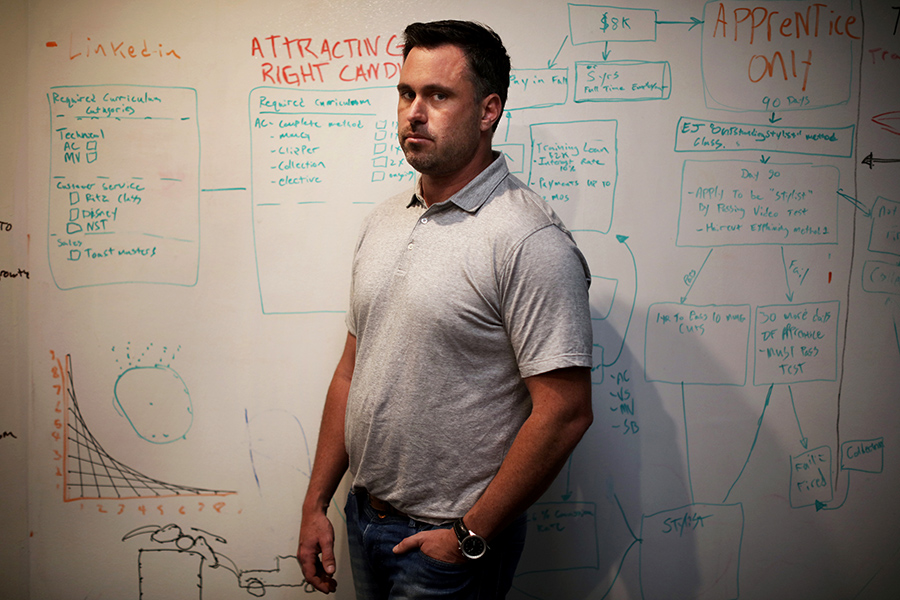 Zach Edwards, owner of Emerson Joseph, a men's salon and grooming lounge in Charlotte, N.C., March 14, 2020. For small-business owners across the country, the past week has brought a sinking feeling of catastrophe. Image: Travis Dove/The New York Times


CHARLOTTE, N.C. — It started last Tuesday, a sudden decline in the number of haircuts. By Saturday, the salon owner, Zach Edwards, was sitting in his office looking nervously at a line of empty barber chairs. “I’m really, really worried,” said Edwards, of his shop, Emerson Joseph, a male grooming salon in downtown Charlotte. “We had customers all week saying, ‘Can you cut it a little shorter? I don’t know when I’ll be back.’” For small-business owners across the country, the past week has brought a sinking feeling of catastrophe. For Edwards, it has been the economic equivalent of a punch in the face. An average Saturday brings $6,000 in business. This one brought in $1,800. So, on Saturday, as he sat watching his salon, he was also asking himself this question: How should he balance the obligation to be socially responsible about the coronavirus outbreak with the fear that closing down altogether will bring financial ruin to himself and his 20 employees? In some places, this question is being answered by decree. On Monday, New York, New Jersey and Connecticut ordered bars, restaurants and other businesses like gyms and movie theaters to close. Charlotte is getting closer to doing the same. On Wednesday, Mecklenburg County, which includes Charlotte, ordered gyms, fitness centers, health clubs and theaters to close. Hair salons are still allowed to operate, a Health Department spokesman said, as long as there are not more than 50 people there at the same time. The county had at least 11 coronavirus cases as of Wednesday afternoon. North Carolina had at least 63. While at least one beer garden, Sycamore Brewing, had closed last week, much of the rest of the vibrant South End neighborhood was bustling Saturday night even though a popular pub crawl had been canceled. But the situation is changing by the day. Last week, Edwards instructed his staff to always ask people coming through the door to wash their hands. “When we first started asking people, they would laugh a little bit. They thought it was weird,” said Perri Jones, one of the stylists. “Now they appreciate it.” Edwards knows that all the measures he is taking may still not be enough. On Friday, one of his staff members got a text message from a client that included a photograph of workers in Tyvek suits cleaning the lobby of a nearby bank building. A coronavirus case had been reported within a block of the salon. “I feel morally obligated to temporarily close,” he said. “But the practical argument is I need to keep the lights on, pay the mortgage and make payroll.” The business is his life. He used to be a client. He came because he liked the atmosphere. It had a masculine interior with brick walls and dark leather furniture, a shoeshine stand and old-fashioned barber chairs. “I cared about how I looked, and I didn’t want to feel stupid about that,” he said. But it was deeper than that. Business was what his family did. Both his parents had owned one — his father, a gas station, and his mother, a software business. His father’s eventually failed, but his mother’s became a success, counting some well-known companies as its clients, like a large coffee roaster headquartered in Vermont, where they lived. His father was bitter about his business’s failure. But his mother loved hers. “I wanted to be like my mom,” he said. It was his mother who lent him some of the money he needed to buy the salon in 2011, and his mother who talked him through it, warning him not to give in to what he said were the seller’s cascading demands. Three years later, when she fell ill with ovarian cancer, it was Edwards who talked her through her chemotherapy sessions, calling every day. She died in 2014. He still tears up when he talks about her. His business is his connection to her, and the thought of having to close, even temporarily, is deeply painful. He said he had some money in reserve but not enough to make it through some of the worst-case scenarios, like closing until late summer. And he still has his bills, like $10,000 a month in rent, $400 a month for the online booking system, and $4,500 a month for his employees’ health insurance. His largest payment is wages: $30,000 every two weeks. Stylists work about six months in training before they get a book of customers, and laying them off would mean losing that investment. Jones, 31, who has worked at the salon for five years, said she was only just starting to absorb what it might mean financially if the shop had to close for a while. “I don’t think it really started to hit us until yesterday, when we realized all these things were really starting to shut down,” Jones said Tuesday. “Everyone has their bills to pay, so are they going to pause bills for however long this goes on?” She is in the middle of a kitchen renovation, which now feels like “horrible timing,” she said. Her mother, a flight attendant for Delta on European routes, is being offered unpaid leave for a month. “It’s crazy to think about it,” she said. “It still doesn’t feel real.” Edwards has been following the news obsessively, but he has little hope that the government will be much help. He is still angry about the decisions made to bail out banks but not smaller business or ordinary people in the financial crisis of 2008. “Too big to fail — they are afraid of that,” he said. “No one is afraid of me, the small-business owner.” He added, “We are like an afterthought.”