Meenakshi Shedde, India Consultant to the Berlin, Locarno and Dubai Film Festivals, and a curator to several international film festivals tells us about some good movies to look forward to in the new year 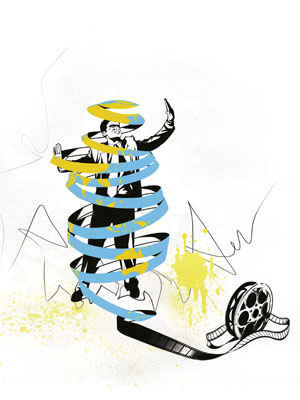 Biutiful
Alejandro Gonzalez Inarritu
Spanish actor Javier Bardem won Best Actor at Cannes for his performance in Biutiful; for all his stubbly middle age and lowlife persona, he is sexy in a way only unreliable men can be. Biutiful is a brooding reverie on the interaction between life and death. Bardem plays Uxbal, a single dad and a hustler dealing with illegal immigrants, who is dying of cancer and worried for his kids. The screenplay’s melodramatic masala would make Karan Johar blush — yet the film is incandescent. I didn’t want to see another film for a long time.

Certified Copy (Copie Conforme)
Abbas Kiarostami
A free-spirited woman (Juliette Binoche) meets an uptight British writer (William Shimell) in romantic Tuscany, who holds forth on the value of “reproduction”, a genre usually disdained. The duo end up impersonating a married couple, and their union resembles a ‘certified copy’. A deceptively simple film, Kiarostami reflects on relationships, real and bogus.
The King’s Speech
Tom Hooper
The story of the stuttering King George VI (‘Bertie’) of Britain, and his ascension to the throne (elder brother Edward VIII abdicates the throne to marry the American Wallis Simpson), after his speech therapist Lionel Logue helps him become worthy of it. Colin Firth, Geoffrey Rush and Helena Bonham Carter star in the film, acclaimed as one that humanises, even as it pokes fun at, the royals.
127 Hours
Danny Boyle
The new nail-biter from the Oscar-winning Boyle about real life solo mountain climber Aron Ralston, who was forced to cut his own arm to survive, when trapped under a boulder in Utah (rather suggested in the film than shown). James Franco sensitively plays Aron Ralston. Critic Roger Ebert gave the film four stars.

Whisper with the Wind (Sirta la gal ba)
Shahram Alidi
An Iraqi Kurdish jewel. Alidi’s images are a haunting, surreal fusion of politics and poetry. Communication is impossible in war-flattened Kurdistan, so Mam Baldar, the postman, travels everywhere carrying messages from families for their missing, beloved ones. Even radio stations are banned, and there’s a memorable image of a large tree dominating the landscape, from which dangle scores of radios, hanging by nooses.


5 INDIAN FILMS
Saat Khoon Maaf (Seven Sins Forgiven)
Vishal Bhardwaj
Based on Ruskin Bond’s story, Susanna’s Seven Husbands, Saat Khoon Maaf is about a woman (Priyanka Chopra) who kills her seven husbands, each story being set in a politically volatile period. The cast includes Irrfan, John Abraham, Naseeruddin Shah, Neil Nitin Mukesh, Arjun Rampal, Annu Kapoor and Aleksandr Dyachenko. Superbly shot by ace cinematographer Ranjan Palit, it has first rate music, including a boisterous Russian number. If the censors are benevolent, the climax will be a sublime snapshot of the ultimate in civilisation — spirituality, surrender, compassion and grace.
Pairon Talle (Soul of Sand)
Sidharth Srinivasan
Pairon Talle is a savage stab at the ‘Shining India’ myth. The Shining Indiawallahs, who live in bungalows and own acres around Gurgaon, are also those who unhesitatingly chop their daughter’s boyfriend into shreds because he belongs to the wrong caste. Told from the viewpoint of a watchman of an abandoned silica mine, it foretells the bloodbath that must ensue when India’s underclass finally rebels. Compellingly shot by S. Nalla Muthu on HD, the film draws powerful performances from Dibyendu Bhattacharya and Saba Joshi. It was at the Toronto Film Festival.
I Am
Onir
An omnibus film with four segments, the film tackles contemporary social and political issues — homosexuality, child sexual abuse, displacement of Hindus in Kashmir and the dilemmas of in-vitro fertilisation. It is powerful and moving, despite being slightly uneven. The cast includes Nandita Das, Sanjay Suri, Rahul Bose, Manisha Koirala, Juhi Chawla and Anurag Kashyap. The stories are engaging — the child abuse stories tie in brilliantly — but overall, the film holds together a bit clumsily. The film was shown at the Arsenal in Berlin and the I-View Film Festival, New York.
Memories in March
Sanjoy Nag
This could be India’s next gay coming-out film — the kind gays could see with their parents, and straights could delight in. A young man dies, his mother rushes from another city to the funeral, and slowly realises that he was gay. Deepti Naval and Rituparno Ghosh put in moving performances: As mother and lover, they do a bristly, yet delicate pas de deux as they accept their loss, squabble over memories — and end up as friends. It was at the Pusan (Korea) and Mahindra Indo-American Arts Council Film Festival, New York.
Shor (Noise)
Raj Nidimoru & Krishna D.K.
A set of loosely connected stories set during the high-decibel Ganpati festival in Mumbai, the film explores how difficult it is to live with — and without — the mafia. The film stars Sendhil Ramamurthy, Tusshar Kapoor and Radhika Apte and is produced by Balaji Telefilms. A returning NRI struggles to set up shop in Mumbai, a cricketer hesitates to bribe selectors, a good-hearted thug keeps the peace, and Tusshar Kapoor, a thug who pirates best-sellers, discovers his wife has read Paulo Coelho.

(Meenakshi Shedde is India Consultant to the Berlin, Locarno and Dubai Film Festivals, and curator to several international film festivals)