Airlines Cancel Flights and Lay Off Workers as Stocks Plummet

Already reeling from a steep decline in bookings because of the coronavirus outbreak, airlines now stand to lose millions of dollars in revenue from a dramatic decline in trans-Atlantic flights, which account for a big chunk of their business 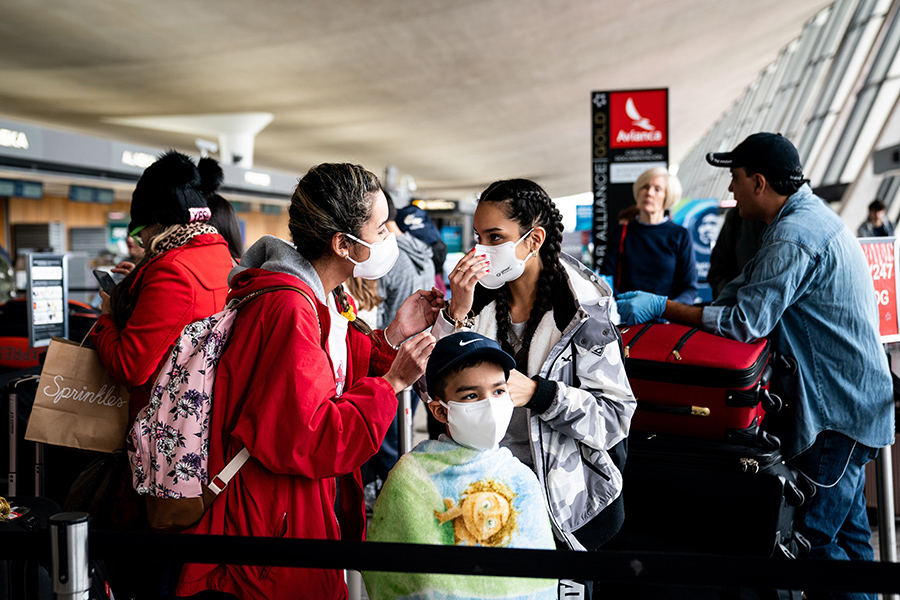 Wearing face masks, Fabiana Angulo, left, her sister Flavia Angulo, and their brother Fabio Solares, wait in line to check bags for their flight to Bolivia at Dulles International Airport in Dulles, Va., Thursday, March 12, 2020. Last week, an international airline group estimated that the coronavirus could wipe out as much as $113 billion in airline revenue worldwide, a forecast made before President Donald Trump’s travel restrictions on Europeans and other limits by countries including Israel, Kuwait and Spain.
Image: Erin Schaff/The New York Times

Airlines around the world Thursday scrambled to cancel flights, lay off workers and reassure anxious travelers, capping a dizzying period of weeks in which bookings have evaporated and investors have lost confidence in the industry.

The latest frenzy was touched off by President Donald Trump’s announcement Wednesday evening that beginning Friday night, most travelers from 26 European countries would be barred from visiting the United States for 30 days, news that sent airline stocks tumbling. Shares of United Airlines and Delta Air Lines closed down by more than 20%, and American Airlines was down about 17%. Earlier, shares of the parent company of British Airways closed down 16% in London.

Already reeling from a steep decline in bookings because of the coronavirus outbreak, airlines now stand to lose millions of dollars in revenue from a dramatic decline in trans-Atlantic flights, which account for a big chunk of their business.

On Thursday, Norwegian Air, a once fast-growing discount carrier that flies to many U.S. cities, said it would temporarily lay off half of its staff and ground 40% of its long-haul flights and 25% of shorter flights.

“Suspending travel on such a broad scale will create negative consequences across the economy,” said Alexandre de Juniac, chief executive of the International Air Transport Association, an industry group. “Governments must recognize this and be ready to support” the industry.

According to the association, last year, about 200,000 flights carried passengers between the United States and the 26 countries targeted in Trump’s order, averaging about 550 flights carrying 125,000 travelers per day.

Over the next four weeks, the ban would affect more than 6,700 flights, in each direction, according to an analysis by OAG, an aviation data provider. Delta is the airline most affected, operating 17% of those flights, according to OAG. United is next, with 14%, followed by Lufthansa, with 13%. American ranked fourth, operating about 8% of the affected flights.

Delta said that once the ban takes effect, it would temporarily suspend flights between Paris and Cincinnati, Indianapolis, North Carolina’s Raleigh/Durham and Salt Lake City. The airline will also freeze flights between Amsterdam and Orlando, Florida; Portland, Oregon; and Salt Lake City. United said it would continue to fly its existing schedule between the United States and Europe through March 19. After that, it expects to continue serving Amsterdam; Brussels; Frankfurt, Germany; Munich; Lisbon, Portugal; Paris and Zurich.

Confusion reigned after Trump’s announcement, with frantic travelers struggling to understand the consequences of the ban, which does not apply to American citizens and permanent residents and their close relatives, and airlines racing to adjust operations on little notice. The airlines would not say publicly whether the White House had notified them of the ban before it was announced.

“This action will hit U.S. airlines, their employees, travelers and the shipping public extremely hard,” said Nicholas Calio, president of Airlines for America, an industry group. “However, we respect the need to take this unprecedented action and appreciate the administration’s commitment to facilitate travel and trade.”

But others in the industry were far more critical. Sara Nelson, president of the Association of Flight Attendants, the union representing flight attendants at 20 airlines, including United, said that the airline industry was “pretty blindsided” by Trump’s announcement.

“It created total pandemonium,” Nelson said. “Airline employees had no idea what this meant, and for some it was completely disrupting their lives. They weren’t even sure if they were going to have a job in the next 24 hours or get home.”

Among flight attendants, there is widespread fear about job losses, she added. “The trajectory that this is on right now is beyond job loss; it’s about whether or not the industry can actually operate,” Nelson said. “You can’t operate a flight when no one wants to be on it.”

Even before the ban, investors were reassessing the financial prospects of airlines, several of which have sought bankruptcy protection in the last two decades.

“The airlines are in cash preservation mode, and we fully expect to see credit facilities extended and increased in the next week,” Helane Becker, an airline analyst with Cowen, wrote in a research note Thursday. “We previously stated U.S. airline bankruptcies were unlikely and in the near-term that still remains the case BUT if bookings do not improve in the next three months things could deteriorate quickly.”

Travel and tourism between the United States and Europe, including areas not covered by the ban, is a business totaling roughly $130 billion annually, according to U.S. government data.

European airline stocks also fell sharply. And shares of aircraft manufacturer Boeing, which has also been hurt by the grounding of the 737 Max and cuts in orders, closed down by about 18% on Thursday afternoon after dropping 18% on Wednesday.

Last week, the International Air Transport Association estimated that the virus could wipe out as much as $113 billion in airline revenue worldwide, a forecast made before Trump’s latest travel restrictions and other limits by countries including Israel, Kuwait and Spain.

“Airlines will need emergency measures to get through this crisis,” de Juniac said Thursday, calling on governments around the world to consider extending credit to airlines or reducing taxes and other costs.

In addition to Trump’s travel ban affecting the 26 European countries that make up the Schengen Area, the State Department warned Americans that they should reconsider all international travel, the most severe caution it can offer short of “do not travel.”

At an investor conference Tuesday, the chief executives of Delta, United and American said that years of streamlining operations had prepared them to weather the effects of a crisis like the coronavirus outbreak, and experts have said that they are more ready than their global peers.

Yet, United’s president, Scott Kirby, said at the conference that the company’s net bookings to Europe were already down 100% in recent days, about half of that coming from cancellations. The airline, he said, was preparing for its worst-case scenario — a sustained decline in revenue for the rest of the year — even though it didn’t expect that to happen.

“The financial impact of our dire scenario is worse than the post-9/11 decline in demand,” he said. “We, of course, hope that it will be better, but we’re not willing to count on that.”