Giving investors the freedom to make their portfolio according to their needs, smallcases offer tailor-made investment options 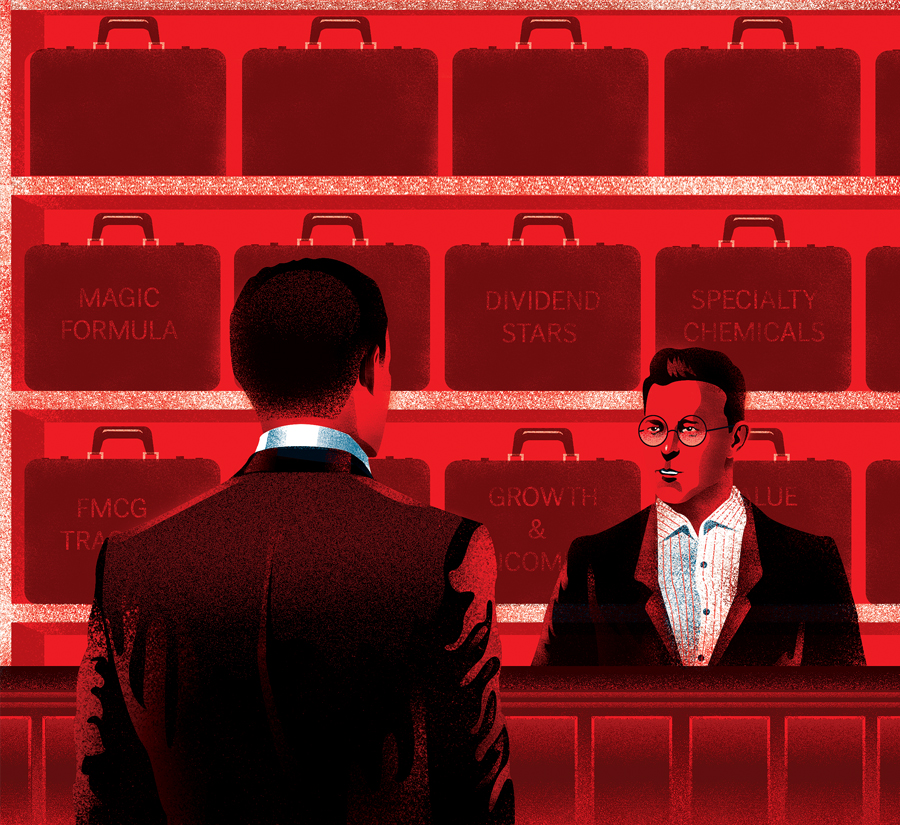 Illustration: Chaitanya Dinesh Surpur
Sharat Khurana, the 46-year-old former CFO of InMobi and FreeCharge, has been making investments for about 18 years now, and began investing directly in equities around eight years ago. Today, while a part of his money is invested by a wealth manager, he invests a part of it personally. Although he had a demat account with Kotak Securities for several years, Khurana recently moved to online broking firm Zerodha. Even more recently, he started investing in smallcases.

Khurana, who heard of smallcases from his colleagues, bought his first smallcase early this year by investing ₹50,000 in a ‘Low Risk-Smart Beta’ portfolio that will help him earn passive returns on large-cap stocks. “From sign-up to pulling the trigger, I bought my first smallcase in less than 5 minutes,” says Khurana, who has invested ₹1 lakh in smallcases and plans to invest more.

The product
Smallcases are portfolios of stocks or exchange traded funds (ETFs) that are selected, created and weighted to reflect an idea, theme or strategy. While mutual fund portfolios are also built around themes, an investor in smallcases holds shares in their portfolio as against units.

“The idea is to get retail investors to take a portfolio-based approach while investing in stocks, versus thinking about individual stocks,” says Vasanth Kamath, co-founder and CEO of smallcase, a platform where brokerages as well as Sebi-registered research analysts, investment advisors, portfolio managers and asset management companies create diversified portfolios for investors.

Smallcase has also tied up with eight brokerages—Zerodha, HDFC Securities, Kotak Securities, IIFL Securities, 5paisa, Edelweiss, Axis Direct and Alice Blue—which provide investors smallcases on their own websites. Brokers like Zerodha, which do not have a research team, rely completely on a catalogue of portfolios created by smallcase, while others use the company’s technology to showcase in-house smallcases.

Axis Direct has over 25 in-house portfolios, while HDFC Securities has over 20 in-house ones and some from smallcase. “We are with smallcase for the technology and the platform it provides,” says Nandkishore Purohit, head-digital strategy and analytics, HDFC Securities.

Customers simply have to log in through a brokerage’s credentials and start investing in smallcases. “Earlier, if I had to invest in thematic investments, I had to buy each and every stock individually. Smallcase helped me to do it in one click,” says Purohit. The shares are held in the customer’s Demat account and dividend is paid directly to her bank account.

Smallcases provide targeted diversification—which eliminates the risk of concentration and volatility—at a low cost in an efficient manner. They have low minimum investment amounts and fairly balanced asset classes.

“When you buy an asset class, instead of buying a replica of the entire market, you’re choosing some of the better stuff,” says Khurana.

Investments can be made in lumpsums, where the minimum amount is based on the price of the shares, or through Systematic Investement Plans that start at ₹5,000.

In addition, if retail investors are not satisfied by the products or returns, then they can create their own smallcase on the platform by adding stocks based on return expectations in their portfolio. While this option is, for now, only for private consumption, the company is planning to help investors share smallcases they have made.

Creating a smallcase requires thorough knowledge of the stock market, starting with the strategy for selecting stocks to timely rebalancing of the portfolio, while beating the benchmark and generating returns.

The platform has also introduced ‘smallcase Gateway’, similar to a net-banking payment gateway, which allows non-brokerage firms to offer smallcases to their customers.

Smallcase charges brokerages a flat fee on each transaction, and brokerages in turn charge their customers. Prakarsh Gagdani, CEO of 5paisa, a discount brokerage firm and a partner with smallcase says, “It is a charge to the customer. Irrespective of the value of the deal, we pay smallcase a fixed price and charge customers for transactions.”

The company
Anugrah Shrivastava used to work at Nomura India where he designed thematic portfolios for institutions. He, along with Kamath and Rohan Gupta, thought of bringing the concept of theme-based investment into portfolios to retail investors. The aim, as Kamath says, was to reduce the risk in stock investing. “If you change the mentality of people from looking at individual stocks to portfolios, the risk is reduced because the portfolio is diversified over multiple stocks.” The trio from IIT-Kharagpur incorporated smallcase Technologies in 2015.

Smallcase’s first partner was Zerodha, with whose application programming interface (API) they started working on the product by early 2016. They launched the product in July 2016, which was then replicated and introduced to other brokerages.

Kamath sees a strong trend in idea-based investments with more people wanting to know where their money is being invested. He says, “Earlier, if a mutual fund distributor came and told you to buy a mutual fund or a broker told you to buy a stock, people bought it because they trusted the intermediary or the market participant. The new set of investors coming into the markets is more educated and more financially literate. So if they don’t understand something, they won’t do it.”

Smallcase provides a platform for people to action their views into investments into companies that share their own view. For example, if an investor thinks smart cities are going to do well, they can invest in the smart city smallcase.

With 7.9 lakh customers, smallcase sees an average amount of ₹1.5 lakh being invested in the product over a course of 24 months. The company has grown almost tenfold in its number of investors. The smallcase ‘CANSLIM-esque’ provided the highest CAGR—in portfolios of over two years—of 26.16 percent (return of 100.04 percent) over a course of 2.98 years. This is followed by ‘Realty Tracker’ and ‘Bringing the Bling’ with a CAGR of 22.44 and 21.35 percent respectively over the course of 3.9 years each, as of March 1, 2020. Gagdani claims an average ticket size of ₹7,000-₹8,000 for each smallcase, with approximately 5 to 7 percent of 5paisa customers engaging on the smallcase platform, 30 percent of who buy a smallcase. Smallcase has raised ₹53 crore in funding across two rounds.

Smallcase vs Mutual Funds
Smallcase portfolios are often compared to mutual fund portfolios. However, smallcase owners buy stocks instead of units, which is the case with mutual funds. With no expense ratio, exit load or hidden costs, buying a smallcase is cheaper than buying mutual funds. In case of smallcase, there is a brokerage fee per transaction. In a parallel universe where all factors are the same, a smallcase of equally weighted shares will outperform investments into a mutual fund due to fewer charges.

A smallcase also provides transparency and control, unlike mutual funds. While the underlying pool of stocks in a mutual fund can only be seen after a fixed period, investors in smallcases can immediately see and understand what they are investing in, and can thus control the smallcases based on their strategies instead of relying on a fund manager’s strategies. Even when a smallcase is being rebalanced, it doesn’t happen automatically. It becomes an investor’s decision to buy or sell a particular share from their portfolio. Since the changes are made in a centralised manner for every investor, mutual funds can be described as ‘one-size-fits-all’ whereas smallcases provide ‘tailor-made’ portfolios with an investor’s choice of investments.

With no concept of lock-in periods, smallcases become as liquid as the stock and the market it trades in. Kamath adds, “While you can buy and sell a smallcase on the same day, even same day delivery for mutual funds is not possible.”

While mutual funds have a well-built ecosystem with financial planners suggesting mutual fund schemes, smallcase is currently only able to get people interested in idea-based portfolios through brokerages. Mutual Funds gain a point here.

The way ahead
Smallcase wants to build a network of financial advisors. Additionally, it wants to keep adding brokerage partners to its system, with a target of 15 brokerages by the end of the year. It has 45 smallcase managers, which Kamath wants to grow to 250 to 300. It also wants to take the model and replicate it in other markets.

Tweets by @forbesindia
What PT Usha, Prakash Padukone and Milkha Singh have in common
Airlines Cancel Flights and Lay Off Workers as Stocks Plummet