Why SIP inflows continue to rise, despite market volatility

With a 'Keep calm and carry on' approach, have investors become mature? 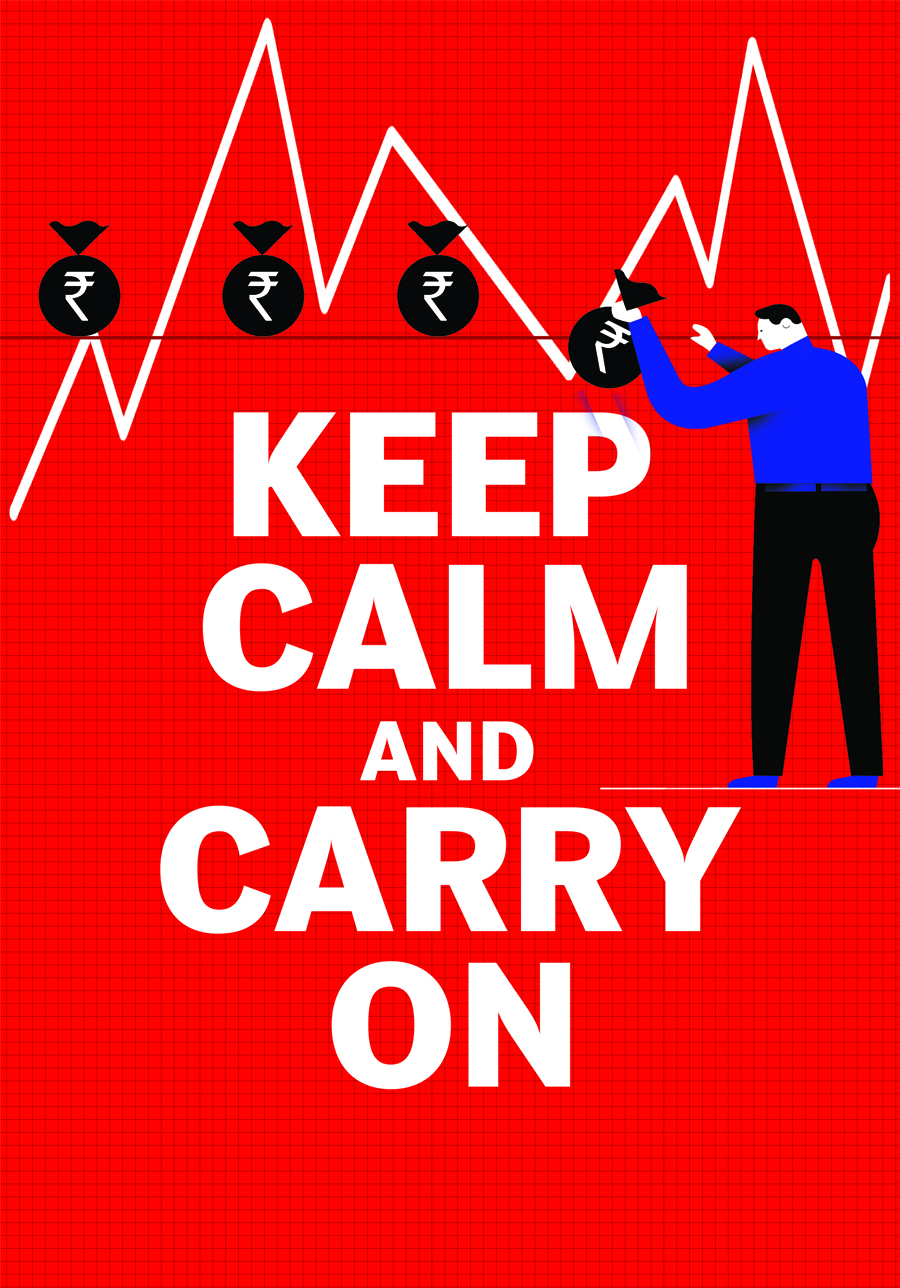 Illustration: Sameer Pawar
For five years from 2003, when Ayaan Joshi (name changed), an MNC executive, first started investing through Systematic Investment Plans (SIPs), he had a good run. Joshi had been investing about ₹1.5 lakh per month and by 2008 his corpus had grown to ₹1.75 crore. When the 2008 crash happened and the Sensex went from 21,000 to 9,000, this amount almost halved to about ₹90 lakh.

SIPs, which allow investors to put small amounts periodically into mutual funds rather than a lumpsum, have long been considered a strategy that frees them from speculating in volatile markets as well as average the purchase cost of mutual fund units. But it’s a strategy that requires some hand-holding from a financial advisor or nerves of steel to see a massive erosion in the value of an investment and yet continue to invest.

In 2008, Joshi, who was running an entrepreneurial venture, rushed to protect his investment. He pulled out ₹90 lakh, despite being advised against it by his advisor, and shifted it into debt funds, where it stood for the next six months or so even as the Sensex went from 9,000 to 16,000-18,000 in the next six to eight months.

Joshi realised his mistake and went back into the market in August 2009. “If you look at it from a compounded period it has probably cost ₹4 crore or ₹5 crore. It cost a lot to make a mistake like that. In many other periods in the last 10 years, if I had gone in and out, over a period of three months, it probably wouldn’t have cost that much, but that particular period was seismic,” he says, adding that he has since stayed invested.

A Maturing Industry
There have been several other corrections since, including the latest in the wake of the coronavirus scare, and with each correction a new set of SIP investors seems to have become more aware and wiser, says Nilesh Shah, managing director of Kotak AMC. “In 2008, people redeemed, corporates also redeemed, and they suffered losses. That year also made people wiser. Later in 2013, during the European crisis, markets again corrected sharply. Again, another set of investors learnt. So, today we have a set of investors who have become wiser from those experiences,” says Shah. 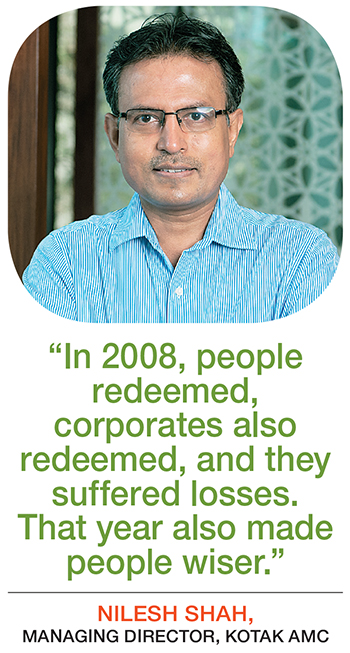 Investors today seem to be more aware of the uncertainty associated with markets. “In 2000, I remember there were posters of fund managers in front of some public places saying all those guys should be hanged. By 2008, we had lost more money than 2000 yet no one tried to crucify us. And today, you still meet people who would have lost money, but before we rise to answer them, there are many people in the audience who will say that nahi beta, correction hua hai, you just stay invested and you will make money over a period of time,” says Shah.

He recollects a recent visit to Nashik where a retired woman, who was interested in investing for growth, approached him for advice. “I told her we are going through an uncertain time where because of coronavirus things could fall sharply. And if I asked her to invest in equity and it went down 10 percent, would she curse me? And she said, ‘No, every correction is a great opportunity to invest’.”

Despite volatility and markets not performing in the past two years, inflows through SIPs have continued to grow by an average of  ₹1,000 crore in the last three years, from around ₹6,000 crore per month in 2017-18 to ₹8,000 crore in 2019-20. Awareness seems to have played its part, though investors could equally be disinclined to redeem at a loss.

NS Venkatesh, CEO, Association of Mutual Funds in India, attributes it to the financial literacy programmes by AMFI and Asset Management Companies (AMCs), and the ‘Mutual Funds Sahi Hai’ ad campaigns. “All those things have given an impetus for the investor to understand that this is part of market movements and we should not panic,” says Venkatesh. Industry experts attribute the higher closure of SIP accounts in the first half of last year to profit booking and goal-based redemptions. 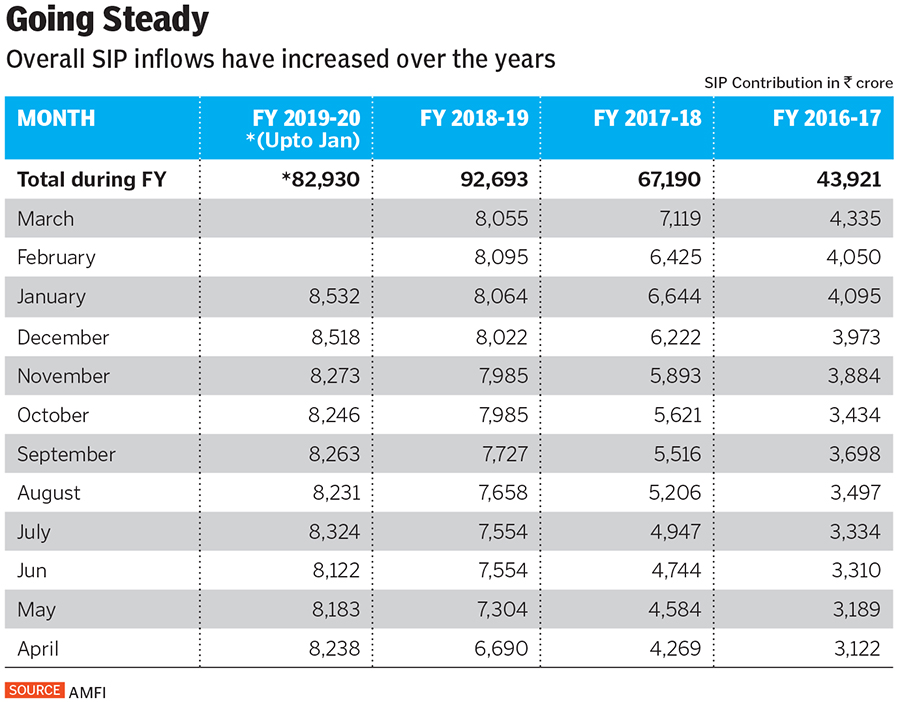 Not just investors and distributors, but the industry, too, has evolved and matured. “The industry has introduced many variants of SIP like smart SIP, SIP pause, SIP enhancement etc. People are not wary of experimenting and are looking at multiple forms of SIP,” says Jimmy Patel, managing director & CEO, Quantum Mutual Fund. And whereas distributors earlier, “at the drop of a hat used to say ‘withdraw karo’ or put in another scheme”, today they are encouraging investors to go for a long-term investment, he adds. “The message is if you don’t need the money, don’t withdraw.”

Broadly, Computer Age Management Services (CAMS) data shows that over the last three years, the percentage of SIPs being discontinued has decreased (see box). Besides, says Nilesh Shah, people who have direct SIPs have a greater chance of discontinuing during market volatility than those with regular plans.

“The other trend that is visible is if you see regular plan SIP vis-a-vis direct SIP, in the direct SIP, the stoppage rate is almost twice than that of SIPs being assisted by mutual fund distributors. If there’s no one to anchor you, you do end up taking a slightly emotional decision.” 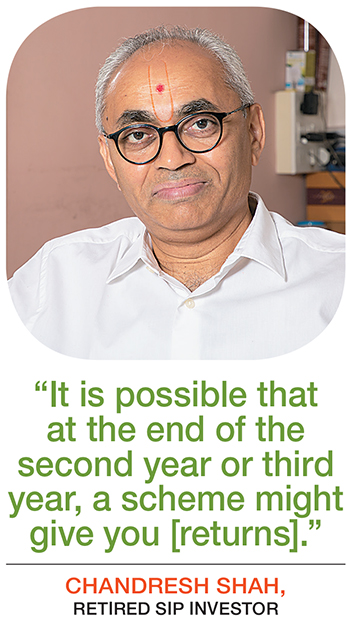 Goals and Reviews
Chandresh Shah, who was due to retire in June last year, started SIPs in 2015-16 to set up a retirement corpus. Keeping aside what he required for monthly expenses, he started investing the remaining income through SIPs with the help of independent financial intermediary Viral Kothari. “We have spent a lot of time in understanding how the investments are being done and when you get something out of it. That has helped me keep my mind cool and not look at this volatility,” he says. Along with Kothari, he reviews his portfolio on a monthly and yearly basis, checking for performance consistency and if there is a need to switch over to a different scheme. “It is also quite possible that at the end of the second year or third year a scheme might give you [returns],” he says, adding that it is also not advisable to jump to conclusions.

Advisors help build diversified portfolios based on goals like education, marriage or retirement. “For less than 10 years, I just recommend a debt fund SIP. For over 10 years, equity investing,” says Kothari. But the question remains, what if the market tanks when the investor needs the money as per his/her goal? When the goal is three to four years away, he also realigns the investor’s portfolio from long-term equity to short-term debt.

“If one switches four years before the goal to a short term (category), the investor is able to give more certainty to the portfolio. If an investor remains in equity even at the end of his goal then, because of volatility, the uncertainty is huge,” he says.

Because the fact remains that no one can time the market at the top or the bottom. As Nilesh Shah points out, “There is no way I could have sold all my equity at the beginning of January 2018 and bought everything in August 2019. It just doesn’t happen.” Investors should continue with disciplined investment, not becoming greedy when things are looking too good and not becoming extremely fearful when things are looking bad. “It’s not sexy, it’s not a smart way to say it, but that’s the reality we have accepted. That we are not in a position to predict the future, the only thing that has worked in asset allocation.”

Tweets by @forbesindia
How to avail tax benefits with a Health Insurance Policy
Feedback culture: When colleagues become competitors