With no recovery in sight and negotiations over another stimulus package at an impasse, United Airlines and American Airlines on Thursday began furloughing more than 32,000 workers 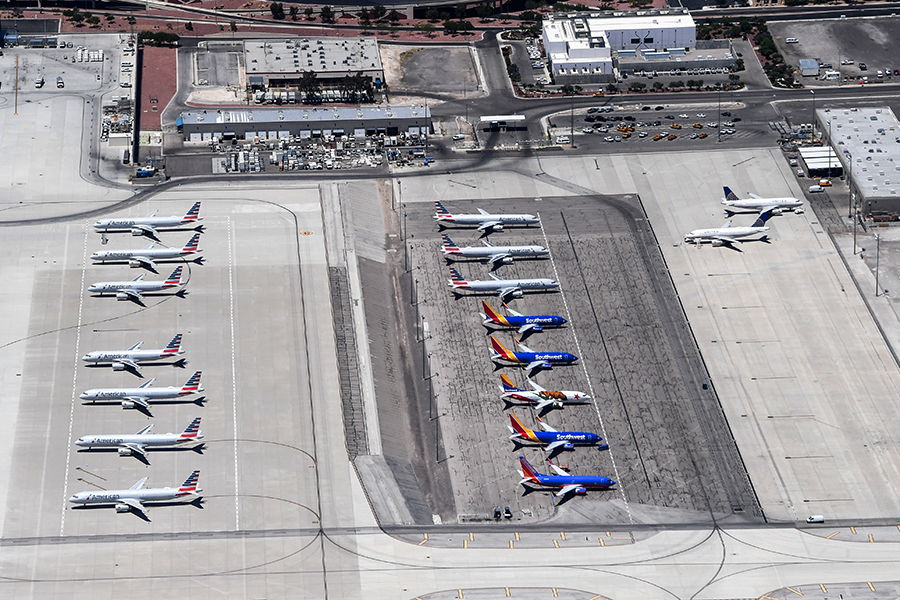 An aerial view shows American Airlines, Southwest Airlines and United Airlines jets parked at McCarran International Airport amid the spread of the coronavirus on May 21, 2020 in Las Vegas, Nevada. The nation's 10th busiest airport recorded a 53% decrease in arriving and departing passengers for March compared to the same month in 2019, a drop of more than 2.3 million travelers, as the COVID-19 pandemic impacts the travel industry.  (Photo by Ethan Miller/Getty Images)

When Congress gave passenger airlines a $50 billion bailout in March, industry executives hoped the aid would tide them over until the fall, when more people might be traveling and a vaccine might be closer at hand. Several months later, that hopeful future remains extremely murky. With no recovery in sight and negotiations over another stimulus package at an impasse, United Airlines and American Airlines on Thursday began furloughing more than 32,000 workers. The companies said they would reverse the cuts if Congress and the Trump administration reached an agreement to extend more aid to the industry, but there has been little or no progress in those talks. “I am extremely sorry we have reached this outcome,” Doug Parker, American’s chief executive, told employees in a letter late Wednesday. “It is not what you all deserve.” Airlines were prohibited by the March stimulus law from undertaking major cuts to where they fly and whom they employ until Oct. 1. For months, unions have lobbied lawmakers for more money to postpone the day of reckoning, arguing that airlines are crucial to the economy, and help support other major employers like airports, hotels, car rental agencies and restaurants. The campaign worked, but only to an extent. A bipartisan majority of lawmakers in the House of Representatives, at least 16 Republican senators and President Donald Trump said they would be willing to offer another lifeline to the industry. But the effort stalled as Congress and the administration remained deadlocked on a broader aid package. The Trump administration has for weeks been exploring ways to help the industry unilaterally, through executive actions or by repurposing unused money from the previous relief legislation. But officials have concluded that those options were not feasible. Treasury Secretary Steven Mnuchin has indicated that Congress would need to authorize the Treasury to redirect leftover funds, such as the money that was appropriated for backstopping Federal Reserve lending programs. Last week, John Grant, a senior analyst at OAG, an aviation data provider, said the outlook for the next few months is stark for major U.S. airlines because of fewer bookings and more travelers using vouchers for canceled reservations.

Tweets by @forbesindia
Photo of the Day: Death of the cruise
New York becomes the first big city to reopen all its schools