In a land conditioned by calamity, people knew what to do, including helping wounded people they didn't know 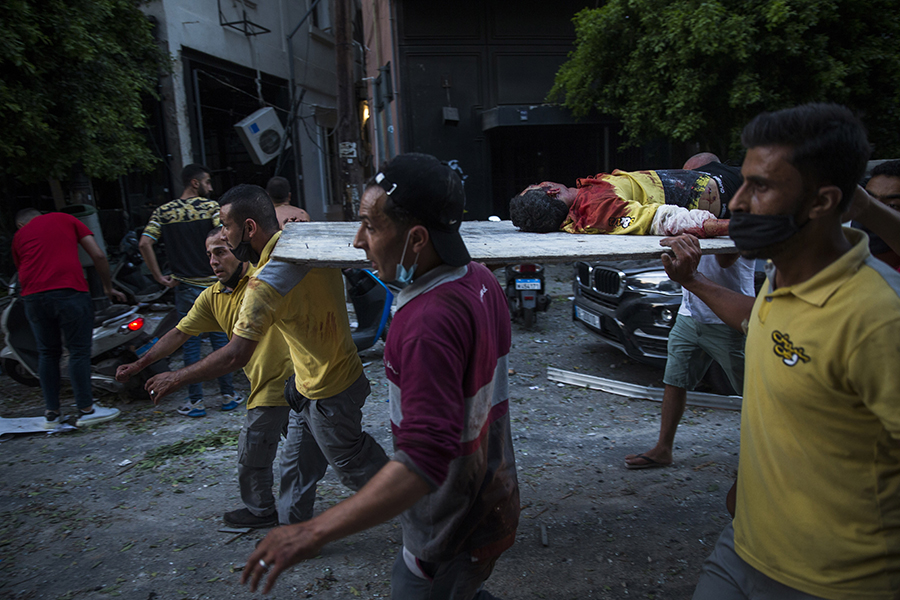 An injured man is carried on a piece of wood after a large explosion on August 4, 2020 in Beirut, Lebanon.Video shared on social media showed a structure fire near the port of Beirut followed by a second massive explosion, which damaged surrounding buildings and injured hundreds.

Image: Daniel Carde/Getty Images BEIRUT — I was just about to look at a video a friend had sent me Tuesday afternoon — “the port seems to be burning,” she said — when my whole building shook, as if startled, by the deepest boom I’d ever heard. Uneasily, naïvely, I ran to the window, then back to my desk to check for news. Then came a much bigger boom, and the sound itself seemed to splinter. There was shattered glass flying everywhere. Not thinking but moving, I ducked under my desk. When the world stopped cracking open, I couldn’t see at first because of the blood running down my face. After blinking the blood from my eyes, I tried to take in the sight of my apartment turned into a demolition site. My yellow front door had been hurled on top of my dining table. I couldn’t find my passport, or even any sturdy shoes. Later, someone would tell me that Beirutis of her generation, who had been raised during Lebanon’s 15-year civil war, instinctively ran into their hallways as soon as they heard the first blast, to escape the glass they knew would break. I was not so well-trained, but the Lebanese who would help me in the hours to come had the heartbreaking steadiness that comes from having lived through countless previous disasters. Nearly all of them were strangers, yet they treated me like a friend. When I got downstairs, dodging the enormous broken window that rested jaggedly in my stairwell, my neighborhood, with its graceful old-Beirut architecture and arched windows, looked like a picture from the wars I had seen from afar — a mouth missing all its teeth. Someone passing on a motorbike saw my bloody face and told me to hop on. When we couldn’t get any closer to the hospital, our way blocked by hillocks of broken glass and stranded cars, I got off and started walking. Everyone on the street seemed to be either bleeding from open gashes or swathed in makeshift bandages — all except one woman in a chic, backless top leading a small dog on a leash. Only an hour before, we had all been walking dogs or checking email or shopping for groceries. Only an hour before, there had been no blood. As I neared the hospital, elderly patients sat dazed in wheelchairs in the streets, still hooked to their IV bags. A woman lay on the ground in front of the exploded emergency room, her whole body dripping red, not moving much. It was clear that they weren’t taking new patients, certainly not any as comparatively lucky as I was. Someone named Youssef saw me, sat me down and started cleaning and bandaging my face. Once he was satisfied I could walk, he left and I started wandering, trying to think of another hospital I could try. I ran into a friend of a friend, someone I had met only a few times before, and he bandaged the rest of my wounds, disinfecting the lacerations with splashes of Lebanon’s national liquor, an anise-flavored drink called arak. His roommate swept up their terrace as I bloodied their towels. “I can’t think unless it’s clean,” he explained. Until then, I hadn’t had more than the vaguest guesses about what might have happened. Someone was reporting that fireworks had exploded at the port. Much later, Lebanese officials acknowledged that a large cache of explosive material seized by the government years ago was stored where the explosions occurred. Survivors walked by, moving faster than the jammed-up traffic. To anyone who appeared unhurt, people called out, “alhamdulillah al-salama,” or, roughly translated, thank God for your safety. Before the end of the night, after my co-workers had found me, after a passing driver named Ralph had offered to take us to one of the few hospitals still accepting patients, after a doctor had put 11 staples in my forehead and another sprinkling on my leg and arms, people would be saying the same thing to me: Thank God for your safety. “Thank you,” I said in reply, “truly thank you,” and I didn’t mean just for the good wishes.

Tweets by @forbesindia
Photo of the Day: Beirut rocked by 'apocalyptic' explosion
Ford, struggling in a changing industry, replaces its CEO