Jim Hackett, who failed to impress Wall Street, will be replaced by James Farley, an auto industry veteran who started his career at Toyota 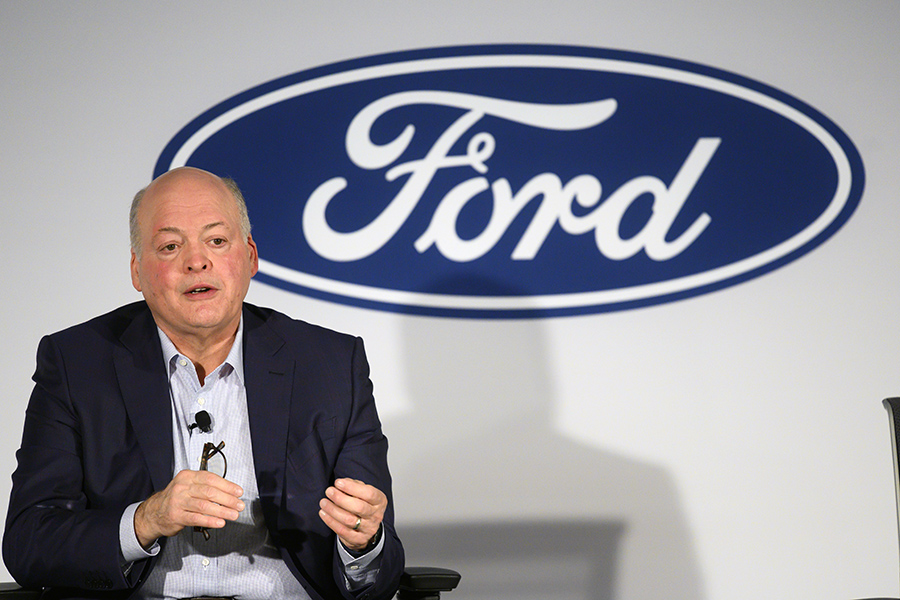 Jim Hackett, the chief executive of Ford Motor, speaks at a news conference in New York on July 12, 2019. Hackett is stepping down as chief executive after three years at the helm, the company anounced on Tuesday, Aug. 4, 2020
Image: Michael Noble Jr./The New York Times

Three years ago, Ford Motor brought in a new chief executive, Jim Hackett, to streamline the company’s inner workings and raise profits. Now, after he achieved mixed results, the company is again turning to a new boss, hoping he can accelerate the process and finish the job. On Tuesday, Ford said Hackett will retire Oct. 1 and will be succeeded by James D. Farley Jr., whose promotion to chief operating officer in February had fueled speculation that Hackett’s tenure was nearing an end. “I am very grateful to Jim Hackett for all he has done to modernize Ford and prepare us to compete and win in the future,” said William Clay Ford Jr., Ford’s executive chairman. The company, he added, is becoming “much more nimble.” Farley will take the titles of president and CEO, and join Ford’s board of directors, the company said. Hackett, a former chief executive of Steelcase, an office furniture manufacturer that is much smaller and less complex, was named to the top job at Ford in May 2017, as the company’s business was slumping under his predecessor, Mark Fields. Hackett promised to revitalize Ford’s operations and steer the company toward vehicles that would generate profits — pickup trucks and sport-utility vehicles — and invest in emerging technologies like electric and self-driving vehicles. The company is starting to introduce some of the models developed under Hackett, including a redesigned F-150 pickup truck and a new series of SUVs under its dormant Bronco brand. The Mustang Mach E, an electric SUV styled to resemble the storied sports car, has generated lots of buzz and is set to go into production later this year. “We have lots of work ahead of us to complete our mission, but thanks to Jim, we are a very different company today than we were three years ago,” Ford said in a conference call to discuss the leadership change. Hackett is credited with eliminating money-losing cars from Ford’s North American lineup in favor of more profitable pickups and SUVs. He formed alliances with Volkswagen, the Indian automaker Mahindra and Rivian, a startup working on electric trucks in which Ford has invested. Hackett also accelerated plans to develop electric vehicles. But so far, the turnaround has had little effect on the company’s bottom line and stock price. Ford’s profits fell in 2018 and 2019, dropping to $47 million last year. This year, the pandemic has hammered its business, and the company lost $876 million in the first half of the year. “Making the CEO change now could be viewed as Ford is ready to move faster, more aggressively,” Joseph Spak, an analyst with RBC Capital Markets, wrote in a note to clients. “Farley’s persona and style may be what is needed for that.” Wall Street analysts have criticized Hackett for stopping short of presenting a full turnaround plan with detailed financial goals and timetables. Ford had planned to do so early in his tenure but changed course and presented only broad targets and revealed its plans piecemeal as it rolled out specific initiatives and projects. Ford shares were trading at about $11 when Hackett arrived. The stock was trading at $6.85 Tuesday afternoon, up about 2%. Hackett “faced challenges in technology changes and current operations without technology or auto industry experience,” said Erik Gordon, a business professor at the University of Michigan who follows the auto industry. Investors value Ford at about $27 billion, just one-tenth the market capitalization of Tesla, the electric automaker that makes far fewer cars and has been around only since 2003. Farley, 58, joined Ford in 2007 from Toyota Motor, where he played a key role in launching the company’s Lexus luxury brand. Since arriving at Ford, he has held a variety of jobs, including running the company’s marketing, its European operations and a new business strategy group. Farley’s temperament is very different from Hackett’s. The current chief executive has a cerebral, grandfatherly presence and is known for writing long companywide emails about his thoughts on Ford and its future. Farley is known as an intense and animated personality. In a conference call, Farley noted the automaker has a history going back 117 years. Over more than a century, Ford has competed with and been closely compared to its two Detroit rivals, General Motors and the company now known as Fiat Chrysler. But given the technological changes and disruption now rippling through the auto industry, Farley said Ford’s competitors today include companies like Amazon, Tesla, Toyota and Baidu, a Chinese artificial-intelligence technology company that is working on self-driving cars. Farley said his first priority would be to ensure a smooth transition. He added that he is optimistic about the company’s prospects now that it has introduced the new F-150, Bronco SUV and the Mustang Mach E. Ford is hoping the Mustang Mach E will emerge as a serious challenger to Tesla, which has faced little serious competition. The company is also taking aim at Jeep, a Fiat Chrysler brand, with its new Bronco, for which it has taken 150,000 reservations. On Farley’s list of tasks are raising Ford’s profit margin in North America to 10% or more, cutting costs and reviving the company’s sales in Europe, China and South America. “I’m inspired by the momentum we are building,” Farley said in the conference call. “To fulfill our mission, we need to swing for the fences.”