China cashes in on the cannabis boom

Two of China's 34 regions are quietly leading a boom in cultivating cannabis to produce cannabidiol, even though it has not been authorised for consumption in China 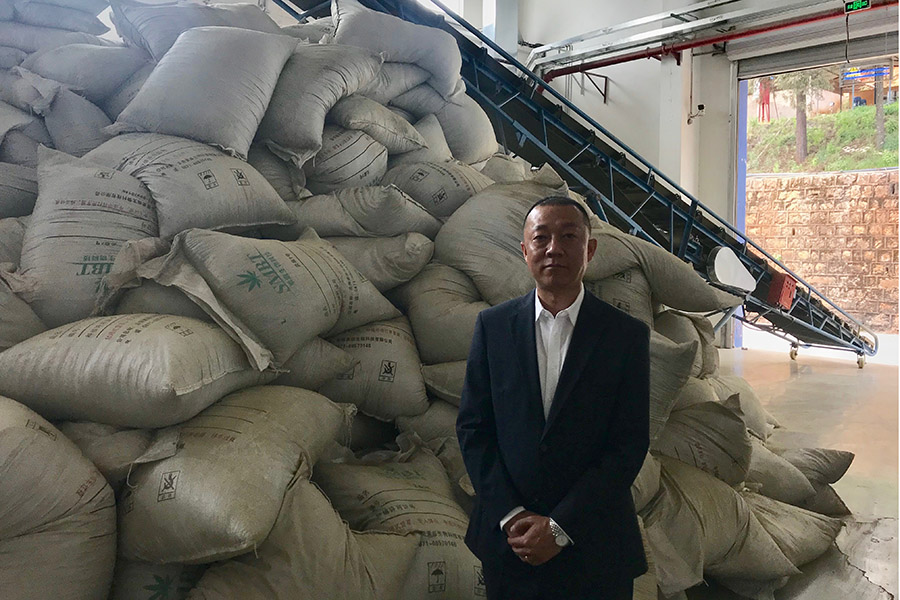 Tian Wei, the director of Hemp Soul, a factory in Shanchong, in the Yunnan Province of China, March 27, 2019. Legalization has little chance of coming to China, but companies have begun cultivating the plant to meet overseas demand for cannabidiol, or CBD.
Image: Steven Lee Myers/The New York Times

SHANCHONG, China — China has made your iPhone, your Nikes and, chances are, the lights on your Christmas tree. Now, it wants to grow your cannabis. Two of China’s 34 regions are quietly leading a boom in cultivating cannabis to produce cannabidiol, or CBD, the nonintoxicating compound that has become a consumer health and beauty craze in the United States and beyond.

They are doing so even though cannabidiol has not been authorized for consumption in China, a country with some of the strictest drug-enforcement policies in the world. “It has huge potential,” said Tan Xin, the chairman of Hanma Investment Group, which in 2017 became the first company to receive permission to extract cannabidiol here in southern China. The chemical is marketed abroad — in oils, sprays and balms as treatment for insomnia, acne and even diseases like diabetes and multiple sclerosis. (The science, so far, is not conclusive.) The movement to legalize the mind-altering kind of cannabis has virtually no chance of emerging in China. But the easing of the plant’s stigma in North America has generated global demand for medicinal products — especially for cannabidiol — that companies in China are rushing to fill. Hanma’s subsidiary in Shanchong, a village in a remote valley west of Kunming, the capital of Yunnan province, cultivates more than 1,600 acres of hemp, the variety of cannabis that is also used in rope, paper and fabrics. From the crop, it extracts cannabidiol in oil and crystal form at a gleaming factory it opened two years ago, in a restricted zone next to a weapons manufacturer. “It is very good for people’s health,” Tian Wei, general manager of the subsidiary, Hempsoul, said during an interview at the factory, which was punctuated by test gunfire from the manufacturer next door. “China may have become aware of this aspect a little bit late, but there will definitely be opportunities in the future,” Tian said. China has, in fact, cultivated cannabis for thousands of years — for textiles, for hemp seeds and oil and even, according to some, for traditional medicine. The Divine Farmer’s Classic of Materia Medica, a text from the first or second century, attributed curative powers to cannabis, its seeds and its leaves for a variety of ailments. “Prolonged consumption frees the spirit light and lightens the body,” it said, according to a translation cited in an article in the journal Frontiers in Pharmacology. The People’s Republic of China, after its founding in 1949, took a hard line on illegal drugs, and cultivating and using marijuana are strictly forbidden to this day, with traffickers facing the death penalty in extreme cases. After signing the United Nations Convention on Psychotropic Substances in 1985, China went even further. It banned all cultivation of hemp — which had long been grown in Yunnan, a mountainous province that borders Myanmar, Laos and Vietnam and is among China’s poorest. Farmers produced hemp to make rope and textiles and China had banned it even though it has only trace amounts of tetrahydrocannabinol, or THC, the mind-altering compound found in marijuana. At a news conference in Beijing last month, Liu Yuejin, deputy director of the National Narcotics Control Commission, said the momentum toward legalization in other countries meant Chinese authorities would “more strictly strengthen the supervision of industrial cannabis.” The Hempsoul factory has dozens of closed-circuit cameras that stream videos directly to the provincial public security bureau. China relented on industrial hemp only in 2010, allowing Yunnan to resume production. Hemp then was used principally for textiles, including the uniforms of the People’s Liberation Army, but soon the products expanded. 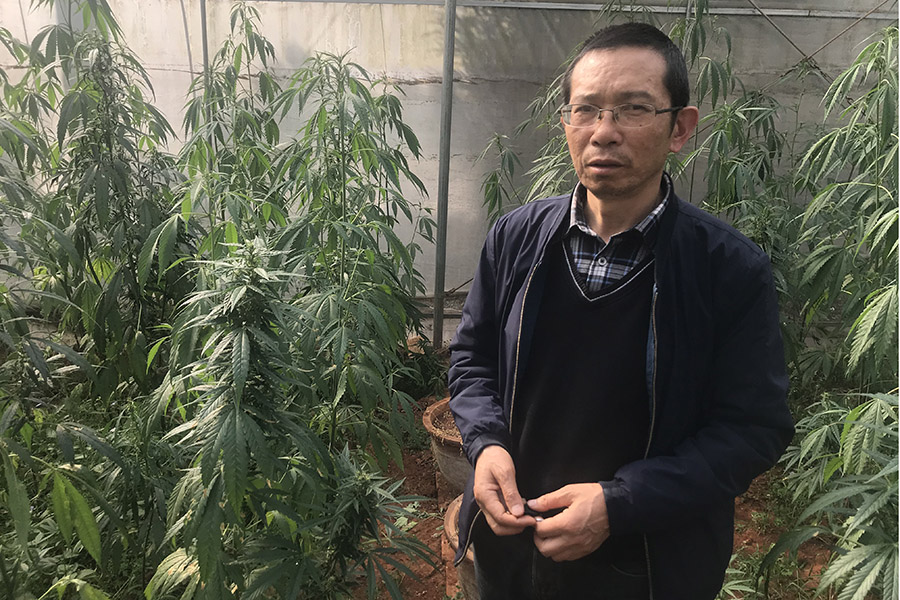 Yang Ming, one of China's leading advocates for the use of hemp for textiles, food and medicinal purposes, is a professor who leads the Department of Hemp at the Yunnan Academy of Agricultural Sciences in Kunming, China, March 27, 2019. Legalization has little chance of coming to China, but companies have begun cultivating the plant to meet overseas demand for cannabidiol, or CBD.
Image: Steven Lee Myers/The New York Times
The growing industry has brought much-needed investment to Yunnan. The mild, springlike climate is exemplary for growing cannabis, and a farmer can earn the equivalent of $300 an acre for it, more than for flax or rapeseed, Tian of Hempsoul said. Hempsoul is one of four companies in Yunnan that have received licenses to process hemp for cannabidiol, putting more than 36,000 acres under cultivation. Now others are joining the rush. In February, the province granted a license to three subsidiaries of Conba Group, a pharmaceutical company based in Zhejiang province. A company based in the city of Qingdao, Huaren Pharmaceutical, said recently it was applying for permission to grow hemp in greenhouses, which already line the landscape around Kunming. Other regions have taken notice, too. In 2017, Heilongjiang, a province along China’s northeastern border with Russia, joined Yunnan in allowing cannabis cultivation. Jilin, the province next door, said this year that it would also move to do so. The flurry of announcements sent the companies’ stocks soaring on Chinese exchanges, prompting regulators to step in to restrict trading. While the health benefits of cannabidiol remain uncertain, the U.S. Food and Drug Administration last year approved the first use of it as a drug to treat two rare and severe forms of epilepsy. Other potential uses are being studied. China permits the sale of hemp seeds and hemp oil and the use of CBD in cosmetics, but it has not yet approved cannabidiol for use in food and medicines. So, for now, the bulk of Hempsoul’s product — roughly two tons a year — is bound for markets overseas. Tian said he believed it was only a matter of time before China approved the compound for ingestion. Hanma’s ambitions are global. It has acquired an extraction plant in Las Vegas, which is expected to begin production soon, and it plans one in Canada. Tan, the chairman, said he hoped that China, with the world’s largest market, would follow the lead of the United States, which he called “the best-educated” market for the benefits of cannabis. “It’s a new application, but one that carries forward our tradition,” he said, citing the ancient texts describing its medicinal purposes. Yang Ming, a scientist with the Yunnan Academy of Agricultural Science who is one of China’s leading experts on hemp, said the plant’s seeds were traditionally formed into a ball and used to treat constipation, but the psychotropic qualities of cannabis were not broadly known by farmers or other residents. As China gradually opened up following the Cultural Revolution, however, foreign visitors to Yunnan in the late 1980s and early 1990s discovered an abundance of cannabis growing wild. That, in part, turned the region into a destination for backpackers and adventurers seeking a certain kind of experience. “They would go to the villagers’ cannabis fields, pick the buds and bring them back to the hotel to dry and smoke,” Yang said. “Some of them became deranged and ran around naked after smoking it.” That’s when authorities intervened. Yang, originally from Yunnan, was a recent graduate of the agricultural university in Beijing at the time. He was assigned to study cannabis, and he has been doing so ever since. His avatar on social media is a cannabis leaf. The academy has been breeding its own varieties of hemp — each of which requires approval from the police — to ensure the plant contains less than 0.3 percent of THC, the international standard for cannabis. There are nine varieties now, and Yang’s team continues to research more. One of the varieties, Yunnan Hemp No. 7, allows the extraction of greater amounts of cannabidiol. While the compound’s use in commercial products remains in its infancy, Yang has watched the stigma of its association with marijuana begin to evaporate. “Other countries,” he said, with pride of parenthood, “really like our CBD.”