Coronavirus: A boom time for the bean industry

Amid all the panic shopping, the growing demand for beans has stood out as an especially potent symbol of the anxious and uncertain times. To some suppliers, the sudden popularity of their once-unfashionable beans feels a little surreal 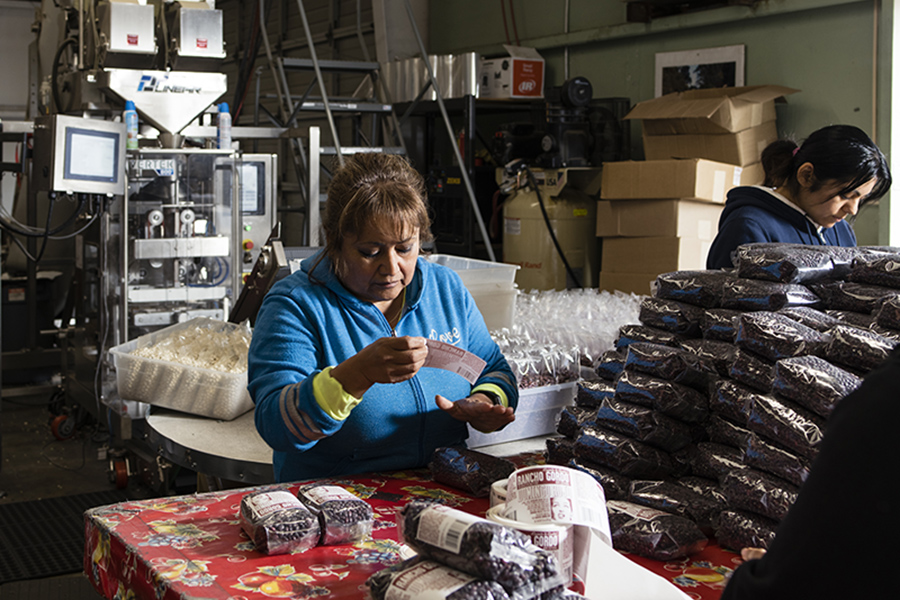 Workers label packages at Rancho Gordo, a suddenly-busy heirloom bean supplier in Napa, Calif., March 17, 2020. Amid all the coronavirus-driven panic shopping, the growing demand for beans has stood out as an especially potent symbol of the anxious and uncertain times. (Cayce Clifford/The New York Times)

Tim McGreevy has worked in the bean business for more than 30 years. But when he scanned the bean aisles at a grocery store in Pullman, Washington, on Sunday, he saw something he had never seen before: empty shelves.
“In one sense, this is like my best dream,” said McGreevy, who runs a trade group for producers and packagers of pulses, a category of legumes that includes beans. “In another sense, you go, ‘Wow, this is pretty serious.’” As the coronavirus pandemic upends daily life across the United States, Americans are filling their pantries with long-lasting essentials — pasta, rice, canned meat, even oat milk. But amid all the panic shopping, the growing demand for beans has stood out as an especially potent symbol of the anxious and uncertain times. At supermarkets, shoppers are stocking up on canned beans from familiar brands like Goya Foods, as well as thick bags of dry beans that usually lie largely untouched on store shelves. To some suppliers, the sudden popularity of their once-unfashionable beans feels a little surreal. “No one ever cares about beans at all,” said Steve Sando, who runs heirloom-bean supplier Rancho Gordo in the Napa Valley. “It’s just shocking. I used to be the loneliest man at the farmers market.” In recent weeks, the buying frenzy has extended to the entire pulses family, including lentils, dry peas and chickpeas as well as beans. Across the industry, canners and packagers have seen a 40% increase in sales, McGreevy said. At Goya, the increase has been even more dramatic: Sales of black beans, pinto beans and other canned products have spiked as much as 400%. In the past week, Goya has delivered 24 million cans to retailers. “I’ve seen earthquakes and hurricanes. This is the first time I’ve seen this,” said Bob Unanue, the company’s president. “This is a tsunami, this is a hurricane that’s not hitting one market. It’s hitting all markets.” Many canners and packagers are hiring staff or adding shifts to meet the surge in demand. Typically, Rancho Gordo receives 150 to 200 orders a day for its specialty beans. On March 14, the company received 1,669 orders. The next day, it recorded an additional 1,450. “We’re not set up for this at all,” Sando said. At his warehouse, Sando has instituted a night shift, hiring a handful of workers from a temporary agency to help out. He has told customers to expect delays as long as three or four weeks in fulfilling orders. Some mornings, he said, he wakes up to find that the company has already sold as many beans as it would normally sell in an entire day. “I’m taking no joy in this, to be honest,” Sando said. “It’s born out of fear. I mean, I love the sales. But food should be something you feel good about.” In many ways, pulses are the perfect food for a time of mass anxiety. They are cheap and nutritious. And some products can sit in a pantry for as long as two years. “They have found lentils in Egyptian tombs — and they’ve still sprouted,” McGreevy said. “Now, I’m not recommending you consume lentils from Egyptian times. But these are really shelf-stable foods.” For years, however, beans of all varieties have gotten a bad rap. Some people still associate them with the Great Depression. The food and agriculture branch of the United Nations warns that “many kids hate the ‘mushy’ texture.” And an entire children’s book has been devoted to the scourge of lima beans. But beans were beginning to grow more popular even before the coronavirus. Some environmentally conscious consumers are turning to beans as an alterative to meat, and home cooks have increasingly embraced them. After dipping in the early 2000s, the U.S. consumption of dry beans has risen in recent years, to 9.6 pounds in 2018 from 7.2 pounds per capita in 2015, according to government estimates. A few years ago, Sando started a “bean club” in which members could receive special bean shipments every three months for a subscription fee. It was meant to be a joke. “We’re in Napa, and I thought, ‘Oh, wine club — let’s do a bean club,’” he said. Now it has a waiting list of more than 8,000 names. On Twitter, bean aficionados have offered to help novice cooks figure out how to prepare the legumes, sharing recipes and tips. “There are a lot of new people who are kind of freaked out,” Sando said. “It’s pretty easy. You cook them till they’re done.” At the beginning of March, Luke Winkie, a freelance journalist in New York, bought a few bags of dry beans. It seemed like a sensible purchase. Only he had no idea what to do with them. So he did a little online research. “It’s like a two-day process,” he said. “It’s so far from the easy utilitarian thing I was expecting.” On Monday, Winkie, 28, cooked some dry white beans, which he had salvaged from a failed attempt the previous night to prepare a bean and chicken dish. “The beans were not good,” said Rebecca Jennings, a 27-year-old journalist and Winkie’s girlfriend. “No one just eats a bowl of beans.” Professional chefs have long appreciated beans for their versatility. They can go in soups and salads. They pair well with chicken, lamb and other meats. And they can be cooked intact or mashed together. “Drain them, mash them up, put olive oil in or butter, heat it up — it’s delicious,” said Georgeanne Brennan, author of the cookbook “French Beans.” “It’s kind of a learning opportunity now with these people who are hoarding the beans to have some pretty great new discoveries.” Still, some people whose “pandemic pantries” are overflowing with beans are not looking forward to actually eating them. Lupita Medina, an 18-year-old from Utah, was surprised to see her mother buy canned beans to prepare for the outbreak. “I don’t think I have ever had them,” Medina said. “Hard pass.”