As N Chandrasekaran takes over the reins of the Tata group on Tuesday, his immediate task will be to manage perceptions and mitigate business challenges, while identifying new areas of growth for the conglomerate 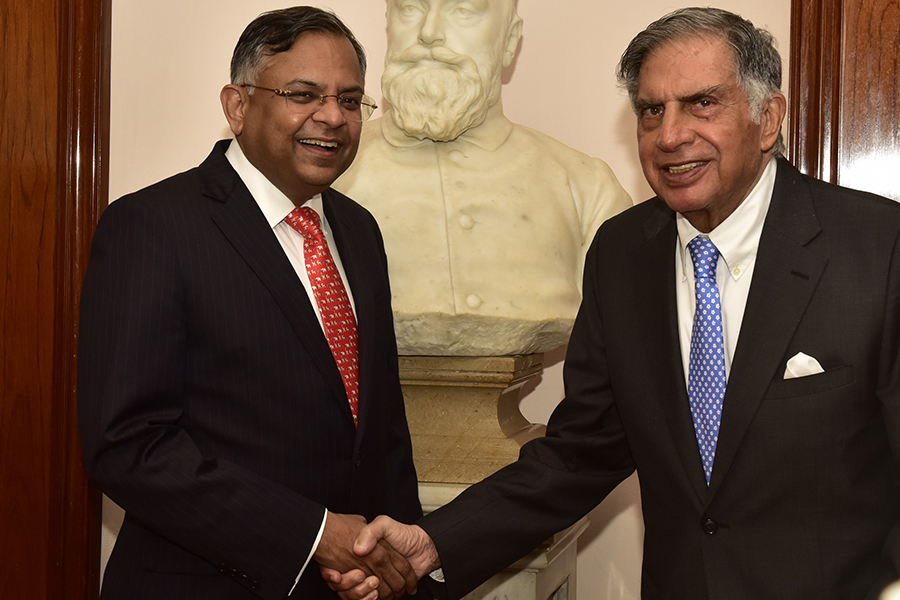 
Tata Sons, the flagship holding company of the $103 billion-Tata group, got its seventh chairman on Tuesday when group veteran N Chandrasekaran took over the top job at Bombay House, the conglomerate’s headquarters in South Mumbai.

Chandra, as he is popularly known within the business house as well as outside, chaired his first Tata Sons board meeting on Tuesday. “In my new role I will focus on three strategic priorities: bring the group closer to leverage its enormous collective strength; reinforce a leader’s mindset among the operating companies and drive world-class operating performances across the group; bring greater rigour to our capital allocation policies and deliver superior returns to our shareholders,” Chandra said in a statement issued by Tata Sons on Tuesday. “I look forward to working with my colleagues, the management teams and the Boards of the companies towards achieving these goals. It is an honour to lead the Tata group as we near our 150th anniversary. The Tata group occupies a unique place in the hearts and minds of millions of Indians and also has established an important presence around the world.”

Chandra, 53, was appointed to the top job at the holding company of the salt-to-software conglomerate following a pitched corporate battle between the directors of Tata Sons and trustees of Tata Trusts on one side, and the conglomerate’s former chairman Cyrus P Mistry on the other. A breakdown of ties owing to an irreconcilable trust deficit, and allegations of mismanagement and lax corporate governance hurled between the two sides ensued after Mistry was suddenly replaced as Tata Sons chairman on October 24, 2016.

Mistry’s predecessor and the present chairman of Tata Trusts, which owns 66 percent of Tata Sons, Ratan Tata came back to the holding company as interim chairman till a selection committee selected the business house’s new chairman. That happened on January 12, when Chandra, the managing director and chief executive officer of Tata Consultancy Services (TCS) was elevated to the corner office in Bombay House. Chandra had been leading TCS, the most valuable company within the Tata group and India’s largest IT services company, since 2009. He has spent his entire career at TCS starting 1987. Insider experience (including his understanding of the Tata values and ethos), credibility and a sound technological background were the key qualities that led to Chandra’s appointment as Tata Sons chairman, over a galaxy of leading industry executives that were considered for the role.

“I welcome Chandra, who has successfully displayed his leadership in his career at Tata Consultancy Services. I am sure he will bring considerable value to his leadership role in the Tata group in the years ahead. I wish Chandra every success for the future,” Ratan Tata said in the company statement. The septuagenarian goes back to being chairman emeritus of Tata Sons.

But the road ahead is unlikely to be easy for Chandra and there are many challenges that he will need to encounter and conquer. Here are the five key priorities that the new Tata Sons boss is likely to focus on during his first few days in office:

1. Dealing with Mistry’s legal challenge
Mistry, whose family is the single largest shareholder in Tata Sons with an 18.4 percent stake, has refused to ride into the sunset quietly and has challenged the actions of the Tata Trusts and Tata Sons legally. In a petition filed with the National Company Law Tribunal (NCLT) in Mumbai, the investment firms of the Shapoorji Pallonji Group, promoted by Mistry’s family, has alleged oppression of shareholders and mismanagement on account of several actions taken by the directors of the holding company and trustees of the Tata Trusts, including Ratan Tata himself. It is all but certain that whichever side loses the case at the NCLT will appeal the matter in a higher court. As chairman of Tata Sons, Chandra will have to get more involved than earlier with the conglomerate’s legal strategy in the battle against Mistry. He will also have to ensure that the noise around the imbroglio doesn’t distract the managements of the individual operating companies and employees from the task at hand of steering the group into the future.

2. Address business challenges
It has been known for a while now, and the message was amplified due to the Tata-Mistry spat that a number of Tata group companies are facing headwinds in their respective businesses. These primarily include Tata Steel’s European operations, Tata Motors’ passenger vehicles division and Indian Hotel Co. Ltd. While Mistry was trying to chalk out strategies to deal with many of these challenges, it remains to be seen whether Chandra takes those initiatives forward or chooses a different path to deal with some of these hurdles. For instance, Mistry was clearly in favour of divesting a large portion of Tata Steel Europe’s operations, especially in the UK, and announcements for the sale of some units of this business have even been made. But whether the process of divesting European steel assets will continue, or whether the group will commit additional resources to the business and look to revive the business, remains to be seen. At Tata Motors, plans are afoot to change the design language and brand positioning of the company and the cars it makes. Some of these efforts are even bearing fruits with a few of the carmaker’s recent launches being well-accepted in the market from a perception point of view. Chandra’s technological knowledge may help Tata Motors as the world of automobiles moves towards electric cars and self-driving vehicles.

3. Preparing the future roadmap
The strategic vision document for the conglomerate that Mistry had prepared has been junked by the board of Tata Sons for alleged lack of clarity on how different group operating companies will work collectively towards achieving the goals set out. Chandra will have to take some time to understand the nuances of the individual businesses and come up with a credible business plan of his own, that needs to be acceptable to the board.  One of the important elements of this plan, ironically, will be to reduce the business house’s dependence on TCS for dividend income. For long, TCS has been the cash-cow of the conglomerate due to its outperformance under Chandra’s leadership. The new Tata Sons chairman will need to figure out a way to increase the share of value that other businesses contribute to Tata Sons, such that external shocks to the IT business (which appear likely due to the Trump administration’s stated intentions in the US) doesn’t de-stabilise Tata Sons’ income stream. Tata Sons uses dividend income received from operating companies to invest in new and existing businesses as and when needed and also pay dividends to Tata Trusts, which channelize these funds for its philanthropic activities.

4. Managing perception
Due to the bruising battle with Mistry, the Tata Group’s perception as a beacon of corporate governance has been somewhat impacted. Chandra will have to lead a communications and outreach campaign to restore this lost sheen; and impress upon current and potential investors that nothing has changed at the conglomerate that has placed a premium on best governance practices and a humane and ethical approach to business over the 144 years of its existence. There is also concerns over TCS’ future after Chandra. After Chandra’s promotion, Rajesh Gopinathan, the software services firm’s erstwhile chief financial officer has been chosen to lead the company. While Gopinathan and other senior executives like V Ramakrishnan and NG Subramaniam are well-regarded in the industry and are thought of as capable leaders, Chandra will need to spend some time with TCS investors to emphasize to them and the company’s clients that nothing changes for them. Investors and clients will surely draw comfort from the fact that as the new chairman of TCS, Chandra will very much be around and aware of what is happening at TCS.

5. Putting an A-Team in place
After Mistry’s departure, the group executive council (GEC) that he had constituted to advise him on matters of strategic importance was also disbanded. Some of the former executives of the GEC like Madhu Kannan and Nirmalya Kumar left the conglomerate, while others like Mukund Rajan and Harish Bhat were re-assigned to other roles. Chandra will have to similarly handpick his lieutenants. He may look for a diverse set of professionals from within the conglomerate, who have a deep understand of different verticals in which the business house operates, especially manufacturing. Though as the chief of TCS, Chandra would have interacted with a number of clients from domains such as manufacturing and financial services, he doesn’t have firsthand experiences of having worked for such companies. He may seek the counsel of other group insiders who do, to develop a swift understanding of the intricacies of these businesses.