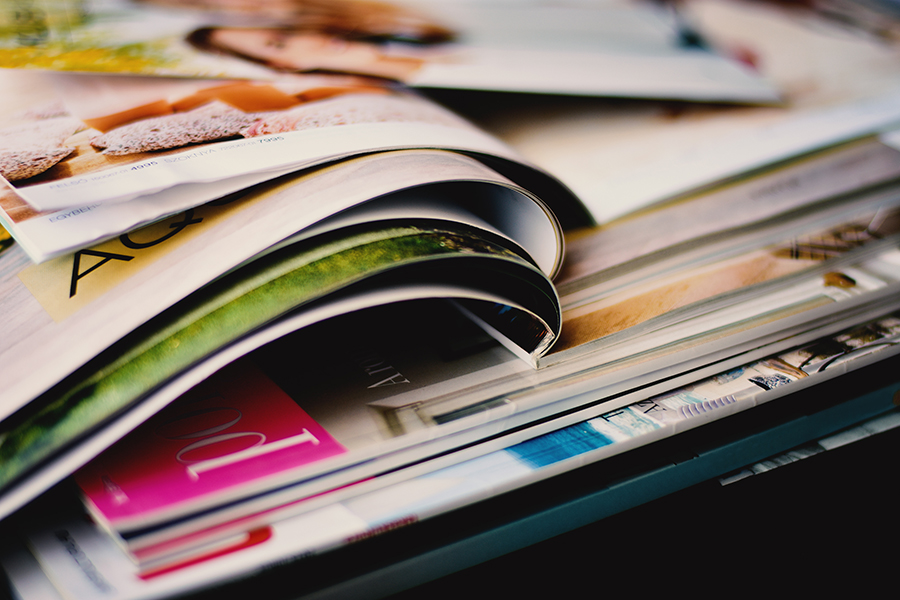 These findings are part of the global media management investment conglomerate Group M’s biannual advertising expenditure futures report ‘This Year Next Year’ (TYNY) 2017, which was released on February 14. 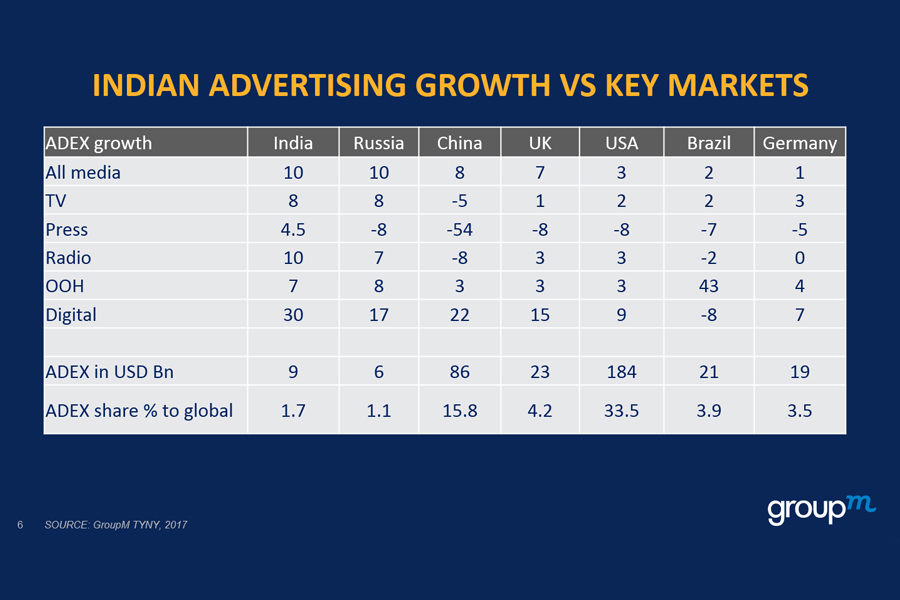 Source: Group M TYNY 2017 report
As indicated in the table, AdEx in print media has declined in key growth markets like Russia, China, UK, US, Brazil and Germany. The growth in ad spend in print media, which is also the second largest medium for advertising after television, in India will come from sectors like auto, BFSI  and e-wallets. Vernacular and regional newspapers will see a higher growth rate than their English counterparts.
The total advertising investment, across media, in India is projected to grow by 10 percent to reach Rs 61,204 crore in 2017 from Rs 55,671 crore in 2016. Global AdEx is expected to grow by 4.4 percent and Asia-Pacific will grow by 6.3 percent. This makes India one of the fastest growing ad markets globally. 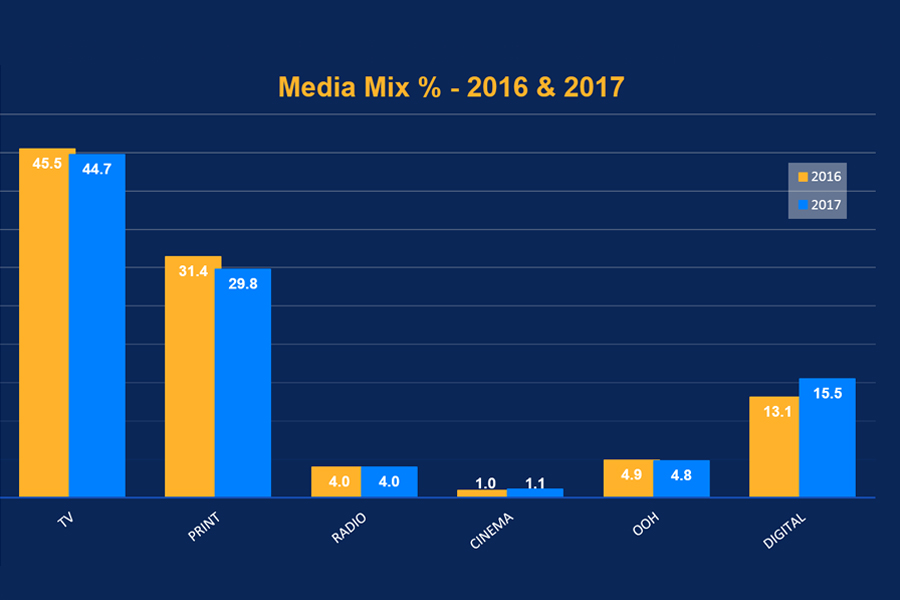 Source: Group M TYNY 2017 report
Despite beginning on an optimistic note, the overall AdEx in 2016 took a hit owing to lower-than-expected ad spend growth from sectors like FMCG, traditional retail, telecom and irregular spending in categories like ecommerce. Additionally, demonetisation in the last quarter had a negative impact of about 2 percent on the total AdEx in 2016.

“The first quarter will give a slow start to the year, with the market picking up from March-April, fuelled by a stable recovery process post demonetisation…In addition to auto, media and e-wallets, government and political parties will also increase spending with elections in several states this year,” says CVL Srinivas, CEO, GroupM South Asia. 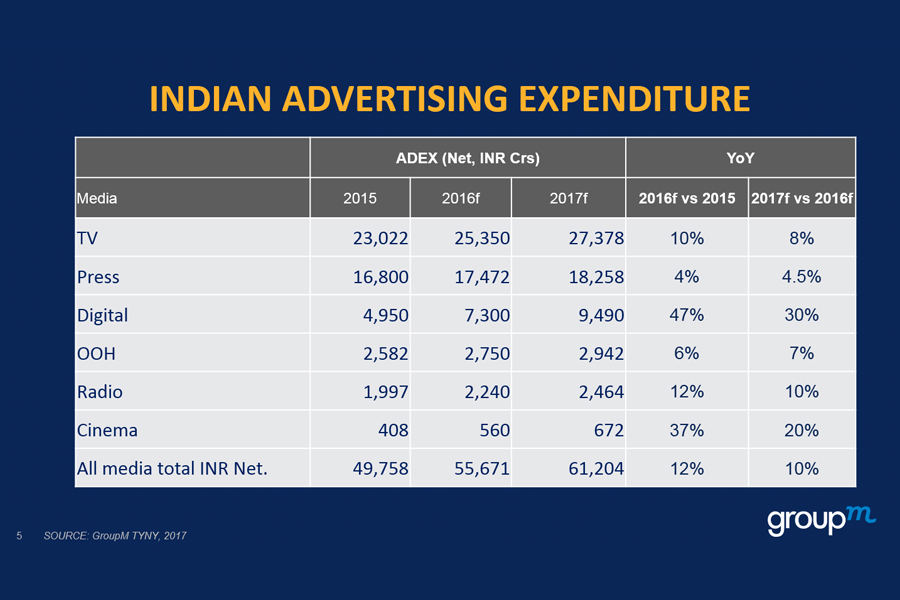 Source: Group M TYNY 2017 report
Digital AdEx, which grew by 47 percent in 2015-16, is expected to grow by 30 percent in 2017 to Rs 9,490 crore from Rs 7,300 crore in 2016. Globally, while digital accounts for 80 percent of the incremental ad spend, the growth is more evenly split between traditional and digital in India, with digital accounting for about 40 percent of the incremental ad spend growth. Digital AdEx is estimated to take a 15.5 percent share of the total AdEx this year.
Similarly, television enjoys a lion’s share of the AdEx pie with 45 percent, and is expected to grow by 8 percent to Rs 27,378 crore from Rs 25,350 in 2016. It grew by 10 percent in 2016 over 2015. The growth this year will be fuelled by Free To Air channels adding more inventory and pure HD content gaining ground. The market will also see consolidation of nice channels, states the report.

Further, radio is expected to grow at a little over 10 percent, while it grew by 12 percent in the previous year. The growth will come once the Phase 3 rollout is completed in 2017.

Cinema advertising will grow at a high double-digit rate of 20 percent on the back of consolidation which has led to investments in infrastructure and growing acceptance of premium Indian and Hollywood content by advertisers. The medium had grown by 37 percent in 2016.

In terms of sectors contributing to AdEx, the report finds that FMCG will contribute to 27 percent of the total ad spend. 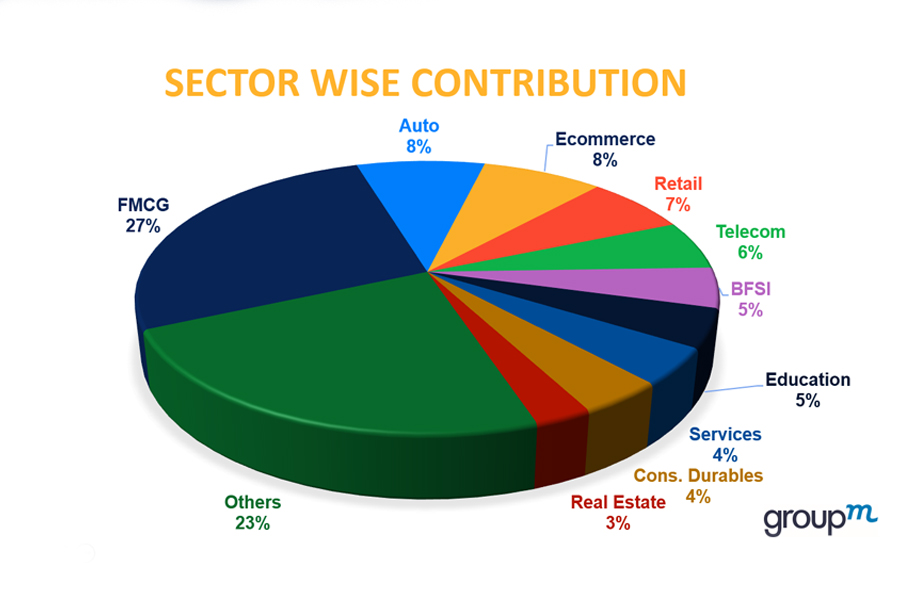 The report also states that the growth rate for Indian advertising is in line with the revised GDP forecast, which is estimated to be between 6.5 to 7.5 percent, led by low interest rates, sustained urban demand and the impact of key policy reforms. Over the last seven years, AdEx to GDP growth ratio has been between 1.5-2X, and 2017 will be no exception.
2017 will witness a high emphasis on ‘viewability’ metrics and outcome-based optimisation. Ad spends will also grow on OTT platforms, as internet speeds improve and catch up TV gains ground.