How Naiyya Saggi built BabyChakra into a mothers' social network 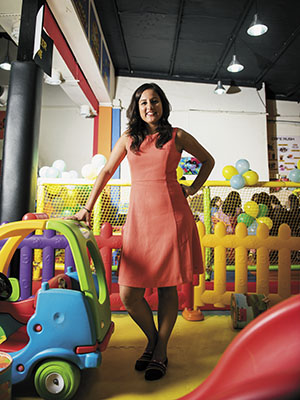 One thing a new mother is short on is time, and one thing she values is trust. These were the primary insights Naiyya Saggi decided to work with when she turned entrepreneur. Saggi, 32, had worked in the healthcare space at management consulting firm McKinsey & Company from 2007 to 2009 in Mumbai. Around the same time, she saw her friends struggle to find services and guidance during their pregnancy and post-delivery. And though she went on to graduate from Harvard Business School in 2010 (on two scholarships—the JN Tata Endowment and the Fulbright Scholar Program), the germ of an idea had already been sown.

It all finally came together in BabyChakra, a website she and her childhood friend Mitesh Karia launched in 2014. The website is a one-stop communication and ‘discovery platform’ for new mothers. “Fathers are also welcome, but we are currently focussed on pregnant women and mothers with children up to the age of five, as this is a period of maximum obsession and information asymmetry,” Saggi says with a smile as she sits back with a cup of coffee in a café in Mumbai’s Lower Parel. While 70 percent of Indians live in nuclear families and 85 percent of decisions are taken by mothers in these families, they have no one to turn to for advice, she adds.

While some startups—like mycity4kids, ZenParent, Parentune and IndiaParenting—do exist in the baby and child care industry, offering services ranging from reminders for vaccination to information about kids’ entertainment, BabyChakra’s basic premise is to create a community of mothers who can offer each other advice, recommendations and support. “Unlike other platforms, we are building an ecosystem of care for mothers,” Saggi says explaining that once a mother is on BabyChakra, she is plugged into a personal platform where she can connect with other mothers, experts and care providers best suited for her.

“The size of the baby care industry in India as of 2015, both online and offline put together, is $15-17 billion [around Rs 1 lakh crore]. This is expected to exceed $20-22 billion by the end of 2017,” says Aditya Pathak, business analyst at Bengaluru-based research and advisory firm RedSeer Consulting.

And Saggi believes there is a massive opportunity to disrupt this market, which, although fragmented and disaggregated, is growing at a compounded annual growth rate of 15-20 percent. BabyChakra itself has been growing steadily. Since its launch, the website has seen nearly 3 million mothers use its services and it has built a community of over 3,000 mothers, which is growing 10 percent month-on-month. The user base is also growing at 40 percent month-on-month.

BabyChakra has a 35-member team that works out of an office in Kala Ghoda in Mumbai and plans to increase staff strength to 55-60 by the end of this year when it shifts to its new office in the Kurla suburb.

The startup raised funds from Mumbai Angels, Singapore Angel Network and the Patni Family Office in 2015. (While Saggi declined to disclose the funding amount, media reports peg it at $600,000. The startup did not share revenue numbers).

“It was 30 percent the space and 70 percent Naiyya [Saggi] the entrepreneur that brought the Patni Family Office to the investment,” says Arihant Patni, managing director of Patni Financial Advisors. “I met her at the Wharton India Economic Forum in Philadelphia where she was presenting.”

“The market wasn’t crowded, but it was occupied when Naiyya entered,” adds Karan Maheshwari, managing director of Maheshwari Investors Private Limited and had previously worked with Saggi at McKinsey. “But we are a country of 1.2 billion people and even today you have people starting companies in power and fashion. One just needs to focus on one’s offering, product and business.” Maheshwari, who was the deal lead for Mumbai Angels when it invested in BabyChakra, adds, “I invested in BabyChakra because it is a wide open space and has a clear target market and need.”

Prior to the launch, Saggi and Karia spoke to over 1,200 mothers to understand the missing gaps in the maternity and child care space and what services they could recommend to make child care easier—like advice in choosing the right maternity hospital or finding a good daycare. “We launched the alpha and early beta [versions of the website] in January 2015 with the services that came in being only mom-recommended. For us, it’s about solving a real problem and making an impact,” Saggi says.

Users can sign in with their social media profiles—Facebook or Google—on the website and app for free to start using the service. There is also a closed community called the MomStar programme that actively contributes articles, writes reviews of products and services related to maternity and child care, organises meets and answers queries raised by other parents. In addition, the platform has a panel of 20 experts including paediatricians, baby weaning specialists, prenatal and lactation consultants and special needs educators. “Our experts contribute articles, respond to questions on the app and engage in Live Chats on the website and app, all for free,” says Saggi.

“A lot of mothers are struggling to change or choose doctors, some like me never knew we have lactation consultants and that there’s something called a developmental paediatrician as well. A lot of information about our options is present on the site,” says Prisha Lalwani, 31, who is a part of MomStar.

“Now, before visiting a new restaurant with my kid, I ensure I read its review on BabyChakra to know how child-friendly it is. The same goes with visiting a new doctor or a hospital,” adds Charu Sareen Gujjal, 28, a teacher. All the services provided on the site, from child specialists to playschools, are put through a set of verifications by BabyChakra before being listed. Mothers, too, write reviews based on their experience.

The challenge now, Pathak points out, is “to scale up, start focusing on the rural areas, be available in more languages and test the revenue model”. Maheshwari, too, adds that it needs to start experimenting with revenue models a year from now.

That, Saggi is already working on. “I believe in making money,” she says. The website has no banner ads, but brands like BabyOye, Cloud 9, LifeCell, Hamleys and MamyPoko Pants engage with the users through contextual marketing, i.e., sponsored posts and targeted advertising. “But we highlight such content and make it clear that it is paid for,” she clarifies.

And while it is well capitalised for the next two years, BabyChakra has also begun exploring other revenue streams.

It has onboarded services like party stores, bakeries, doctors, play areas, maid agencies and diagnostic centres in Mumbai, Delhi and Bengaluru. “It is essentially productising these services and enabling people to buy them through BabyChakra,” says Saggi. Since these services are hyperlocal in nature, they have a better reach on BabyChakra compared to generic Facebook Pages, claims Saggi who also plans to enable users to do online chats with these services. In the next three months, the startup is looking to bring on board over 10,000 more services across Mumbai and the adjoining areas of Navi Mumbai and Thane and then move on to Delhi and Bengaluru before gradually expanding to more cities. The startup plans to charge a commission on each transaction made.

“The idea is to facilitate helpful conversations between parents, especially mothers, experts, service providers and even larger brands, in a way that creates value for all stakeholders,” says Mohit Kumar, 24, chief product officer, BabyChakra.

Brands too seem happy with the results. “Working with BabyChakra allows us to access discerning mothers who are both knowledgeable and want to understand the difference between products available in X, Y, and Z places… brands like us and brands like BabyChakra are a refreshing way of building the category,” says Prakash Wakankar, CEO, Mahindra Retail.

When it comes to her own marketing, Saggi is a tad conservative, as she feels BabyChakra is “a very strong referral-based product that speaks for itself”. Most of the marketing activity is digital and done in-house. Instead, BabyChakra invests in offline events, the most recent being ‘Breast is Best’, held in August in Mumbai, where mothers were invited to share their stories. One of them shared a story about donating milk to another mother and that sparked off a new idea for Saggi. “It got us obsessed as a team, of how we could create that network, where donor mothers can register and mothers in need can contact them.”

Another idea playing out in Saggi’s mind is in the nanny space. There are a lot of Facebook pages or WhatsApp groups that share photographs like ‘this nanny ill-treated my child and stole my money’ or ‘she is good and I can vouch for her’. Saggi is considering building a user-generated database that shares information about nannies. “Ultimately, it is all about making lives easier for mothers,” she says.

(This story appears in the 14 October, 2016 issue of Forbes India. To visit our Archives, click here.)

Tweets by @forbesindia
Make a great first impression with these stylish business card holders
Poll: What are the current big concerns of Indian CEOs?