WittyFeed has claimed the second spot in producing global viral internet-based content, while operating out of an office in Indore 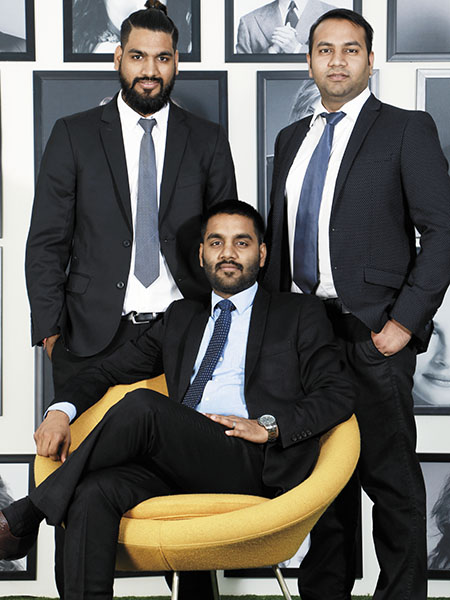 From left: WittyFeed’s Parveen Singhal, his brother Vinay and classmate Shashank Vaishnav
In late 2013, Vinay Singhal, his younger brother Parveen and classmate Shashank Vaishnav from Chennai’s SRM College were unsure about their future. The three computer engineers had moved to Indore, Vaishnav’s hometown, a year ago, but failure was looming in the form of two unsuccessful ventures. One was a website called Evrystry.com, which had curated content from across the internet; it was started after the success of their Facebook page called Amazing Things in the World, which they started in 2012 (it got 4.3 million followers in a year, and has 5.7 million till now). The second venture was a student-teacher communication platform called FollowMe247.

When both startups, despite their brief success, found it difficult to scale, the co-founders resolved to stick together and make things work. “We had been in this situation before and had gone our separate ways. But not this time,” says Vinay, 27, for whom “building solutions” was a passion. He was barely in his first year in college when, along with five classmates (including Vaishnav) and his school computer teacher, he started a company called Vatsana Technologies, which helped companies build their websites. However, balancing studies and clients proved to be difficult, and the team slowly disintegrated. It was then that, along with Parveen, who had joined their college, Vinay set up the Facebook page.

“We decided to shelve both the ventures [Evrystry and FollowMe 247], and instead develop a product in the content space that was stronger and better than Evrystry.com, which was giving us money to survive, as compared to FollowMe247 that was difficult to monetise,” says Vinay.

The idea was to develop a platform that provides value to all three stakeholders—content creators, distributors and consumers. This led to the launch of WittyFeed in September 2014, which, Vinay claims, is the world’s second largest content platform today, after BuzzFeed, based on viewer traffic numbers.

WittyFeed operates out of a 10,000 square feet office in Indore, where 55 in-house writers, along with a video and graphics team, create 80 percent of the content; the rest is generated by freelancers. The visual-heavy content on current or trendy topics—fashion, health and lifestyle, entertainment, sports and films—is in the form of charticles, listicles and videos; more than a hundred articles are added every day. This July, it ventured into producing video content, starting with a web series called Little Hearts—Uncover the Love Story.

The company was completely bootstrapped till this September when it raised an undisclosed amount of funding in a pre-series A round, led by investors Anand Chandrasekaran (former chief product officer at Snapdeal and Bharti Airtel), Apurva Chamaria (vice president and head of corporate marketing at HCL Technologies), Ritesh Malik (co-founder of Innov8) and others.

WittyFeed differentiates itself from the multitude of content platforms with the use of robust technology and analytics that help its content go viral—get at least 50,000 views—by directing content selection and creation, distribution and monetisation. It ranks 420 in the world and 45 in India, according to Alexa, an Amazon subsidiary that provides analytical insights on websites. In comparison, WittyFeed’s closest Indian competitor, ScoopWhoop, ranks 5,365 globally and 458 in India. “According to comScore, we are the third-most visited website in the entertainment category in India. The top two are YouTube and Hotstar,” says Vinay, co-founder and CEO.

“WittyFeed is servicing a consumer need for entertainment. And the fact that it has been able to do this without raising any money is commendable. It has probably created far more value than similar well-funded media properties, who have nothing great to show for the capital they have raised,” says Anand Lunia, founder, India Quotient, an early-stage investment firm.

WittyFeed is available in Spain, the US, and the UK, while in India it is one of the fastest growing content platforms, says an industry expert on condition of anonymity, next only to BuzzFeed; it clocks more than 100 million sessions (which includes page views, social interactions and ecommerce transactions) and 60 million unique visitors a month, and has generated revenues of ₹30 crore in FY17. This year, the target is ₹50 crore.

“We broke even within the first six months and have been profitable since then,” says Vinay, who hails from a village in Haryana, and credits his father, who runs a grocery store, for teaching him the basics of business. “The business has to make money on day one. And that doesn’t change no matter what the business is.”

“WittyFeed is a content platform for the world, but a technology play for us,” he adds. Technology decides which keywords should be used in the content on which day of the week so that it attracts viewers. “We also have capabilities to tell you how many words should be there in a title or a copy to get maximum shares, or maximum readership.” Vaishnav, 27, chief technology officer, tells Forbes India that this technology is backed by real-time data analysis. “User behaviour is tracked, analysed, measured and predicted… Our technology empowers thousands of influencers to share and spread relevant content to millions of people around the world.”

WittyFeed’s second strength is its strong network of influencers, which Vinay believes has “put us a few years ahead of competitors”. “If you were to launch a newspaper, how do you become the largest and most successful newspaper in the country? You basically require a very good distribution system. In the digital world, the influencers are the distributors. So we created a platform called Viral9.com for them [in 2014, along with launching WittyFeed],” he says.

Influencers are people with a few million followers on their digital platforms. They can pick any story that is relevant to their followers and redirect them to WittyFeed, thereby increasing traffic. Viral9 has about 15,000 influencers, and their average pay is about $40 per month, depending on their number of followers.

Based on data from Google analytics, WittyFeed claims that every third American visited WittyFeed at least three times in the last year, every second UK citizen came to the site WittyFeed twice, and every Indian internet user has seen it once. Most of the traffic comes via Facebook, which could perhaps prove to be a challenge given the platform’s constantly changing algorithms to ensure that users do not get spammed with irrelevant content; this could mean that WittyFeed might have to pay for its posts on Facebook in future, or look at alternative sources of traffic to its website. Vinay, however, says Facebook loves creators of good content and “the only thing we need to remember is that it shouldn’t be click-bait”.

WittyFeed makes money from programmatic advertising, which is “the most transparent and democratic form of earning ad revenue”, according to its founders. Since this April, it has also started working with brands for sponsored content and has tied up with around 70 brands, including Skoda, Uber, Tinder, Maruti, Coca-Cola, Reliance Jio [Reliance Industries owns Network 18, the publishers of Forbes India] and Zee Studios. It also worked with films, such as Toilet: Ek Prem Katha, for which actor Akshay Kumar shot a promotional video that received 3.5 million views on Facebook and YouTube, and was the digital partner for Baahubali 2: The Conclusion.

Vikas Singh, AVP brand marketing, Dainik Bhaskar, says he first heard of WittyFeed at a digital conference where people were discussing this new agency from Indore doing “fantastic stuff”. “Unlike many other digital agencies, the team at WittyFeed is focussed on driving engagement through interesting content. We engaged with it for our Punjab election campaign. We got 1.6 million views for our television ad of ‘Jeeto 15 crore’ on Facebook, besides driving huge engagement with the audience. This was possible only because of the interesting content it could curate and drive,” he says.

To track the impact of content more effectively, the founders are developing a dashboard where brands can log in, give a brief, select the bloggers and publishers they want to work with, approve content and view the results in real time. “By the end of this year, we want 40 percent of our revenues to come from brands,” says Vinay.

“There should be a balance between long-form content and scripted advertising pieces. And that is the space these people are cracking,” says Lunia.

The founders are also focusing on tying up with mobile apps to integrate their content and increase the volume of video content on their site. Parveen, its 24-year-old chief content officer, says video content would lead the next phase of growth in WittyFeed as consumption behaviour and habits change rapidly. It might also look for a series A funding round as it expands in more markets.

But while the going seems good for now, the founders are aware that this success isn’t permanent. “Today people consume content on the internet. Tomorrow it might change. And I want to be at the forefront of that change,” says Vinay.