Zippr: In the right direction

With a portable address code and Digital Door Number, the Hyderabad-based startup aims to standardise the variable address format in India 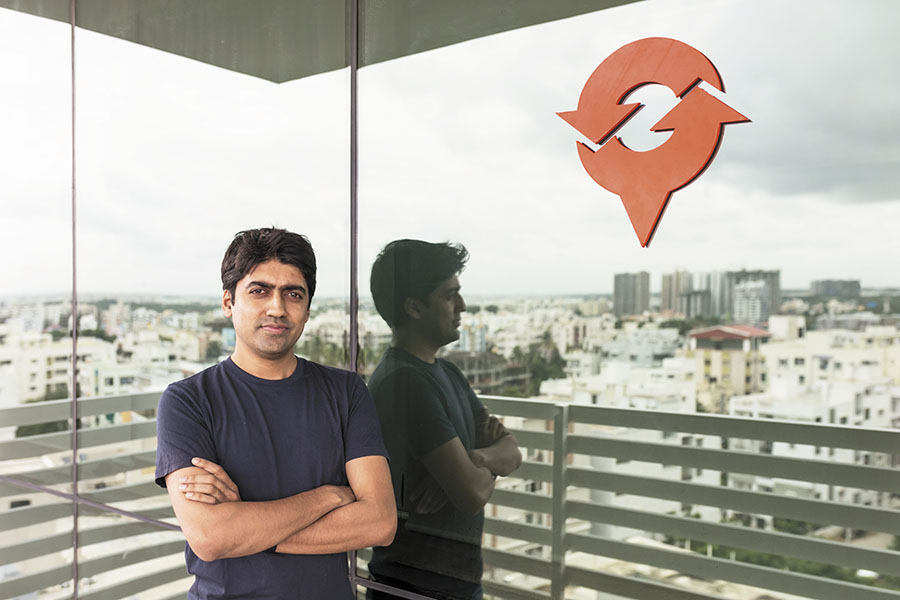 “Come till the flyover and I’ll guide you after that.”
“My building is three blocks away from the tower on your left.”
“Take the first right and third left after the signal.”

Sounds familiar? It would. After all, despite a four-line address, hardly any destination in India is reached without a phone call or two. This is a real pain point that Hyderabad-based Aditya Vuchi is trying to, well, address with his company Zippr.

“The idea came from personal experience,” says Vuchi, 36, sitting in his two-floor office in a corporate park in Hyderabad. “I saw a stark contrast between reaching a given address in the US, where I lived from 2002 to 2008, and in India. Here, if I have to leave for the airport at 4.30 am, the cab driver will begin calling me from 3.30 am for directions. I felt there has to be a better way of doing this.”

He began working on the idea in 2013, and by the end of that year, Zippr was launched as a free-to-use platform. It simplifies navigation to a destination using a smart address format—an eight-character alphanumerical code. Once created, the code can be easily shared. It has to be entered on the app or on Google to get the full address and navigation support. “It is an instant address that can be customised and is portable, i.e. even if a person changes homes, the same code can be used,” says Vuchi.
Success, however, wasn’t instant.

With just a few hundred downloads till 2014, the number of customers wasn’t large enough to encourage businesses to add this on their checkout page. The alternative was to first get businesses to adopt the technology, thereby prompting customers to create a Zippr code. This led to tie-ups with companies like Domino’s and GVK EMRI (Emergency Management and Research Institute), which operates the 108 ambulance in 18 Indian states, of which Zippr has integrated in three—Andhra Pradesh (AP), Karnataka and Telangana.

Domino’s began using Zippr two years ago to introduce map- and code-based store locators. “We use geo-location address detection solutions to enhance consumer experience and have partnered with many solutions providers, Zippr being one of them,” says a company spokesperson.

Vuchi and his 45-member team spoke to bureaucrats to understand the challenges in ‘addressing’. “We realised that it is a municipality or city level subject. So each city has its own format—for Delhi it is roads, Noida sectors, Hyderabad sub-localities and localities. We felt we could bring a lot of standardisation to it,” he tells Forbes India. 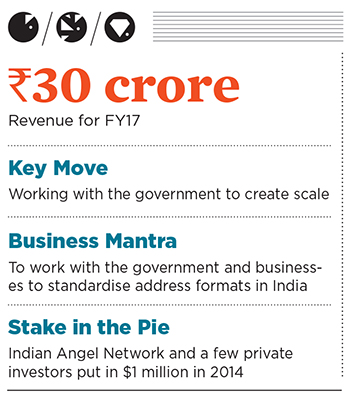 This resulted in Zippr developing a new product specifically for governments, called Digital Door Number (DDN). These codes are a combination of the area and street you are on, and the house number. In 2016, the AP government became the first state government to start using Zippr for geotagging each household.

Zippr today has around 2 million customers, 50 business clients, and has given a DDN to 17 million homes in AP. “In Vijayawada, which has 4 lakh homes, Zippr code is already a part of property tax and electricity bills,” says Vuchi. Efforts are now on to build an ecosystem where one can get medical services and cab services at home by SMSing the code without the need for smartphones or GPS. Talks with other state governments are in “different stages of procurement”.

While Zippr is free for individual customers, the revenue—$4.3 million (around ₹30 crore), according to intelligence platform Owler—comes in from businesses and the government.

THE PERSON BEHIND IT
Though Zippr was started in 2013, “the need to catalogue things was a habit since childhood,” says Vuchi, who had a folder in his computer with 20-30 business ideas, including Zippr, since his mechanical engineering days at Hyderabad’s CBIT College. He then went to the US in 2002 to pursue his master’s from West Virginia University, and joined Tribal Fusion, an advertising agency, as sales coordinator. “After six years in engineering, I knew this is not something that I wanted to pursue,” laughs Vuchi, who later quit Tribal Fusion in 2010 to “start something on my own”.

After briefly dabbling with a food catering business, he founded Media Mint in 2010. The company—an online advertising agency he runs along with Zippr—has 400 employees who serve 40 clients through their offices in the US, Europe and Hyderabad. “It is bootstrapped and profitable, and has been growing its revenue 80 percent year-on-year,” he says.

WHY IT IS A GEM
Zippr ties in with the government’s push for a digital India. “Only 4 percent of Indian streets have names... What we are telling the government is wherever you don’t have street names, you can use these codes,” says Vuchi.

While square kilometres are defined for a PIN code, local municipalities have no control over mutation of a land because of the density of population and the way construction happens, says Sanjay Mehta, investor with the Indian Angel Network, which invested $1 million in Zippr in 2014. “Zippr is solving this basic infrastructure problem, and has a huge market and monetisable opportunity,” he adds.

Zippr’s technology is fully automated, wherein it takes the road network and satellite imagery of the city and builds the encoding system, so that, “regardless of the kind of property mutations that happen, our numbering is consistent,” says Vuchi.

RISKS AND CHALLENGES
An unexpected challenge for Zippr has been an allegation from a Pune-based entrepreneur who claims “breach of confidentiality against us and our investors”. Besides, the arrival of a slew of location-based apps has reduced the scope of what Zippr could do three years ago.

That apart, understanding the symbiotic demand-supply dynamics of Zippr’s business model is a key challenge.

Perhaps the reason why a few other competitors couldn’t scale. “Building this ecosystem of addresses, consumers and businesses has been a challenge,” admits Vuchi. Nevertheless, he has his eyes firmly on the goal to make Zippr a part of the core infrastructure of the state.

Tweets by @forbesindia
The succession dilemma: Founder's privilege but whose curse?
The luxury of time: The latest in high-end timekeepers