The succession dilemma: Founder's privilege but whose curse?

The two organisations in the midst of a succession crisis together represent the entire spectrum of corporate India, and are a testimony to strong traditions and strategic resilience that characterise the enduring dominance of similar groups. 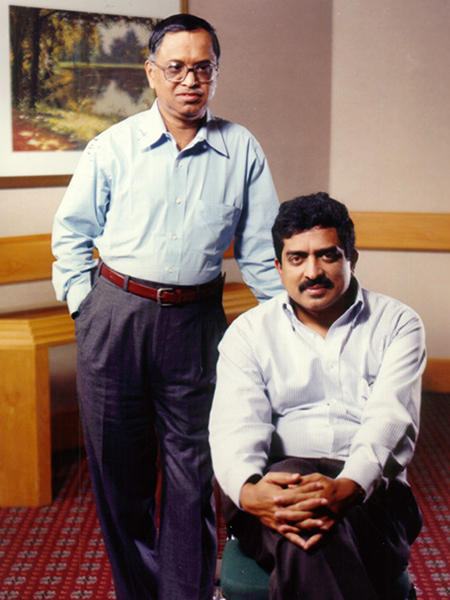 Infosys co-founders NR Narayana Murthy and Nandan Nilekani
The recent dramatic turn of events at Infosys – coming so soon after similar headline-grabbing events in the Tata group – is nothing short of an intrigue for the astute observers of corporate India. It is all the more disconcerting that the two organisations who happen to be the center of this succession crisis together represent the entire spectrum of corporate India.

One is a business house that is more than a century old and a testimony to both, the strong traditions and the strategic resilience that characterise the enduring dominance of similar groups. The other is the torch bearer of the contemporary entrepreneurial spirit and the ‘can do’ attitude that characterises the emerging middle class professional-turned entrepreneur. Both are highly respected organisations, and have undoubtedly been associated with the highest standards of ethics and integrity by their stakeholders.

The transition in the case of Tatas was from an inheritor to a successor, whereas in the case of Infosys, it was from a founder to the professional chief executive from outside the promoter’s group. If even these highly-admired organisations and leaders could not escape the convulsions accompanying a leadership transition, it calls for a deeper understanding of the challenges involved in effecting such a transition.

For the purpose of this discussion, let us refer to both the founder and inheritor as the leader. The biggest challenge for the leader is to let go. Driven by their passion, energy, drive and ambition, the leaders  end up being central to the organisation they build and grow. The more successful they are, the more this centrality gets entrenched. They also tend to shape the organisation processes and decision-making structures – perhaps inadvertently - in a way that this centrality gets strongly embedded.

This centrality of the leader has two attendant consequences. One is the enormous concentration of power and control in the hands of the leader. The other is that the organisation becomes an inalienable identity of the leader. All these attributes – centrality, power, control and identity - are mutually reinforcing and more often than not turn out to be the virtues that adorne the leader as long as the leader is in charge. But these very same virtues can come back and haunt them post succession.

When a succession happens, the leaders lose their defining attributes to the successor. This sense of loss triggers a response from an often unprepared leader and manifests itself into certain behaviors, which may not always be beneficial, either to the leader or to the organisation that the leader so assiduously nurtured. It requires enormous mental discipline and emotional strength on the part of the leader to deal with this post-succession reality. This challenge of letting go is perhaps more formidable than the entrepreneurial challenge the leaders take on while setting up or building their organisation.

How can leaders cope with this challenge? At a practical level, the retiring leaders have to develop certain avenues for recreating their identity as different from or larger than the organisation that they had created. Such an identity can come from espousing any cause that is dear to them for which they were unable to devote enough time during their highly demanding entrepreneurial career. It is well-known that the late Dr Venkataswamy started Aravind Eye Hospitals after his retirement from government service, driven by his passion to provide affordable eye care to the poor. Dr. Swamy’s identity as the founder of Aravind eye hospitals is perhaps far more enduring than his otherwise illustrious career as an ophthalmic surgeon and professor in Tamil Nadu Government service.

But it doesn’t always have to be such a serious cause. Even leisure or spiritual activities taken up in good measure at a personal level can provide the fun, enjoyment and satisfaction required to fill the void created by the loss of centrality, power and control. Some leaders have also effectively used the tactic of physically staying away from the organisation they once dominated, to avoid unwanted entanglement that could result from such proximity.

What about ownership? Leaders, founders and inheritors alike, can legitimately continue to have ownership interests in the organisations they once started or led. The healthier way to protect ownership interests would be to nominate a ownership successor or representative who can safeguard the leader’s interests, by using the very same governance mechanisms which the leader had steadfastly nurtured during his or her tenure of leadership.

At a philosophical level, leaders, like all other humans, have to come to terms with their own mortality. Not withstanding their enormous reserves of energy, commitment and passion, a time will always come - sooner or later when the organisation will have to survive and flourish without them being around. This realisation and acceptance is perhaps the starting point for a process of adjustment that successfully takes the leader through the post retirement, post succession phase in their lives.

All this requires deep introspection, prudent planning, and a lot of discipline on the part of the leader. But one thing is sure – the initiative and the responsibility lies with the leader. Others can help, but only if the leaders choose to help themselves. Perhaps, how gracefully they let go is what separates the iconic leaders from the rest. ALSO READ:Two sides of the Infosys coin

It's critical for Infosys to be a company of innovators: Vishal Sikka

- By Prof K Kumar, Faculty in the Entrepreneurship area at the NS Raghavan Centre for Entrepreneurial Learning (NSRCEL) at IIM Bangalore. Views are personal.

Tweets by @forbesindia
Ten interesting things that we read this week
Zippr: In the right direction