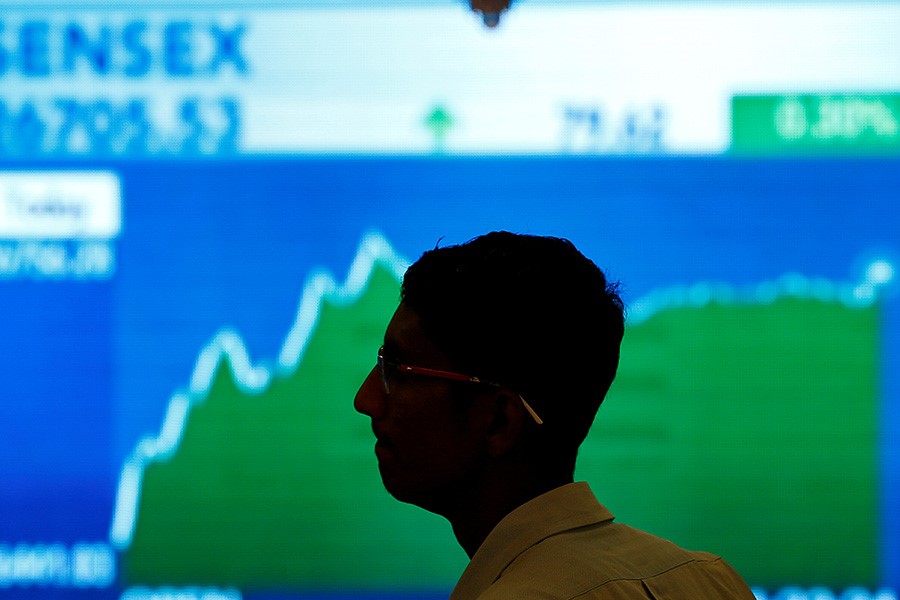 (Image: Danish Siddiqui / Reuters). Caption: A man looks at a screen displaying news of markets update inside the Bombay Stock Exchange (BSE) building in Mumbai.
It was not the best of Diwalis for retail investors. The special Muhurat trading session on Thursday, which marks the beginning of Samvat 2074, lacked the power of the festival of lights as the Sensex slid by 194 points to close at 32390. But then, it was just a one-hour session and we should not take the slide too seriously. Or should we?

The Indian market is not on the radar of foreign institutional investors. Over the last six months Indian markets have returned 10 percent (in dollar terms) as compared to the MSCI Emerging Markets index which has returned 17 percent.

If one looks at the last three months, returns from India is 2 percent, compared with Brazil’s 18 percent and Russia’s 10 percent.

While the Indian market is sustaining itself on liquidity (mutual funds are investing over Rs 5,000 crore every month through systematic investment plans), the foreign investor is getting vary of the rich valuations here.

A recent Kotak Institutional Equities research note reads: “The sharp relative movement in prices of large-cap stocks reflects the market’s reactions to short-term developments including sector-specific M&A and potential regulatory developments.
However, the rich valuations of several sectors and stocks, which will likely face large disruptions, suggest that the market is quite sanguine about long-term potential disruptions to most business models over the next few years.”

But right now, analysts are not worried about the long-term disruption that will affect sectors like automobiles, software or for that matter even FMCG. They are trying to find out if the earnings cycle will be back in the next two years.

“This is an interesting market. I have sold out all my auto-ancillary holdings. Apart from software and pharma all other sectors are overvalued. But then, if the rupee depreciates then these export-oriented sectors will benefit,” says a fund manager who manages a multi-cap portfolio.

He is confident that earnings will come back by 2019. Another Kotak Institutional Equities note dated October 3, 2017 says that the earnings of the Nifty 50 companies are expected to grow at 2.5 percent for FY18 and 24 percent in FY19. The note is bullish on banking, telecom and cement.
While there is a large consensus on the prospects of banking and cement sectors, but fund managers have conflicting views on the Indian software industry.
Most of the old school fund managers believe that the software industry will grow at the nominal growth of the GDP and the industry will adapt to the new changes (read artificial intelligence and machine learning). The younger lot believes that the software industry is not an opportunity. They don’t want to look at an industry that will post single-digit growth when there are other interesting companies in the mid-cap segment that are recording much faster growth rates.

However, this is, in all probability driven by demonetisation and GST, two very significant reforms that have caused temporary disruption in the normal functioning of the economy.
However, as things normalise, growth rates are expected to recover smartly over the next few quarters. Monthly data for July, August and September for several parameters already points in that direction,” his note says.

While the Muhurat trading may not have been the most exciting part of your Diwali, fund managers and analysts don’t want to get worked up by short-term changes. They are already looking at the future.

In his note, Jain points out that every 10-year period where the Sensex grew at sub-7 percent CAGR has been followed by a 14-19 percent CAGR in the next decade. Interestingly, we are at such an instance again, as CAGR of the Sensex in last 10 years is just 6.1 percent.

But the problem is that the market has already discounted the future earnings in its valuation and that is what worries people like Sanjeev Prasad, co-head and managing director Kotak Institutional Equities. He believes that the world is going through a lot of change and it is very difficult to discount all the changes in valuation models. His October 13 note states that India will need strong earnings support to stand apart as a standalone asset class.

“India’s long-term consumption story emanating from its favourable demographics has been the key investment theme for investors given the lower relevance of other themes (commodities, exports, infrastructure and technology).

However, valuation of ‘consumption’ part of the market is quite rich. At the same time, we see short-term risks of margin/profitability compression as margins have moved to cyclically high levels and longer-term risks from disruption to business models.”

So what should an investor do? The answer is rather simple. Maintain your SIPs and trust your fund manager. Investors can look forward to buying pharma funds or software funds, depending on their beliefs that these sectors are into deep value and not into value traps.