New York has tamed the virus. Can it hold off a second wave?

The sustained low rate of infection has surprised local health officials. But a resurgence may be inevitable, despite the state's and city's best efforts 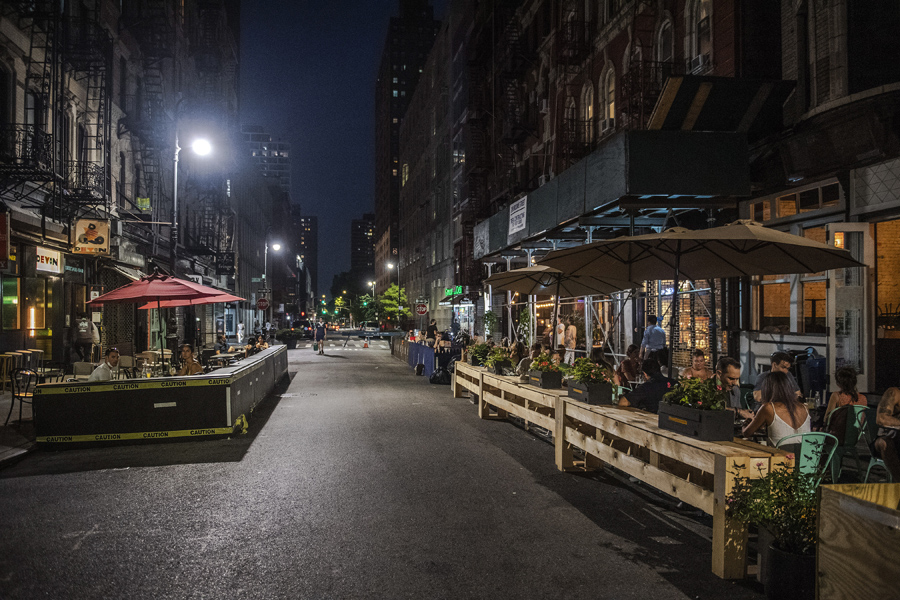 Sidewalk dining on the Lower East Side in New York, July 19, 2020. The sustained low rate of coronavirus infection has surprised New York City health officials, but a resurgence may be inevitable, despite the state’s and city’s best efforts. (Brittainy Newman/The New York Times).
Health experts in New York City thought that coronavirus cases would be rising again by now. Their models predicted it. They were wrong.

New York state has managed not only to control its outbreak since the devastation of the early spring, but also to contain it for far longer than even top officials expected.

Now, as other places struggle to beat back a resurgence and cases climb in former success-story states like California and Rhode Island, New York’s leaders are consumed by the likelihood that, any day now, their numbers will begin rising.

The current levels of infection are so remarkable that they have surprised state and city officials: Around 1% of the roughly 30,000 tests each day in the city are positive for the virus. In Los Angeles, it’s 7%, while it’s 13% in Miami-Dade County and around 15% in Houston.

The virus is simply no longer as present in New York as it once was, epidemiologists and public health officials said.

But nothing is static about the viral outbreak, experts cautioned. The question now is whether the state, where 32,000 people have died of the virus, can keep from being overwhelmed by another wave, as threats loom from arriving travelers, struggles with contact tracing and rising cases just over the Hudson River in New Jersey.

Officials have also been watching warily as cities once seen as models in virus containment struggled with new outbreaks. Hong Kong moved to ban indoor dining and gatherings of more than two people in late July amid a sharp rise in infections. International flights were diverted from Melbourne, Australia, as cases mounted.

In more than a dozen interviews, epidemiologists, public health officials and infectious disease specialists said New York owed its current success in large part to how New Yorkers reacted to the viciousness with which the virus attacked the state in April.

State officials shut down schools and businesses, sacrificing jobs and weakening the economy to save lives. Adherence to mask wearing has been strong. Many vulnerable New Yorkers are still sheltering in their apartments. Others decamped to second homes.

And, critically, Gov. Andrew Cuomo and Mayor Bill de Blasio reopened cautiously, deciding in late June against allowing indoor dining and bars after seeing those activities connected to outbreaks in other states.

“People in New York have taken matters much more seriously than in other places,” said Dr. Howard Markel, a historian of epidemics at the University of Michigan. “And all they’re doing is reducing the risk. They’re not extinguishing the virus.”

Still a resurgence is all but inevitable, public health experts said.

Local beaches have filled on hot weekend days. Diners flock to outdoor restaurants with plywood patios. More than 1.2 million people took the subway on a recent Tuesday, down dramatically compared to a year ago, but more than double what it was on a Tuesday in May.

The same models that predicted an increase in New York City for the summer now see a rise coming in the early fall. Life can be lived outside for now, but will move indoors as the weather cools — just as the flu season is ramping up. Schools are set to open in September.

And confidence in the good numbers themselves could breed complacency about masks and distancing. Already, the city has seen a number of large illicit dance parties and a worrisome spike in cases in the Sunset Park section of Brooklyn.

“I’m not optimistic about a sustained end to COVID-19 in New York,” said Dr. Irwin Redlener, director of the Pandemic Resource and Response Initiative at Columbia University. “Even though we had that horrible peak in April, when we were the epicenter, there are still millions of people who are vulnerable.”

Among the biggest threats, officials and epidemiologists said, were out-of-state travelers, who continue to arrive in New York despite a state-mandated 14-day quarantine.

The governor instituted the quarantine requirement for anyone coming to New York from a state with high infection rates. Eight states were initially affected; the list has since grown to 31 states, Puerto Rico and the Virgin Islands.

More than 160,000 people have been subject to the quarantine since the start of June, state officials said. But enforcement of the order is near-impossible, and the state could not say how many have actually quarantined.

About 20% of new positive cases in New York City have been connected to out-of-state travel, city officials said, with Florida, Georgia and New Jersey the top departure points. Last week, de Blasio said drivers entering the city could be pulled over at random to be informed of the state’s quarantine rules.

The majority of those reached by the city’s contact tracers have not shared the names of anyone they might have infected: More than 12,500 people who tested positive did not give their contacts to the city, out of about 22,000 total. Those who did shared an average of between two and three contacts.

But city officials could not say how many of those testing positive for the virus were already known to contact tracers — in other words, how many new cases had a connection to a previous positive case. That is considered by infectious disease experts to be a key metric for gauging how under control an outbreak is.

Dr. Jay Varma, the mayor’s senior adviser for public health, said the city’s program had prevented “thousands” of new infections, based on the number of people identified as symptomatic contacts who said they were in quarantine. Just over 200 people have isolated themselves in a city-funded hotel since the start of June.

“I don’t think it’s correct to insinuate that the work that we’re doing is not having an impact when you clearly see the impact in terms of disease numbers in New York,” Varma said.

Patterns of infection around the state suggest New Yorkers, like most Americans, are chafing under pandemic restrictions.

In New York City, neighborhoods with the highest rate of infection are increasingly found in Manhattan — Hell’s Kitchen or the Financial District, for example, which are home to wealthier residents — in addition to the parts of the Bronx and Queens that have long been hard hit.

She said the most important factor in New York’s success so far has been broad acceptance of masks and social distancing, adding, “I think it would be foolish of us to not plan for an inevitable second wave.”

While antibody surveys have suggested 1 in 5 New York City residents may have already been exposed, public health officials do not believe herd immunity is behind the low numbers, or could be relied on in the future.

What may protect New Yorkers who decide to buck the rules and gather in groups without masks is the fact that so many of their neighbors are still masking up, said Barbot.

“If a new infection gets introduced into the community, it will be a terminal transmission, meaning that it won’t go any further,” she said. “More people wearing face coverings seems to be in line with that.” She cautioned that it was a theory and the data is not yet there.

And even at the currently low levels, the number of new virus cases in New York City — 386 reported positive on Tuesday out of 46,185 tested, according to state data — is still too great for its contact tracers to effectively determine where people are becoming infected, said Barbot. The new norms of behavior have to continue for the foreseeable future, she said.