If Tesla's market capitalization remains above $100 billion on average over a six-month period, chief executive Elon Musk will have the option to buy about 1.69 million shares at about $350 each—a payout worth more than $370 million 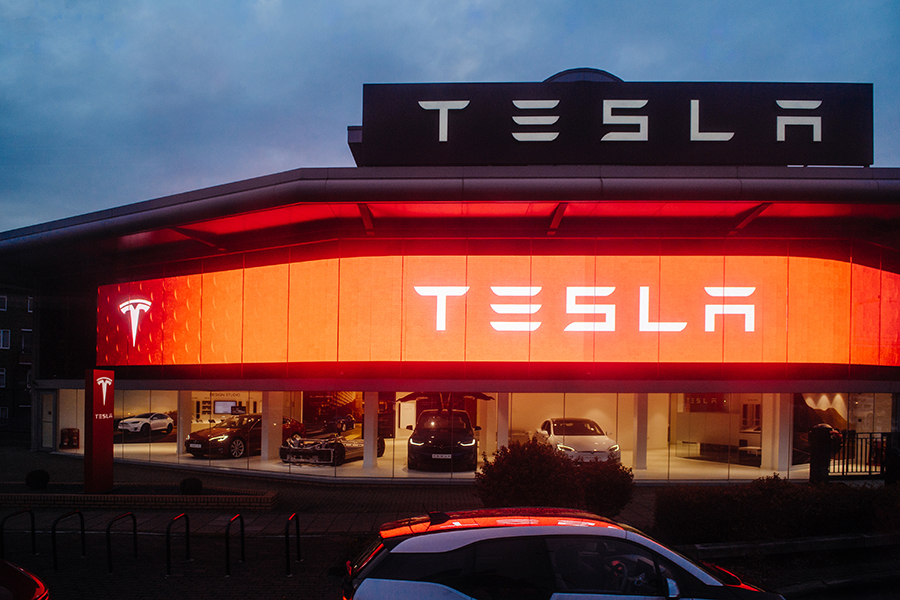 Tesla’s share price hit a record high Wednesday, surpassing a threshold that could ultimately unlock hundreds of millions of dollars in bonus compensation for its chief executive, Elon Musk. The award is contingent on a $100 billion market capitalization for Tesla — the milestone reached Wednesday — over a sustained period. The stock closed at $569.56 per share, giving the company a valuation just shy of $103 billion. If the market capitalization remains above $100 billion on average over a six-month period, including at least 30 consecutive days, Musk will have the option to buy about 1.69 million shares at about $350 each — a payout worth more than $370 million before taxes at the current stock price. Forbes and Bloomberg estimate Musk’s current net worth at about $32 billion, about half composed of Tesla shares. Tesla’s gain of more than 4% in Wednesday’s trading extended a recent surge in which its share price has more than doubled in three months. Along the way, Tesla’s market value surpassed that of General Motors and Ford Motor Co. combined, reflecting a faith among some investors in the company’s ability to disrupt the automotive industry. At the same time, the stock is also one of the biggest targets of short-sellers, ranking alongside much larger companies like Apple and Microsoft in interest from investors who hope to profit from what they see as an inevitable decline in the share price. According to S3 Partners, a financial technology and data firm, the number of Tesla shares shorted has hovered around 26 million to 27 million — about 20% of the shares available for trading — for some time. “The amount is just telling you that the soap opera continues,” said Bob Sloan, founder of S3 Partners. “The company’s stock has doubled, and the doubters are still the doubters.” Tesla’s stock started surging in October when the company reported an unexpected profit for the third quarter after recording a $1.1 billion loss in the first half of 2019 as it struggled to produce and deliver its Model 3 sedan. Earlier, in September 2018, Musk had agreed to step down as chairman in a settlement with the Securities and Exchange Commission after it had accused him of misleading investors with claim on Twitter about having “funding secured” to take the company private. Even with that settlement, Tesla remains under regulatory scrutiny. Last week, the National Highway Traffic Safety Administration said that it was considering a request to investigate claims that some Tesla vehicles have accelerated on their own. The company dismissed the claims as “completely false” in a blog post. The author of the request, Brian Sparks, acknowledged in an interview with CNBC that he was shorting Tesla’s stock. The highway safety agency is also investigating at least 14 crashes involving Tesla vehicles in which Autopilot, its driver-assistance system, is believed to have been engaged. The National Transportation Safety Board is meeting next month to look into one such crash in Mountain View, California, in 2018. Despite its difficulties, the company has become a force in its industry, said Colin Rusch, an analyst at Oppenheimer. “We’re looking at a company that we think has a very sturdy and insightful strategy in terms of the narrowness of the focus on the technology and really looking at disrupting the industry in a way that consumers find compelling,” he said. Rusch is one of several Tesla analysts who increased their target price for the company’s stock this month, reflecting growing faith on Wall Street that the company can manage a global expansion and steal market share from established automakers that have been slow to develop and sell electric vehicles. The company has shown that it can learn quickly from its mistakes and has displayed “larger ambition” than its peers, Rusch said in a research note. It also benefits from a large fleet of vehicles on the road collecting data that could be used to train future autonomous driving systems.

Tweets by @forbes_india
India to grow at 5.5 percent in 2021, but a lot depends on the Budget
How Jeff Bezos' iPhone X was hacked