In an unusual move meant to avoid interruptions like those that marred the first debate, the organizers said they would turn off each candidate's audio feed while his rival had the floor 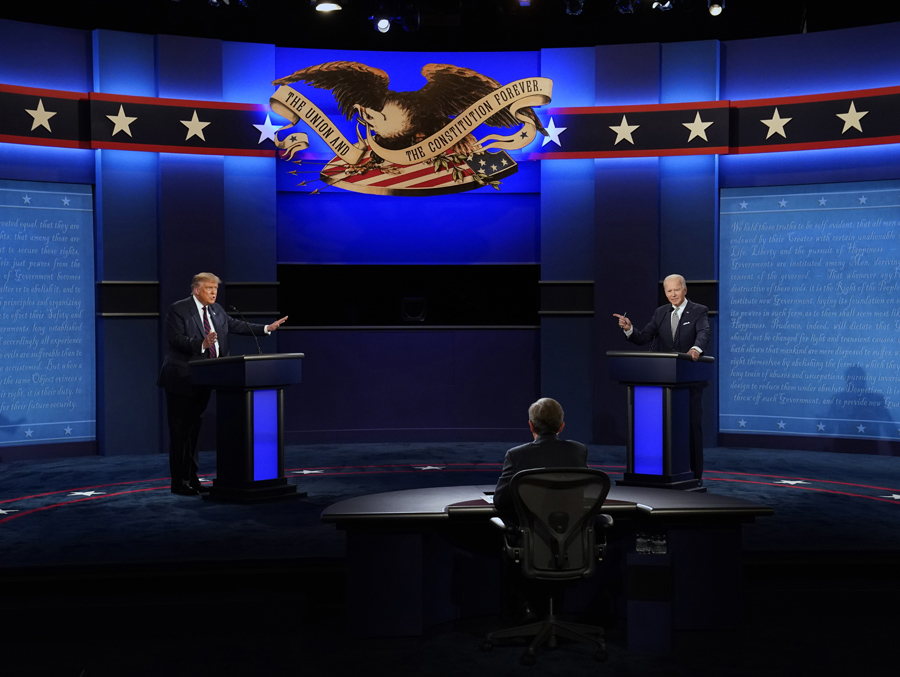 President Donald Trump and former Vice President Joe Biden, the Democratic nominee, at the first presidential debate in Cleveland on Sept. 29, 2020. The microphones of President Trump and Biden will be muted during portions of the final presidential debate on Thursday, Oct. 22, the organizers said late Monday, in an unusual effort to avoid the unruly spectacle of the candidates’ first meeting in Cleveland last month. (Doug Mills/The New York Times)

This time, the candidates will get the silent treatment.

The microphones of President Donald Trump and Joe Biden will be muted during portions of the final presidential debate Thursday, the organizers said late Monday, in an unusual effort to avoid the unruly spectacle of the candidates’ first meeting in Cleveland last month.

The debate’s rules remain the same: Each candidate will be allotted two minutes to initially answer the moderator’s questions. But the Commission on Presidential Debates said it would turn off each candidate’s audio feed while his rival had the floor.

Once each candidate has delivered his two-minute reply, Trump and Biden, the Democratic nominee, will be allowed to freely engage with each other for the remainder of each 15-minute segment, with both microphones fully functional.

The incoherence of the first debate — during which Trump’s relentless interruptions of Biden and the moderator, Chris Wallace of Fox News, derailed the proceedings — put pressure on the nonpartisan debate commission to improve enforcement of the rules, despite its members’ long-standing reluctance to change any aspects of the debates in the middle of a campaign.

The moderator of Thursday’s debate in Nashville, Tennessee, Kristen Welker of NBC News, will not be in control of turning the candidates’ microphones on and off; that task will be left to the commission’s production crew. There is also the potential for a new kind of gaffe: Trump’s voice may be picked up by Biden’s microphone, and vice versa, meaning that an attempted interruption may still be heard, at least faintly, by viewers watching at home.

In a statement, the commission said it had acted out of concern that the first debate had fallen short, “depriving voters of the opportunity to be informed of the candidates’ positions on the issues.” But it also acknowledged that the two campaigns, which were notified only shortly before the announcement, might not “be totally satisfied.”

“We are comfortable that these actions strike the right balance and that they are in the interest of the American people, for whom these debates are held,” the commission said.

Trump and his aides have signaled deep hostility to any outside control of his microphone at the debate, even sending a belligerent letter to the commission calling it “completely unacceptable” for “an unnamed person” to shut off a microphone.

Late Monday, Trump told reporters on Air Force One, “I just think it is very unfair,” according to a pool report. He added, “It is very unfair that again we have an anchor who is totally biased.”

The president’s campaign manager, Bill Stepien, said Trump was “committed to debating Joe Biden regardless of last-minute rule changes.” But he also accused the commission of adopting the microphone rule to aid Biden, part of a days-long effort by the Trump campaign to undermine the integrity of the commission and to paint it as biased toward the Democratic candidate.

Earlier Monday, Stepien — who mockingly referred to the nonpartisan commission as the “Biden Debate Commission” in a tweet — claimed that the commission had “promised” that the debate Thursday would be about foreign policy and asked for it to discard the six subjects announced last week by Welker, the moderator. (The topics are the coronavirus, climate change, national security, leadership, “American families” and “race in America.”)

In fact, the debate organizers did not announce such a plan to focus on foreign policy, saying that the third debate would mirror the format of the first, with six subjects selected by the moderator. (It is true that in some campaign years, the third presidential debate has focused on foreign policy.)

A Biden spokesman, T.J. Ducklo, said Monday that Stepien had sent the letter “because Donald Trump is afraid to face more questions about his disastrous COVID response,” adding: “The campaigns and the commission agreed months ago that the debate moderator would choose the topics.”

Stepien’s letter did not mention baseless accusations that Trump has made that Welker, a respected White House correspondent, is biased. Trump’s aides, including a top adviser, Jason Miller, have previously spoken warmly about Welker, calling her “a very good choice” to oversee the debate.

The debate commission has had a tumultuous year. Its attempt to hold a virtual debate in Miami over coronavirus concerns prompted Trump to withdraw; that debate was eventually canceled, and the candidates held separate televised town hall events instead.

Alan Schroeder, an emeritus professor of journalism at Northeastern University who wrote a history of presidential debates, said Monday that the microphone change “sounds good in theory, but I don’t see it as solving the problem.”

“There might be — might be — two uninterrupted minutes for each candidate in the opening stretches of each segment, but then what?” Schroeder asked. “Both participants must agree to a common vision of what the exercise is supposed to be. As long as one of the candidates fails to accept the basic premise of ‘I listen while you talk, you listen while I talk,’ the essential problem remains.”