Two to three years is optimistic for a full recovery, experts say 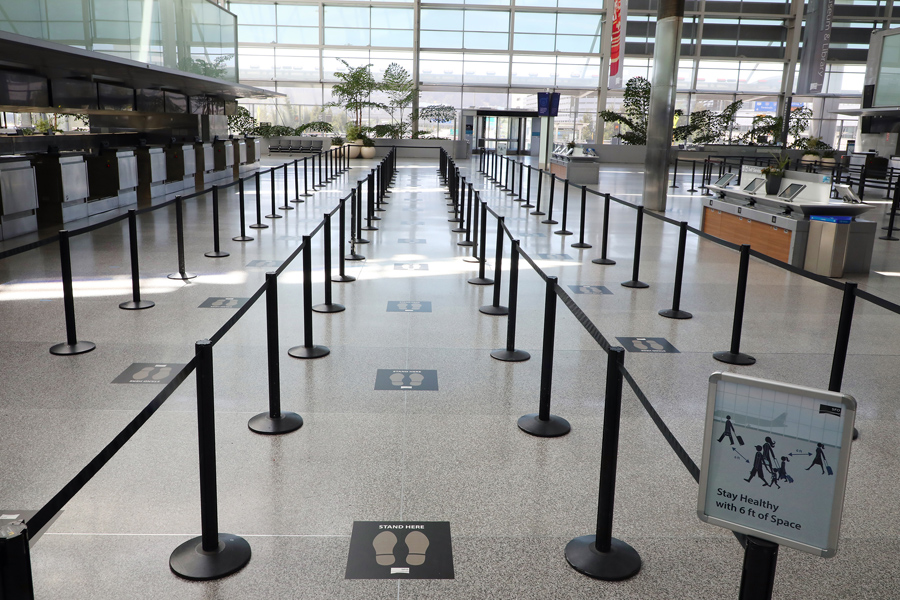 A nearly deserted terminal on the Friday before Memorial Day weekend at San Francisco International Airport, May 22, 2020. While business travel evaporated in a flash when the coronavirus hit, it may take two to three years for it to fully recover, far longer than many travel experts initially predicted. (Jim Wilson/The New York Times)

While business travel evaporated in a flash when the coronavirus hit, it may take two to three years for it to fully recover — far longer than many travel experts initially predicted.

Even that timeline, said Henry Harteveldt, president of Atmosphere Research Group, a travel market research firm in San Francisco, depends on “the broader economy, the industry a firm operates in and demand for its products or services, as well as the public health environment.”

And two to three years may be too optimistic — at least for a recovery by the major airlines.

Michael Derchin, an airline analyst, described the effect of the coronavirus pandemic on carriers as “Sept. 11 and the Great Recession on steroids.” He estimated that it could take airlines seven years, if not longer, to recover.

While business travelers make up about 10% of all passengers on the major airlines — including American, Delta, United, Lufthansa and Singapore — they generate half the airlines’ revenue, Derchin said. And Harteveldt estimated that business travelers were responsible for 55% to 75% of major airlines’ profits worldwide. Not only do business travelers buy more expensive and profitable tickets, they are also more likely to hold airline credit cards and buy airport lounge memberships, among other services.

As for hotels, business travelers generate about 70% of Marriott’s and Hilton’s global revenues, said Robin Farley, lodging analyst at UBS. She predicted that the common measure of hotels’ financial health, revenue per available room, would not return to 2019 levels until 2023 or 2024.

Michael Bellisario, lodging analyst for financial services firm Baird, also doesn’t see revenue per available room recovering until 2023 at the earliest, he said. He added that he believed that large, urban U.S. markets, which generally contain bigger, more profitable hotels, would lag behind smaller ones.

Marriott is seeing a slow return of domestic bookings, though many are by leisure travelers in vacation destinations. It said about 70% of its corporate clients worldwide were expected to ease or lift restrictions on employee travel within the next three months.

Some business travelers are keeping cars up to seven days, compared with less than three days before the pandemic. They are driving distances — like from St. Louis to Chicago — that they previously flew, Moore said.

Recent polls also raise questions about the timing of a rebound in business travel and its possible replacement by virtual meeting platforms. In a survey by Institutional Investor magazine last month, more than half of the chief information officers, portfolio managers and other investment decision-makers said they did not expect to travel again until November and December, at the earliest. And 93% of the more than 300 global companies surveyed in May by the BCG Henderson Institute, the research organization of the Boston Consulting Group, expected to permanently change “remote working and meeting policies,” while 66% anticipated permanently changing travel policies.

Typical of the people who would normally be traveling for work but are not is Erin Eckert, director of the infectious-disease portfolio at the nonprofit organization RTI International in Washington. Before the pandemic, she spent about a quarter of her time traveling for malaria-related research across Africa. Now she is grounded indefinitely, working out of her home.

Then there are self-employed business travelers whose visits to clients’ offices have been suspended, like Paul Grizzell, an organizational consultant in Woodbury, Minnesota.

Grizzell, who used to spend three weeks each month visiting clients, mostly in the United States, hasn’t traveled since late February, he said. Instead, he has been working with clients remotely on Zoom, which, he said, “is not the same as being in a conference room with a team of people, working on a business problem, eating lunch together, catching up on family.”

He hopes to resume his domestic business trips this summer and international travel “maybe in December or January,” once his clients return to their offices.

Among the challenges with resuming business travel are the varying guidelines put out by airports and airlines. For companies to be comfortable sending employees on business trips, “there have to be somewhat consistent, clearly communicated guidelines,” said Mike Janssen, global chief operating officer and global chief commercial officer of BCD Travel, a travel management company.

“If I’m flying to Reno and connecting in Denver,” he said, “I may not run into the same rules at each airport, and I don’t know what to prepare for. I can’t determine if there’s risk, which will keep me from wanting to take that trip.”

Also potentially dampening business travel is the prospect of a lawsuit if a traveler gets sick. Janssen said he had heard “plenty of talk” about liability waivers that would protect companies from being sued, and they are the source of debate in individual states and on Capitol Hill.

“The threat of litigation will potentially prevent some companies — even ones that are going to great lengths to exercise caution and safety protocols — from restarting their travel programs as quickly as they’d like to,” he said.

Similarly, Harteveldt said that until companies were confident about their legal responsibility to protect the health, safety and well-being of their employees, “they won’t want to take the responsibility and risk of sending them back on the road.”

Companies, he said, “will need to feel confident it will be easy to travel to a destination; that there’s a safe, clean and healthy environment created by airlines and airports; that accommodations are safe; and that employees can quickly return home if there’s a spike in the disease or a shutdown at either end.”

Adding to the complications for Americans is the European Union’s decision to bar travelers from the U.S., as well as recent decisions by England and Scotland to maintain their 14-day self-quarantine requirement for U.S. travelers, even as they ended it for dozens of other countries. In the U.S., some states are requiring quarantines for travelers from other states where virus cases are rising. Chicago imposed similar rules last week.

Michael Premo, chief executive of the Airlines Reporting Corporation, which settles ticket transactions between airlines and travel agencies, said countries’ borders would not fully reopen until there were a vaccine and treatment for the virus, as well as “more stringent travel protocols.”

“Until international travel returns somewhat to normal, it will put a big damper on corporate travel activity,” he said.

Tweets by @forbesindia
The super power of tomorrow? Being "Indistractable"
Photo of the Day: CBSE students celebrate results