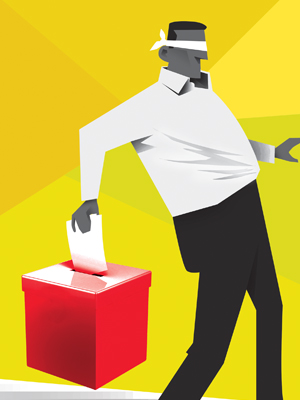 Half of the American people have never read a newspaper. Half never voted for president. One hopes it is the same half.
Gore Vidal

Elections belong to the people. It’s their decision. If they decide to turn their back on the fire and burn their behinds, then they will just have to sit on their blisters.
Abraham Lincoln

Free election of masters does not abolish the masters or the slaves.
Herbert Marcuse

Popularity should be no scale for the election of politicians. If it would depend on popularity, Donald Duck and The Muppets would take seats in senate.
Orson Welles

People never lie so much as after a hunt, during a war or before an election.
Otto von Bismarck

An election is coming. Universal peace is declared, and the foxes have a sincere interest in prolonging the lives of the poultry.
George Eliot

If God wanted us to vote, he would have given us candidates.
Jay Leno

A politician should have three hats. One for throwing into the ring, one for talking through, and one for pulling rabbits out of if elected.
Carl Sandburg

During a campaign the air is full of speeches—and vice versa.
Author Unknown

Tweets by @forbes_india
Expansion Takes a While in India: Cinepolis CEO
A First: Indian Elections, Live On BBC