While the government has been successful in slowly bringing the farmers into the formal lending sector, there arises yet another related issue of loan repayment 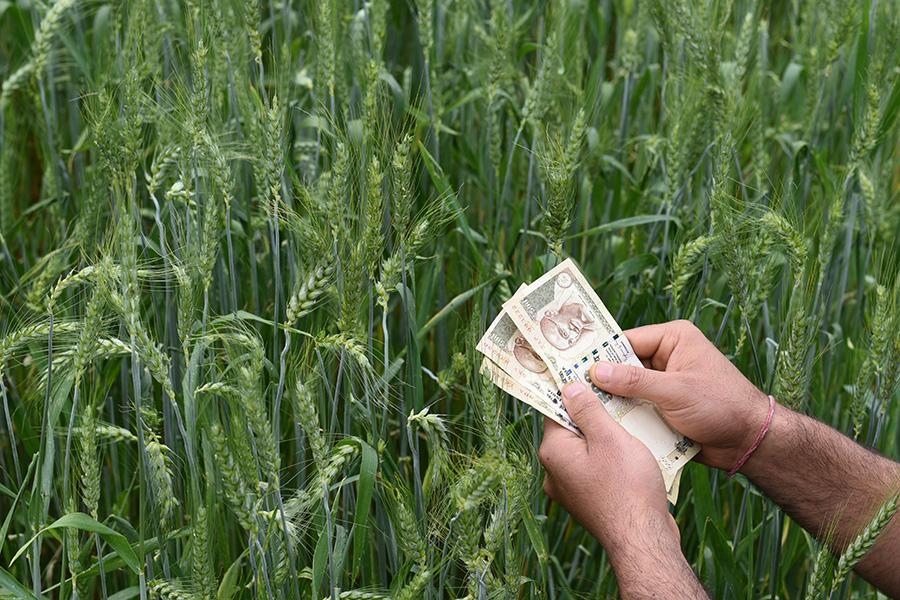 Agriculture being an integral part of India’s economy has been the focus of the government’s development agenda. The unwavering commitment of the government to farmers’ welfare can be seen by various policy measures. One such measure is the governments’ push to bring in farmers into the formal lending sector. Formal agricultural credit has hence shown consistent progress over the years with a total lending of 5.11 lakh crores in 2011-12 to 8.45 lakh crores in 2014-15. While the government has been successful in slowly bringing the farmers into the formal lending sector, there arises yet another related issue of loan repayment. To help the farmer deal with this issue, the government has time and again given loan waivers in case of agricultural loans. The Agricultural Debt Waiver and Debt Relief Scheme in 2008 led to the government waving about Rs. 52,500 crore in loans held by about 3.45 crore farmers as per a report released in August 2015 by the Comptroller and Auditor General of India (CAG). The year-wise split of the total waiver under the ADWRDS is given in Table 1. 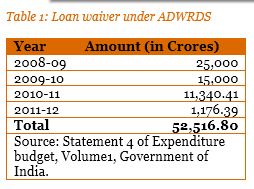 As per the Niti Aayog report on doubling farmer income, the aggregate farm productivity of crop sector increased by 3.1 percent during 2000-01 to 2013-14. These incomes are projected to grow at a rate of 25 percent over a period of 10 years.  Further, the cost of agri inputs, farm labor, handling and logistic cost for farm produce is growing between 8-15 percent annually, thereby, increasing pressures on profitability of farm operations and subsequently on loan repayment capacities. This situation is aggravated during seasons having bumper production or natural calamities.

This leads to increase in Non-Performing Assets (NPAs) in the sector. The total NPAs of Scheduled Commercial Banks (SCBs) in agriculture has increased from Rs. 7149 crore in 2008-09 to Rs. 30200 crore in 2012-13. Also, NPA in agriculture as a percentage of outstanding loans by SCBs during the same time has increased from 1.95 percent to 4.77 percent in 2012-13. Figure 1 shows the scenario of NPA is agricultural lending by the SCBs. 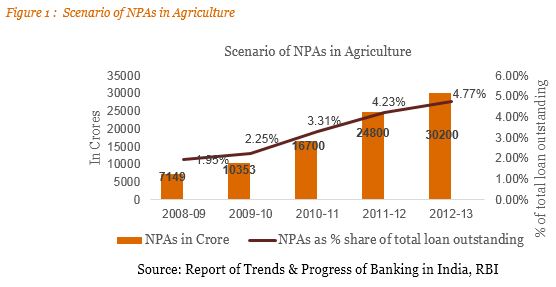 Recently there have been instances of loan waivers to farmers with Uttar Pradesh government being the first one announce loan waivers. Maharashtra government also followed suit after widespread agitation by farmers for loan waivers. Besides, such agitation are also going on in Madhya Pradesh and farmers from Tamil Nadu staged a protest in New Delhi. Though loan waivers are temporarily necessary and act as a good stop gap arrangement since the farmers are unable to repay their debts due to fall in the price of agricultural produce or due to decreased revenue owing to crops loss. There needs to be long terms solution to farmer woes.

With global warming becoming a major area of concern and climate change becoming a reality, there needs to be carefully thought measures to combat erratic climatic conditions leading to crop loss and also ways to protect farmers from price risk rising because of market forces. Figure 2 below shows the variability of the monsoon as a percentage of the normal rainfall in India from the year 2006 to 2015.

Climate resilient agriculture is a way to adapt to climate change and mitigate any risk arising out of erratic climatic conditions. Steps need to be taken conserve soil health, sustainably manage water resources, among others. Besides there needs to an impetus to the use of improved propagation materials such as drought resistant seed varieties, pest and disease tolerant varieties of crops. Currently, the total area under irrigation as percentage of the net sown area is about 48 percent which needs to be improved significantly to help assured irrigation for crops and also reduce the dependence on rainfall. Figure 3 shows the percentage of the net sown area under irrigation from 1999-2000 to 2013-14.  Another major aspect with respect to irrigation is focus on use of micro irrigation techniques which not only helps in water use efficiency but is also known to help increase productivity and per hectare profitability. As per the Niti Aayog report, the district level data show that per hectare productivity of all crops was approximately Rs. 56,000 under irrigated conditions as compared to Rs.35,000 for unirrigated conditions.  Besides irrigation, diversification towards high value crop and increasing the cropping intensity will also result in increasing farmer income. 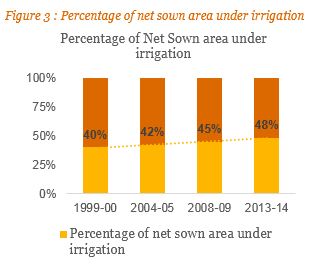 Recent marketing reforms such as e-NAM, e-auction halls, computer aided auction centres have been taken to increase transparency in market processes and increase price realisation to farmers. Though there is no study available as yet on what could be the impact on various market reforms at the national level, however some evidence of online marketing by farmers of Unified Market Platform in Karnataka shows shows significant benefit to farmers. The analysis of the price gain reveals an increase of upto 13 percent in crop prices. This further translates to 9.1 percent increase in the farmers income as per the Niti Aayog report.

The desired results of securing high farm incomes for the farmers can be achieved through systematic and long term reforms focusing on productivity, price stabilisation, market linkage, integrated farming with livestock and improving resource efficiency in farming operations. Such measures will also help to achieve the PM’s vision of doubling farmers’ income by 2022.

The author is Director - Agriculture and Natural Resources at PwC India.

5,175
Thank you for your comment, we value your opinion and the time you took to write to us!

Tweets by @forbesindia
Prev
Unleashing the power of financial literacy
Next
Freedom of press: A guaranteed right?