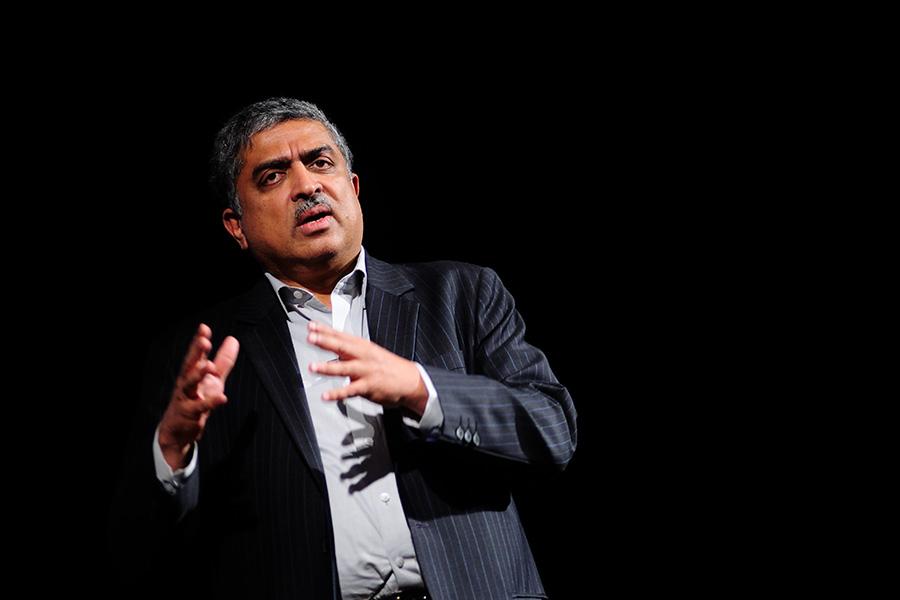 India has the world’s second largest online population, but just 12 percent of the nation’s rural internet users are women. In an effort to bridge the digital divide that isolates rural women, Tata Trusts, in partnership with Google, launched Internet Saathi in 2015. Local nonprofits train rural women to use smartphones to access the internet. These “Saathis” then travel from village to village, where they teach other women the digital basics. By empowering rural women to help other rural women, Internet Saathi has unleashed a powerful multiplier effect: In the three years since its launch, the initiative has put more than 15 million women across India on a path toward improving their socio-economic well-being.

Across India, a growing number of philanthropies are pivoting from “checkbook giving” to giving strategically in order to address India’s most vexing social challenges. They are deploying risk capital aimed at catalyzing population-level change in high-need areas, pursuing what we call “bold philanthropy.” 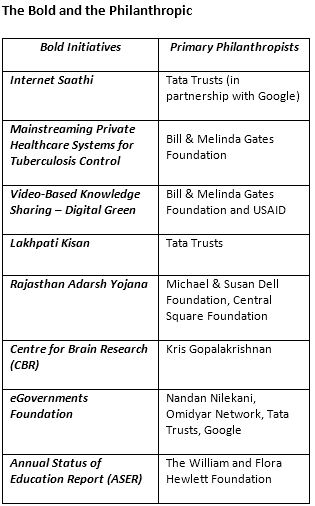 However, there is a dearth of information on the learning journeys of Indian philanthropists who have taken on entrenched social problems. To help fill the gap, we researched eight bold philanthropic initiatives that met our criteria. They include: introducing agriculture best practices to 1.5 million smallholder farmers; charting pathways for more than 100,000 tribal households to irreversibly rise out of poverty; building model schools in 10,000 village clusters in Rajasthan; and shifting the national and global discourse on education, from boosting school enrollment rates to improving learning outcomes.

When we studied the eight bold initiatives, three themes emerged as vital to amplifying impact:

Collaborate with organizations that possess complementary capabilities. No single actor can address every element of a social problem. At some point, the lead organization will have to become adept at partnering. Collaboration can come to life in several different ways, such as by pooling philanthropic capital with other funders. Philanthropists can also work with the government, the private sector, and nonprofits to scale impact or strengthen a field.

The Centre for Brain Research (CBR) exemplifies the collaborative mindset, as its founding funder has fostered partnerships with a range of organizations in the field of neuroscience. In 2014, Kris Gopalakrishnan, the co-founder and former executive vice chairman of Infosys, established CBR with a gift of Rs255 crore ($38.5 million) over 10 years.

CBR has an audacious North Star goal—to find a cure for Alzheimer’s disease—but Gopalakrishnan is not going it alone. He established CBR at the Indian Institute of Science in Bengaluru and worked with its faculty to identify critical gaps in brain research. CBR is collaborating with leading Indian and international medical and research institutions on a landmark longitudinal study that will track ageing related data among 10,000 study participants over 20 years. It is also building an India-specific reference genome, partnering with 16 other Indian research institutions.

Course correct to deliver better results. In daring to push past status quo approaches, bold philanthropic initiatives amplify the risk/reward ratio—and quite often, the former can loom larger than the latter. As a result, bold philanthropists and organizations often evolve their programs and make mid-flight corrections when they encounter challenges or opportunities to improve. Case in point: eGovernments Foundation (eGov).

In 2003,  Nandan Nilekani, co-founder of Infosys, and Srikanth Nadhamuni, CEO of Khosla Labs, launched eGov, which has raised funding of more than Rs52 crore ($7.8 million) to date, thanks to additional support from Google, Omidyar Network, and Tata Trusts. eGov’s goal is to beat back a looming crisis: the inability of urban local governments to adequately serve Indian cities’ rising populations. eGov has built a scalable, open-source digital platform, DIGIT, which has government- and citizen-facing modules to improve the delivery of such vital municipal services as sanitation and water.

This year, with the platform’s reach extending to 40 million citizens across five states, eGov shifted its scaling strategy, from partnering with state-based, urban local bodies to working with the central government. The aim: turn DIGIT into a cloud-based, national urban governance platform that all local governments can utilize.

Change the behaviors of key stakeholders. Sometimes, the drag of old mental models—“the way we have always done things” mindset—can make it doubly hard to achieve real progress. Arguably, this conundrum is more pronounced in parts of India, where caste, patriarchy, and tradition can make communities resist change, regardless of their need. The steep challenge for philanthropists and nonprofits is to “change behaviors” without imposing the change. One approach is to elicit change from within.

The Bill & Melinda Gates Foundation confronted this challenge when it invested Rs63 crore ($9 million) and partnered with the government in an innovative pilot project to mainstream private healthcare services for controlling tuberculosis in three highly burdened cities. Although private providers are often the first to diagnose TB patients, more than 1 million cases go unreported in India. After deeply understanding private providers’ motivations, the Gates Foundation and its partners incentivized them to diagnose, notify the government, and treat TB patients per standardized protocols. Since 2014, private-sector TB notification rates in the three pilot cities have significantly increased, and treatment compliance is tracking well.

Collaborating, course-correcting, and changing behaviors are hallmarks of bold, social change initiatives. All three themes are bound by an underlying logic, which our study’s philanthropists embrace: Bold giving initiatives do not always yield big advances. But small, cautious efforts rarely do.

About the writers Pritha Venkatachalam is a partner and Niloufer Memon is a case team leader in The Bridgespan Group’s Mumbai office. Donald Yeh is a principal in Bridgespan’s New York office.

4,814
Thank you for your comment, we value your opinion and the time you took to write to us!