Andre Agassi: "Failure and success are an illusion"

The tennis legend gives his audience a sincere glimpse into the journey of his life; a false image, excelling in what he often hated to do for a living and why reaching No. 1 is not that pleasing. And how to come out on top. 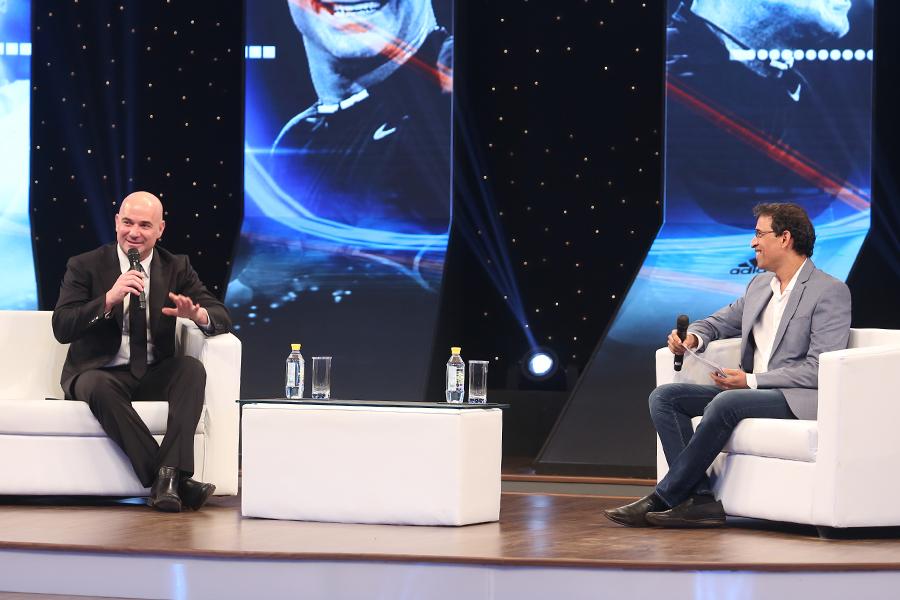 Growing up, one usually has two favourite sports, If in India, the first is usually cricket or football and the second could really be anything else. For me it was tennis and in several ways Andre Agassi, was my hero, possibly for everything I wished to be but could not: the long mullet (thought I had a decent crop at that time), a flamboyant image which usually spelt r-e-b-e-l, whether it be jeans-on-florescent bicycle shorts or earrings and most importantly the technical game you would want to be able to play or go see.

The Agassi I saw – in India at a special conclave, of packed invitees, which announced the rebranding of India Value Fund Advisors as ‘True North’ – is the mellower version, which the world has been seeing over the past decade. Cricket commentator Harsha Bhogle threw the questions and he responded with precisely accurate and firm responses.

The hair (toupee actually) as Agassi wrote in his autobiography had gone quite some time back, so the earrings, loud fashion style and the brashness of youth. This was Agassi the truth-seeker, the realist, the educationist and the father who does not want to dictate life’s journey for his children. The antithesis of the slogan once popularized in the 1990s: “Image is everything’.

Agassi spoke ceaselessly – and most times tinged with a bit of discontent – about the relationship he has with his father (and first coach), Emmanuel.  The story goes that his father started Agassi into tennis when he was 6 months old. “He would hang a balloon over my crib and then tape a ping pong racket to my hand. While I would try to get the ping pong racket off my hand, he would tell my mom, look he’s a natural. I do not remember a life without tennis.

The pressure to become (and remain) the best, Agassi believes, never led him to enjoy the sport he excessed it.

In the course of his conversation Agassi recounted two games clearly which pointed towards his father’s obsessions.

The second was after he lost a hard court match to rival Pete Sampras in 1995. Agassi’s father had just undergone an open heart surgery and was unable to speak due to various tubes. Post operation when Agassi met him at the ULCA Medical Centre, he was frantically gesturing to communicate. “The hospital staff gave him a pen and paper. He wrote: You should have played to Pete’s backhand.”

Agassi recounted the fears of travelling alone to Florida, when he turned professional to the Nick Bollettieri Tennis Academy. As a teenager becoming a great was never on Agassi’s mind. “I always thought of myself as a survivor. When I moved 3,000 miles away from home; [growing up] with other kids at the academy, it was like The Lord of the Flies,” he says.

Starting with his autobiography “Open” (2009), Agassi has been comfortable to talk about his hair loss.

He recounted the tale about playing the 1990 French Open against Andres Gomez from Ecuador.  Agassi had been losing hair rapidly, but decided to wear a wig to hide the hair loss. The night prior to the finals, he used a wrong hair conditioner which ruined his wig. “My brother pinned it to my natural hair and said it will be secure. Just don’t run around too much, his brother told Agassi. “The last thing I was worried about was winning the French Open. I just did not want people getting too close to their television; saying is this what I really saw?” Agassi lost the finals.

But it would be five more years, until Agassi decided to shave his balding head.

“There are many pictures of mine which I want to burn, but at the end of the day, it was an evolution well documented,” says Agassi, referring to his hairstyle and fashion. 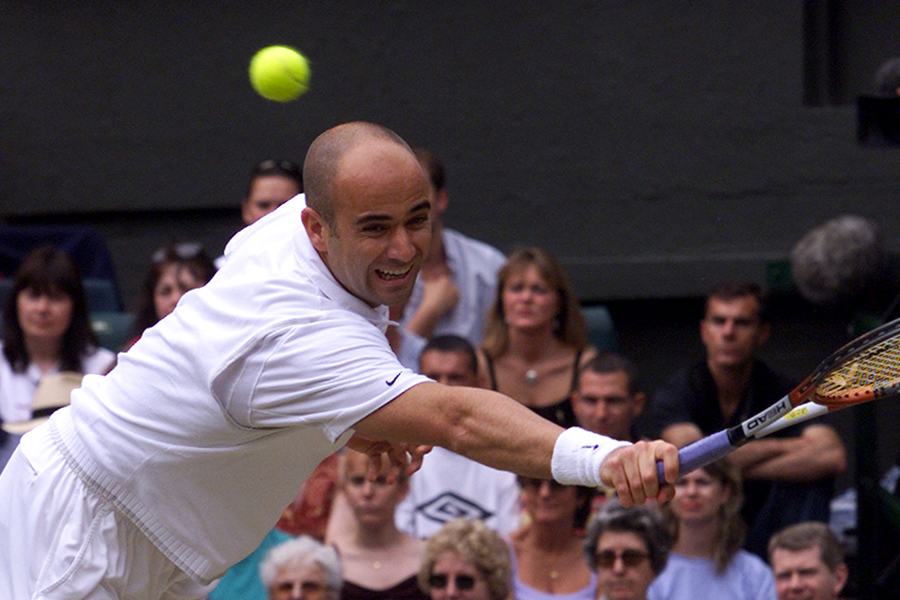 Andre Agassi of the U.S. plays a return to compatriot Pete Sampras of the U.S during the final of the Mens' Singles competition at the Wimbledon Tennis Championships (Image: Reuters)

Agassi went to length to explain about what he called coming from a “tortured perfectionist” background, where his father pushed him towards tennis, much against his will.

“I hated what I did. My dad had a few rules, wake up, play tennis, brush your teeth. He saw money as the fastest road to the American dream and he saw me as the one who would carry the burden of achieving it for the whole family. That feeling of angst and conflict started at an early age. Moving away from home, turning professional, people looking at you and telling you who you should become.”

By late 1995, Agassi reached the No.1 ranking. “Most would think that this is the peak, but I had realised that nothing had changed….it was actually the start of a downward spiral of life, one that left me in a marriage I did not want to be in; one that left me abusing my body with drugs. It was a pretty low point.” In 1996, Agassi had failed to reach any Grand Slam final and by 1997, a wrist injury, a failing marriage [with actress Brooke Shields] and drug-related controversies pulled Agassi down to No. 141 rank, by November 1997.

The tennis legend then speaks about the need to explore one’s own life journey on one’s own terms.

“When I look back I am grateful for many sacrifices my father made but am happy for also how I chose to explore my own journey. It’s difficult to say that it was the right thing for me because the greatest frustration was never knowing what else I would have wanted to do and there is a lot of pain which came with that growth,” says Agassi.

Agassi found the mission to his life at around his lowest point. “My coach said: we do either of two things, decide to quit or start over.”

It was here that Agassi looked for and found his reason to play the sport. “I remember seeing a show called “60 minutes” on great charter school operators, he decided to set up a K-12 (kindergarten to 12th grade) schools in disadvantaged areas of hometown Las Vegas, where he could educate and help children who did not have the opportunities of choices in their life.

Agassi has since funded 69 schools through his philanthropic activities. “I found myself connected to something larger than my life,” Agassi added, in a happier frame.” This was my connection with tennis.”

In the ongoing conversation with Bhogle, Agassi goes back to talking about being a father. “Sometimes when we try to give our children what we didn’t have, we often forget to give them what we have. My father taught me disciple, fortitude and never to accept No. I do not want to choose for my children but I want to hold them to the standard they claim they care about. “

There were more lessons for parents in the audience. Agassi recollected he tried to address any misunderstanding his father might have with him, after his autobiography was published. His father responded on phone: “I don’t care, I am too old to care what people think about me. But I would change one thing…I would not let you play tennis. I asked why not? So he said it would be Baseball or Golf. I asked why. Because you can play longer and make more money, he said,” Agassi recounts. The audience goes into sheepish laughter. There were too many parents here who wanted their kids to do exactly what they planned.

Candidly enough Agassi says the highest point of his life was when Stefanie Graf said “yes” to marriage, as Agassi admits to have chased her down relentlessly. “She was the hardest to win…when Steffi Graf says yes, it’s as close to arriving.”

He explained how marrying someone who was better than him, helped. If you lose, you don’t have to explain what you’re feeling; she (Graf) knows it. On the good days, it’s the same. The pride is felt.

Agassi now talks about the journey of life.

“When your company is growing, what is most pleasing? The first billion (dollars) or 10 billion? No. I assure you the best part of being with a great company is being able to work, push yourself individually daily, and engage in the participation. Failure and success are an illusion. Failure is not an event, it is the interpretation of an event.”

Tennis, Agassi adds, is a very lonely sport. Worse than Boxing, he says. “It’s like someone taking a bunch of oranges in a pillow and pounding you. You feel it will not hurt but the wounds are there. Your opponent does need to be good… just better than you on that day.

He ends the conversation, talking about another legend. Roger Federer. “I cannot believe how easy he (Federer) makes it look. It almost pisses me off that he just makes it look so easy. He could beat the best from the back of the court. He had Plan A, B, C, D. And he never usually got to a Plan C or D. Occasionally he’d go to Plan B. But he’s also dealing with two other guys that you can argue are at the top of the history of our sport, with (Novak) Djokovic and (Rafael) Nadal. Everyone should be grateful that they have been able to watch this generation of greats.”

So ends Agassi’s conversation on the journey of life and where it can take people. Some paths took him north but a lot which led him south. But as with his game, his responses were sharp, straight and genuine, like shots ringing out of his racket from the baseline.  Find your path, give it your best and engage in it every day. That’s what matters, he tells the audience. I leave the open arena happy, almost like having watched a match of old.

Agassi did not shock or disappoint. He wowed.

13,223
Thank you for your comment, we value your opinion and the time you took to write to us!

Tweets by @forbesindia
Next
Let's find the grasslands first, not the cheetah