Women are Powering Their Way Up in Society

The first generation of highly educated (IIT, IIM) Indian women leaders have risen to the top of the power pyramid

As the cliché goes, whatever you say about India, the opposite may also be true. And so it seems when it comes to women and their rise to the top. Women’s empowerment is an agenda that’s barely begun to be addressed in this country. However, we also have the opposite phenomenon of electing strong women to positions of power—from Indira Gandhi to Sonia Gandhi to state-level politicians such as Mayawati, J Jayalalithaa and Mamata Banerjee—to name just a few. 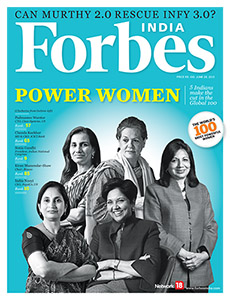 India Inc has less to be satisfied about. Corporate boards have less than 7 percent women, according to GMI Ratings’ Women on Boards Survey 2013, which sampled 89 Indian companies with a market cap of over $1 billion. This is marginally lower than the percentage in other developing countries. The survey says that half the boards have at least one woman director. That’s not enough diversity, though. And the gender scorecard could look worse once we get to companies lower down the list.

However, there is a qualitative change as we start looking at the top—women who have made it to the Forbes list of most powerful women. Here we see five Indian women in the Top 100—four from the corporate world and one form politics. Two of them are Indians now settled in America but remain comfortable in their Indian identities. The stories of Indra Nooyi of PepsiCo and Padmasree Warrior, CTO of Cisco Systems, not only serve as a huge inspiration for women around the world, but also tell us that women do not need to sacrifice their personalities or authenticity to play in a world dominated by men.

Back home, just as we were getting ready to wrap up the edition now in your hands, the board of Infosys surprised us all by recalling NR Narayana Murthy to rescue the company he founded. Infy has lost its way over the last few years, especially in strategy execution. We asked five eminent Infy watchers what went wrong with the company and whether Murthy, in his second coming, can make a difference. The answer was yes. The consensus seems to be that Infy dropped the ball sometime during its leadership transition. Murthy has to help Infy pick it up again.

Meanwhile, there is a leadership change at Forbes India as well. I am happy to start with the good news that Forbes India has won another award—this time from IE Business School in Spain, for Economic Journalism in Asia. Shishir Prasad, Dinesh Narayanan and Pravin Palande’s article, ‘BRIC Countries Hit a Wall’, has been adjudged the Best Journalistic Work. Congratulations!