The director-producer says he’s cutting down on non-essentials, as he now wants to focus on his own films 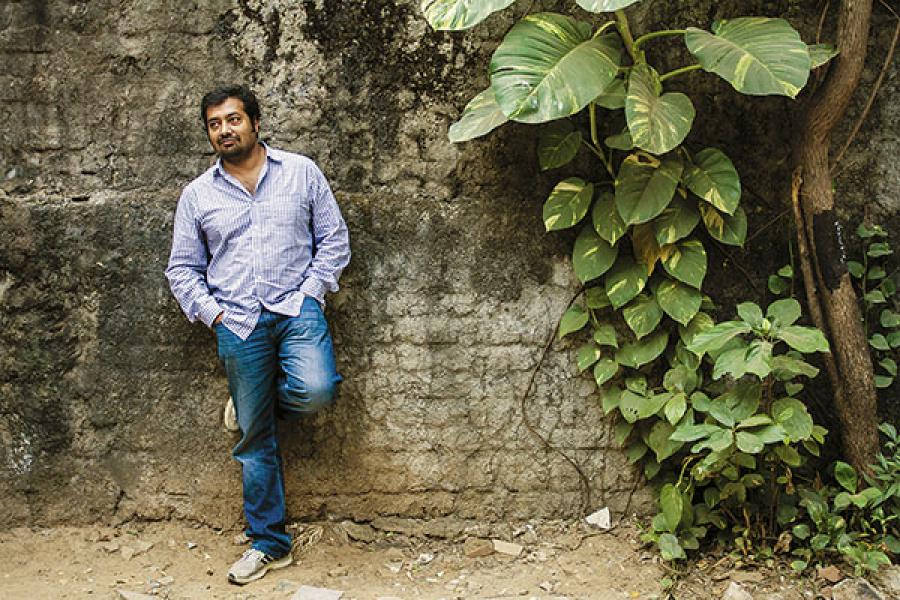 Image: Manoj Patil for Forbes India
"I want to focus on my own films"

“I just can’t work anymore. I have no time,” exclaims Anurag Kashyap as he walks into his Yari Road office in Mumbai on a lazy Sunday afternoon. I ask him how long can he spare for the interview. “Honestly, I just have three minutes for you,” he says with a chuckle. For a man who did almost everything one can possibly do in showbiz (direction, production, screenwriting, acting) in the last one year, time is a luxury. Does he want to settle down now?

I’m JUST going to focus on direction. I’ve got 10 scripts ready. I want to turn all my scripts into films in the next five years. The known ones are Ugly, Bombay Velvet and Doga. I finish Ugly in January and start shooting Bombay Velvet [a film on Mumbai’s jazz musicians of the 1960s] in June. Pre-production has already started. After that, there are two films which I’ll make back-to-back in North India: One unnamed project with Mr Bachchan and the other with Manoj Bajpai. This will happen while pre-production for Doga is on. So, between every two big films, I’ll make my small films.

And I’m not going to do any more NGO-filmmaking [gratis for friends]. That job has been passed on to Vasan [Bala] and Shlok [Sharma]. And Guneet [Monga] is running Sikhya Entertainment [a production house, an offshoot of Anurag Kashyap Films]. She’s going to produce three films every year. We did a little too much last year. And it all happened because suddenly sab kuch ek saath ho raha tha [everything was happening simultaneously]. There were two parts of Gangs of Wasseypur, then Aiyyaa and Luv Shuv Tey Chicken Khurana. In Chittagong, I didn’t do much. I believed in the film and my association with it was only to get it released. I do these kinds of things a lot. But now I am trying to cut down.

I want to focus on my own films. I’m cutting off from people. I’ve changed my phone numbers. My first passion was to make films. I enjoy the process of directing films the most. It is beautiful. And I want to do just that.

ZERO ACTING; SELECTIVE WRITING
I won’t be acting anymore. Whatever has happened so far was also very reluctantly. I had the time then. And somebody was a friend. I did things that nobody was willing to do. Like nobody wanted to play an abusive father in I Am. So, I told Onir [the director] that you look for people till the last day. If you don’t find anyone, I’ll come. And he told me on the last day, “Please come.” I didn’t act for money. I hate acting. Today, even if someone comes and tells me “koi nahi mila” [there’s no one], I won’t do [it]. Ab nahi karna mujhe [I don’t want to do it anymore]. Because there are many people who take those chances now.

I’ll write only for myself. And for people with whom there’s absolute trust and understanding, like Reema Kagti, Zoya Akhtar, Vikramaditya Motwane and other people within the group. I wrote the dialogue for Talaash. I’ve written for Lootera [Motwane’s next film]. I will only come in at a point when they have done all their homework. Then there’s to-and-fro. There’s minimal involvement. They will use me largely as a bouncing board. I’m not a person who’s hankering after credits. I just have to know that what I’m doing is amounting to something good.

DELEGATION IS THE WAY
I’ve set up a company now; there’s Sikhya, there’s Phantom [Films]; there are lot of people to look after all the other things. I know I cannot give that kind of attention and focus to a project which is not my own.

I want my name to be taken off the company. If Guneet runs the company, it’s hers. She is not my employee. She is an equal partner and the actual owner. I stay in the background while she is the boss. She’s completely spot-on. In the first year, I introduced her to this world and then left her alone. And she’s just taken it beyond my understanding to what has now become a model. The system is set.

I’ve delegated almost everything now. I like people doing their own things. Only the reading of scripts is still left with me. But now Vikramaditya Motwane reads all the scripts and is a big support. He also has the right to say ‘yes’. It’s a democratic setup.

In the next two years, you’ll see us dabbling in TV also. I’d stick to the creative side. I will set the mood and have a team in place. I cannot possibly direct a full series. I may probably do a pilot. Not more than that.

HOW THE CREATIVE EMPIRE WAS BUILT
It happened because nobody else was doing it and the mindset was only about blockbusters. In trying to do things economically, we ended up shooting in actual locations with hidden cameras. We worked with unknown people because they could blend into the crowd. We created our own things. Dev D was definitely a shot in the arm. But everything else happened in a very organic way. It was just because I wasn’t insecure with new talent. I always thought they were much better than me; I thought their films could be made. So I became an enabler. We slowly started becoming a bunch of people. I chose not to be surrounded by mediocrity because I wanted to grow more. I had to generate these people I wanted to run with. It didn’t happen overnight.

But now I have the space to make my own films. I don’t want to prove anything to anybody. I don’t want to be a pioneer. I don’t want to be a game-changer. I feel tired. I want to stop engaging with the media. My time with myself is at the film festivals. I stay away from the industry because we have managed to progress in our own little way. My only indulgence is table tennis. A lot of people in this office get hired because they play good TT.

CREATIVE BURNOUT?
I don’t burn out because of the people I work with. I’m always engaging with new ideas because of the talent I surround myself with. I compete with my own assistants. As long as that creative stimulus is there, there’s no scope for a burnout.

(As told to Sohini Mitter)