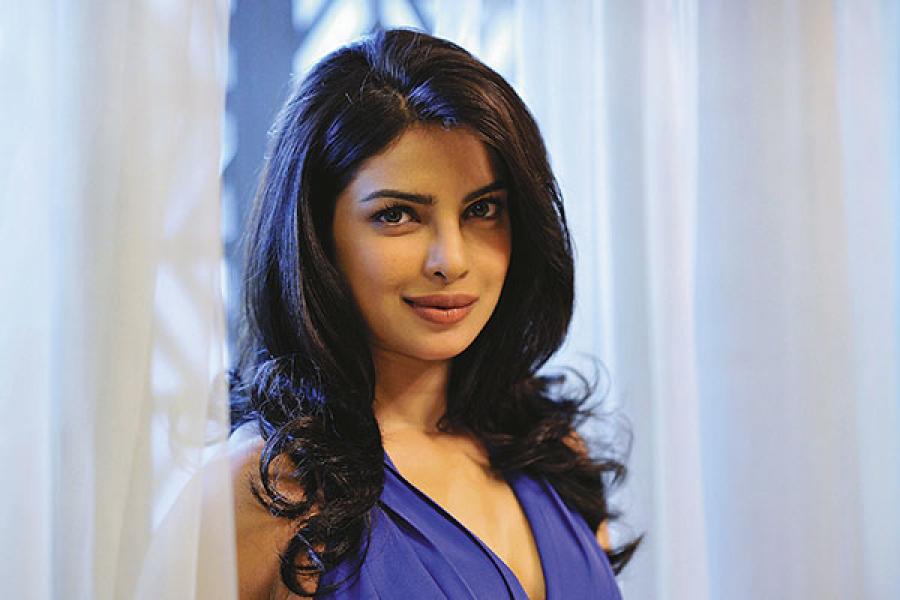 Image: Gareth Cattermole / Getty Images
“I am glad to be the first. I like to think I broke a few barriers”

In some ways, Priyanka Chopra rewrote Bollywood history in September 2012. She became the first Indian actor to make the big leap into the very competitive world of pop music. She signed a global recording agreement with Vivendi-subsidiary Universal Music Group for a new album. Her debut single, released in Los Angeles, was the NFL Network anthem that notched up a triple-platinum, selling 130,000 copies in the first week.

“A girl can be in a super-comfort zone and do well in Bollywood. She just has to make sure she looks good,” she says. Yet, Chopra has chosen to do more. She has often gone against conventional wisdom with roles that won her critical acclaim. Here she talks about what motivates her to take these risks.

I have always been someone who wants to try out new things. I like to be different. I was too shy to do singing parts in my films, even though producers suggested it. So when Universal Music Group and DesiHits approached me, I was sceptical, but then I thought, why not try it? I started going to the studios. Slowly Interscope [Records] came onboard and then [Moroccan music executive] RedOne and today, it’s become such a big project.

It took a long time—almost a year-and-a-half—and a lot of hard work because I am not a professional music artiste. You can’t just go into the studio and start singing. I had to train for it. Lyrically and music-wise, the songs had to be a reflection of me, and this took time. ‘In my City’ was made by [Black Eyed Peas artiste] will.i.am. He had the song and suggested I take a stab at singing it. I really liked it and decided to go for it.

Breaking Barriers
Creativity does not have to be confined to one sphere. Not too many have taken this path in India. I am glad to be the first. I like to think I broke a few barriers. Though it is hard. Music is another industry completely. Not everyone gets the kind of support I have got.

What worked for the foreign studios is that I am already an A-list Indian actor. This helps them open up a market for their music in India, which has been monopolised by Bollywood. If you take a leading actor and launch them as a musician, you can take that audience with you.

The single has only just been launched outside the US; we will now start promoting it. It is doing very well [in the US]—on the top three on the EDM [electronic dance music] charts, in the top 100 on iTunes.

In the music business, it’s a long process. The full album comes out after many months. People have to hear [the single] first and then it takes a few months. It’s the same with any artiste, whether it is Lady Gaga or Rihanna. They come out with a single first, then another single and then another…and finally the entire album.

We are still trying to figure what comes next because it is still new for us. But it has to be organic.

Straddling Two Worlds
I am keen on doing both. I want to sing and act. This often means there is no time left for myself. When I was working for the album, I finished four films. It means you sleep on flights and eat lunch and dinner in cars. But that’s a price you have to pay if you want to handle two careers. You can’t ask for time. But I can handle it. I can multi-task. I am greedy. I love my job. I am not going to give it up for anything in the world.

It is true that heroines have a limited shelf-life in India compared to heroes.

It’s a patriarchal society and there is no use sitting and crying about it. We have married actresses like Ash, Sridevi, Madhuri and now Kareena who are challenging this. Your longevity depends on people’s desire to watch you.

My music is simply an extension of my creativity. It has nothing to do with any career plan—or insurance against the future. I don’t plan so much.

Fear of the Unknown
If you simply live in the normalcy and placidity of everyday life, where is the excitement?

As an actress, I can be in a super-comfort zone. I could just do five songs and 20 scenes in a movie with a big hero. I don’t have to do anything…I just have to look beautiful. Make sure I look good, my outfits are cool and that I have these scenes. The film will anyways be a hit because of the hero. I am saying, it is possible to do this AND that. Today, you can add to a project. It’s exciting when you do a film where people say, ‘No one else could have done that part.’ That’s when you win.

Did I worry, when I was going outside the zone, with the singing? Of course I did. What if people hate my voice? What if they hate the song or the album? But you can’t sit down thinking these thoughts and let them get you down.

When I did Barfi, people told me that I would lose my glamorous image. But that’s not how it turned out. I am pushing the limits and that’s important.

(As told to Cuckoo Paul)