Cricket 2020: Life in a bio-bubble, by Wasim Jaffer 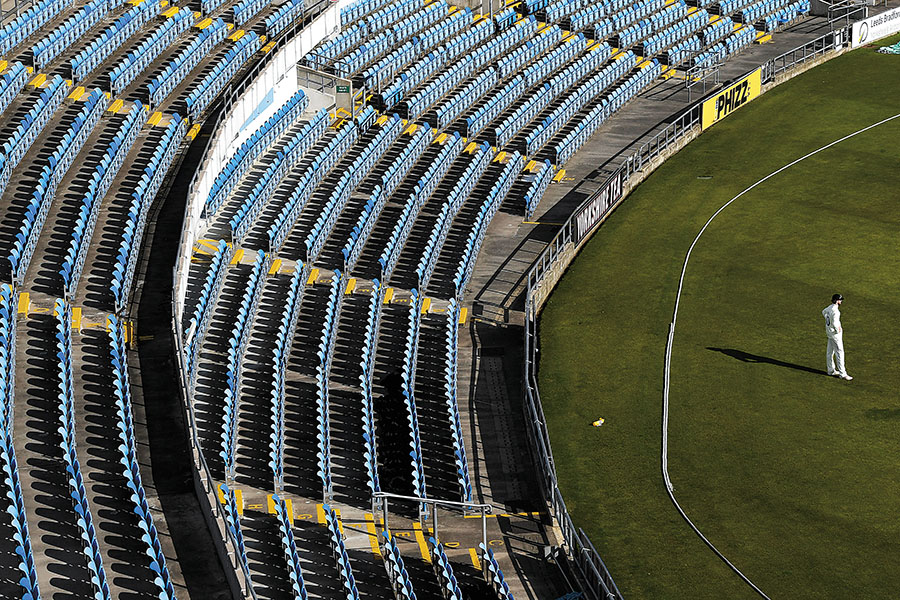 Cricket, like many other sports, has been played in empty stadiums, without spectators, in 2020. Although this has been initially strange for the players, who have missed the buzz of the crowds, they eventually got accustomed to the new reality
Image: George Wood / Getty Images

The biggest adrenaline rush for any sportsperson is to own the stage with the electrifying atmosphere in the stadium adding to the occasion. It was, therefore, frustrating, not just as a former cricketer and now batting coach, but even as a layman who likes going out, to be stuck indoors because of the lockdown. One didn’t know how long this would go on for, before normalcy returned. We are in January—nine months after the lockdown was first imposed—and things are not normal even now. Uncertainty and uneasiness still linger in the air.

Given the precarious situation globally, it was only natural that sporting action came to a halt in early 2020. Wimbledon was cancelled, while the French Open was pushed ahead. The Indian Premier League (IPL), scheduled to be played in April-May, also had to be postponed. And rightly so. All that one could do was wait while the government monitored the ongoing crisis closely.

A glimmer of hope ensued when the Board of Control for Cricket in India (BCCI) decided to organise the T20 tournament in the UAE in September-November while ensuring that everyone associated with it stays in a bio-secure bubble. I wasn’t apprehensive about travelling for the IPL one bit. In fact, I was happy… at least there was some cricketing action to look forward to. However, it would be the first time we’d stay in a bio-secure environment—under strict watch and restricted movement. We did not know what to expect.

We stayed like that for two-and-a-half months. And realised it affects you mentally if you are stuck there for too long. You could not travel or meet people outside. If you wanted to bring over your family, they had to be quarantined first before they could be allowed into the bubble. In the hotel, too, you just couldn’t walk anywhere. Such things took a toll after a while.

When not involved with cricket or practice, there wasn’t much one could do to stay entertained in the hotel. You had to rely on watching movies on television, spending time on the phone or working out in the gym. The good part was that it helped in team bonding. A lot of players spent time together in the team room and the atmosphere became a lot casual and jovial. Many preferred to relax with their close friends in their respective rooms. Living in a bio-secure bubble also allowed the younger players to stay away from distractions. One can easily get distracted in a place like Dubai—with lots of malls—if you are allowed to go everywhere. In a way, it was a blessing in disguise. We were together for close to three months and got to know each other better than we would have otherwise.

Though the IPL was played sans spectators in the stadiums for the first time, we took comfort from the fact that we were back to playing cricket. Yes, it did feel strange because the buzz of the crowds brings an edge to the game. But we had to accept that certain things won’t happen the way they used to because of Covid-19. We had to get used to the novelty of the ‘new world’. The consolation was that we were playing, not sitting at home. And we had to sacrifice something for that… it’s also about the safety of the players and the people, so why not?

The successful completion of the tournament meant that it was worth travelling and staying there despite the fear of the virus lurking in our minds. After all, the IPL is not just a tournament—there’s so much that goes into domestic cricket and Indian cricket because of it. The players are paid and looked after well, so many people are associated with the tournament and employed because of it… their wages come out of the IPL.

The players dealt with the unprecedented circumstances normally. It didn’t affect them too much on the ground. The DJs tried to recreate some things—such as the noise from the crowd, music etc—when the matches were being played. Obviously, it was not the same. But the players knew at the back of their minds that this is the reality staring us in the immediate future.

Thankfully, spectators are back in stadiums now, albeit in fewer numbers. New Zealand played against Pakistan and the India-Australia series too has seen a sizeable number of people coming to watch the game. Hopefully, as things improve, one will see stadiums packed to capacity. At the same time, we’ve got to be careful because a lot of people can be affected easily and simultaneously. But life has to move on… now with safety restrictions.

The pandemic and the lockdowns did not change me a lot as a person, but made me realise that we took several things for granted. Meeting people for dinner, going to a neighbour’s house, watching movies in the theatre… we’ve got to think twice before we do such ‘normal’ things now. The pandemic has scared us so much that we’re apprehensive even about meeting someone who’s ill. It’s shown how life can change suddenly with just a virus… something that you can’t even see.

Our perspective has invariably altered since the outbreak of the coronavirus and the hardships that people had to endure. One has to be thankful to the Almighty for all the comforts and privileges that He has blessed us with. In normal circumstances, we aren’t thankful or appreciative enough. Hopefully, once things are back to normal, we will value routine things—that we do without thinking twice—even more. We’ve learnt a huge lesson. A small virus can make you stay away from people… even the near and dear ones. And that was a bit shocking to me.