Lessons in public health we cannot afford to forget quickly 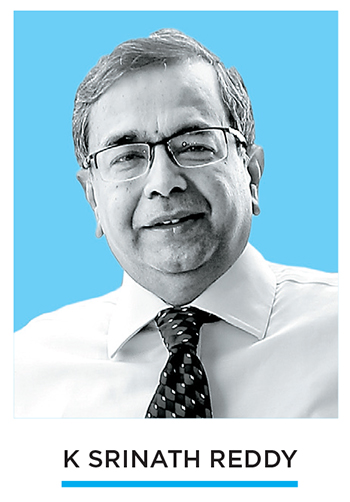 When the Covid-19 virus landed in India in end-January 2020, accompanying a group of students arriving in Kerala from Wuhan, the world had no inkling that the virus was on a prolonged mission of global conquest. Several parts of the world are reeling from a resurgent virus, even at year-end, and the global economy is on the mat struggling to beat the referee’s count sounded by the International Monetary Fund.

India’s case count crossed 10 million on December 18, becoming second only to the USA. However, it must be recognised that India has a large population. Any international comparison must account for differences in population size. India’s case and death counts per million population fall below 13 other countries whose case count crossed one million by December. Indeed, their combined population count falls below India’s, yet their added case and death counts exceed India’s reported figures. Is this because of undercounting in India? It is likely that cases are undercounted due to low testing rates early on. Even later, the variable mix of nucleic acid tests and rapid antigen tests would have given several false negative results, since the latter have lower sensitivity. The criteria for testing too differed across time periods and many asymptomatic persons may not have been tested. At the population level, viral exposure rates can be compared only through antibody tests in random samples of the whole population to capture both symptomatic and asymptomatic infections. Despite some false positive and false negative results there too, such surveys offer the best possible estimate of infection in any population. Unfortunately, many countries do not conduct such surveys, busy as they are in fighting to control the active case numbers. Even in India, the last nationwide survey of anti-Corona antibodies was conducted only in August 2020, yielding a prevalence rate close to 7 percent in the general population at that time. Deaths, on the other hand, are easier to ascertain though the assignment of cause may be problematic. While even within-hospital deaths can be misclassified, especially when there are pre-existing health disorders which increase the risk of severe Covid-19, out-of-hospital deaths are difficult to classify as diagnostic tests would be unavailable in most. However, the noise to signal ratio is likely to be more constant for the death count than for the case count. Therefore, a declining trend in reported cases of Covid-19 deaths is a reliable indicator of the course of the pandemic, even if we quibble over the actual number of deaths. However, there is no room for complacency. Our under-resourced health system has been challenged and stretched. Concentrated attention to Covid-19 has diverted health services from maternal and child health as well as non-communicable diseases and mental health, which are the highest contributors to our disease burden. Even as the epidemic seems to abate in spread and severity by the end of 2020, the task of vaccinating the large population will demand the attention and energy of the health system in 2021. 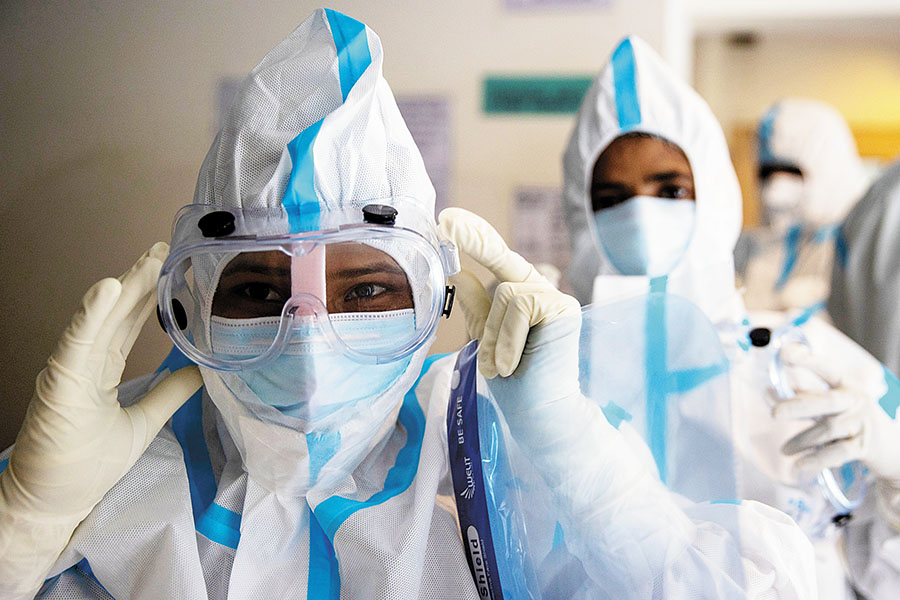 India has severe shortages of the health workforce. The WHO recommends 44.5 workers per 10,000 people; at present, we have half that number. Image: Shutterstock India has severe shortages of the health workforce, across several categories from specialist and basic doctors to nurses and allied health professionals. In 2016, WHO recommended that a country must have 44.5 health workers per 10,000 population to meet the Sustainable Development Goals and deliver Universal Health Coverage (UHC). Currently, we have half that number. Even those available are severely mal-distributed, between states and across the urban-rural divide. Technology-enabled community health workers, nurses and other frontline care providers can perform many functions in primary care, liberating us from an entirely doctor-dependant model. However, more doctors will be needed, including those trained in family medicine. Recently-initiated reforms in medical, nursing and allied health professional education hold the promise of improving the scale and standards of the health workforce. Upgraded district hospitals should become the cradles for new colleges of medical, nursing and allied health professional education. Public health expertise is deficient in central and state health systems and the recommendation of the National Health Policy of 2017 that all states must establish a Public Health Management cadre has been implemented only in a couple of states. Non-allopathic systems of healthcare (AYUSH) need to be respectfully integrated into the health system, especially for health promotion and alternative modalities of clinical care, but should not be hastily transformed into ill-trained allopaths. The foremost lesson the pandemic teaches is that a health system that is insufficiently resourced and suboptimal in performance in a steady state cannot create a strong and swift surge response when challenged by a public health emergency. Even if it mobilises resources on a war footing, there is an opportunity cost to pay in terms of many other health services suffering neglect. Apart from scaling up of the health workforce, infrastructure, equipment and management systems of primary, secondary and tertiary healthcare facilities must be strengthened and efficient bidirectional referral and follow-up systems must be developed to link them. Neglected elements of the health system like urban primary healthcare and district hospitals must be afforded priority attention, as they have time and again been found to be deficient and Covid-19 too has highlighted that problem. Public, private and voluntary health care providers must be brought together under a well-designed framework of UHC. A strengthened public sector must be the centrepiece of the new health system architecture, with enhanced access and public accountability. The other sectors should play a complementary role with clearly defined deliverables attuned to the UHC mandate. Health cannot be divorced from key biological and social determinants like nutrition and education. Recently released data on indicators of child nutrition from the National Family Health Survey (NFHS-5) are a cause for great concern at the high stunting rates among pre-school children. Decline in these rates, evident over the previous surveys, has stalled or worsened after 2015 in many states. Coupled with the prolonged school closures affecting older children, with adverse impact extending from loss of learning and socialisation to loss of mid-day meals, the physical and mental health of a whole generation may be impacted. Distance education opened up the inequities of the digital divide to our clear view, as children from poor families had limited or no access. If a low-income family did possess a smartphone, it was used by the boy and the girl child fell farther behind. An efficient and equitable health system cannot be developed without adequate public financing. The commitment to deliver universal health coverage by 2030 is contingent on fulfilling the promise of raising the public funding on health to at least 2.5 percent of the GDP from the present 1.2 percent by 2025 as promised by the government, or even earlier as urged by public health experts. About 70 percent of this has to be allocated to primary healthcare.  This has to be a commitment of both central and state budgets henceforth. Out of pocket health expenditure has been a financial burden for many, impoverishing 7 percent of the population any year. Though it has decreased over the years to 60 percent, it is still above the 15-20 percent level considered by the World Bank and WHO to be compatible with achievement of UHC. Covid-19 has also brought us the lesson that self-reliance in key areas is vital even in the era of globalisation. Disruption of global supply chains led to shortages in personal protection equipment and viral testing kits, while concerns about unavailability of active pharmaceutical ingredients for domestic drug manufacture and ventilators for intensive care consumed policymaker mindspace. The resolve to develop domestic capacity in many areas, through the Atma Nirbhar programme, is welcome. Largescale production of generic drugs, their pooled public procurement and free distribution of essential drugs in public sector institutions will have an early and sizeable impact on reducing out-of-pocket health expenditure. Covid-19 has also reminded us that the role of the community needs to be recognised and respected. Whether it is prompt recognition and reporting of symptoms, helping in contact tracing and providing social support to affected families, adherence to public health advisories, combating fear and stigma and informed acceptance of vaccines, the community’s role was initially underappreciated in a top-driven bureaucratic approach. In future, community engagement has to start early and stay sustained in any public health initiative. Attention to public health and health system needs has been fleeting in the past, fading fast when the emergency ends. When the next challenge arises, an alarmed reaction results in a hastily organised response. Covid-19 stretched itself over a year and stayed in the headlines to remind us that ad-hoc responses are not an option for the future. We need to create systems that can anticipate, avert, attenuate and abbreviate any health threat while dependably delivering all other needed health services with efficiency equity, continuity and commitment.  ● The author, a cardiologist and epidemiologist, is President of the Public Health Foundation of India. He is the author of Make Health in India: Reaching a Billion Plus

Tweets by @forbesindia
True diversity comes from within
How we survived: SectorQube pivots but remains 'smart'