For schools to be effective the community must be invested in them. Abhishek Choudhary and Saransh Vaswani, both 25, bring enthusiasm to the cause 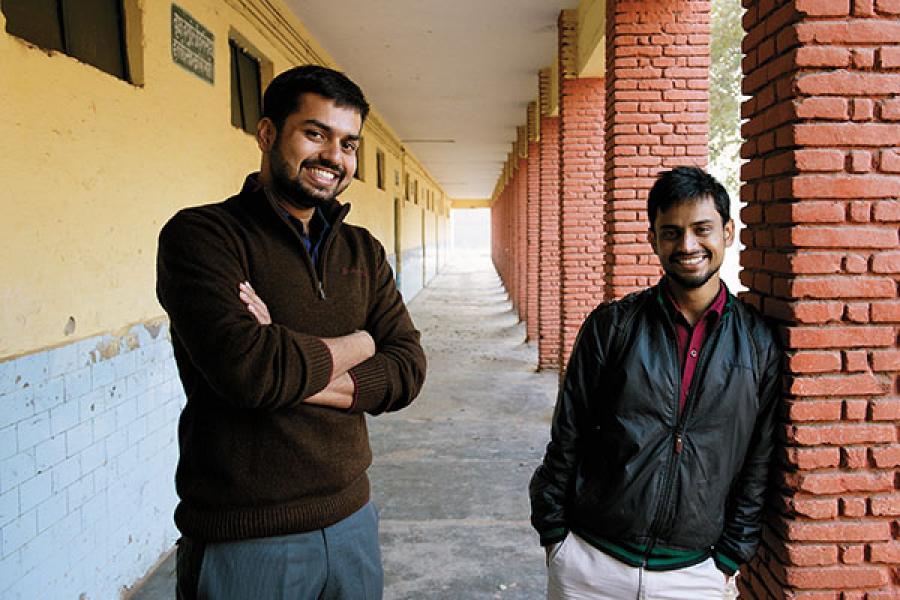 Abhishek Choudhary and Saransh Vaswani are both passionate about theatre. They had each moved to Delhi for love of the stage—Choudhary from Jamshedpur, Vaswani from Jhansi—where they were fellow actors and directors, in Hansraj College. Today, they are still collaborating. But they don’t have much time for the stage. Instead, they are committed to another platform, their startup Saajha.

And to another love: Education.

The premise of Saajha can be traced to the Right to Education (RTE) Act (2009), which mandates the creation of school management committees (SMC) in every public school. Each SMC comprises the school principal, a teacher, parents, a local ward councillor and an educationist. In Delhi alone, 93 percent of schools had not formed SMCs as of January 2013, according to data from the Ministry of Human Resource Development.

Choudhary and Vaswani became aware of this gap in 2010, during their Piramal Foundation Gandhi Fellowships, when they studied education in rural India.

Vaswani was teaching a boy, Vinod, at Rabriyawas village in Rajasthan. Though he was in Class 5, Vinod couldn’t even recognise the Devanagari alphabet. Vaswani returned to Rajasthan after a year to find that Vinod had left school to work at his father’s restaurant in Gurgaon. “The school had teachers,” Vaswani says, “but only one out of four was present. Nobody questioned that teachers were not present or that the kid was likely to drop out. This is when we understood that it is the collaboration of the school and the community which is of utmost importance towards the child and his learning.”

The concept for Saajha came only when Vaswani visited Ahmedabad-based Sewa (a grassroots social movement run by and for women through several coalitions) on an Ashoka University Young India Fellowship. Having considered that model, “Saajha identified empowerment of the community, learning outcome and a coalition of SMCs as its core focus,” says Ashish Dhawan, founder and chief executive of Central Square Foundation, which invested Rs 32 lakh as seed fund in Saajha in July 2013, after which it was incubated by Pratham, India’s largest NGO in education. (The venture has also received $90,000 from American NGO Echoing Green.)

Education experts and funding bodies acknowledge that SMCs in government schools are crippled by a lack of accountability, initiative and vision. Change is hampered not least by the schools themselves. Saajha’s initial attempts to meet school managements were usually rebuffed, Choudhary says. “We were often told aage badho [be on your way] by senior teachers. We don’t want to work with SMCs, they said.” In about 80 percent of cases, it took about six to eight weeks to get their first meeting with the principal.

Though almost without exception they were dealing with much older people, their youth hasn’t been a handicap. In fact, Vaswani says with mischievous glee, “We’ve played the age card to our advantage. Sometimes headmasters have given us packed lunch tiffins!”

Educationists have also learned to take the duo’s efforts seriously. Saajha strengthens functional SMCs by creating modules called Saajha Vishleshan Sabhas (learning audits). Each child’s reading ability is assessed by teachers and parents. The data then dictates steps to ensure the child is at age-appropriate skill levels. Saajha representatives sit in on or discuss the outcome for most SMC meetings.

At Bharola School in North Delhi, a majority of parents, uneducated themselves, could not evaluate their children’s report cards. Saajha facilitators, with SMC teachers, organised a workshop to teach parents to read report cards and analyse their child’s learning ability.

In an East Delhi school, parents once sat on the floor while the headmaster sat on a chair at meetings. Choudhary and Vaswani changed things by playing a clip from the film Lagaan, which showed a person from a low caste being initiated into a cricket team. (Their love of entertainment often comes to their aid. Their acting and directorial skills aid workshops that use role-play to make points.)

Saajha has 10 staffers, and operates in 58 of Delhi’s 1,800-odd government primary schools. It has created at least 40 ‘micro-impacts’ in 27 schools. Saajha aims to create a coalition of SMCs in 1,000 Delhi government schools by 2018, and, by 2025, expand to eight states and 200 districts across India. They will expand themselves, but also collaborate with other NGOs. “We plan to use this model in other states and will network with Pratham and other organisations to expand,” says Choudhary. 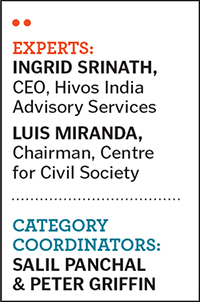 Aditya Natraj of Kaivalya Education Foundation, says, “There is a high ability to replicate Saajha’s model across other states through pilot projects, as the RTE Act is similar across states.” The work requires energy, drive, and sacrifice. But, Choudhary says, “What I am doing today, I know I cannot do at 35-40. I definitely have the time to earn more money later. I cycle, use the metro and don’t need to style up to get to office.”

Do they not feel a pang when they see contemporaries living far easier lives? Isn’t it tempting to opt for a job and a regular salary?

Choudhary laughs and answers for both: “Change is sexier than sex.”
Here is the full list of 30 Under 30 for 2015 and its methodology