Ruchika Sachdeva, 27, is a bold, young face of Indian fashion. And she hasn't learnt all her skills at a design institute 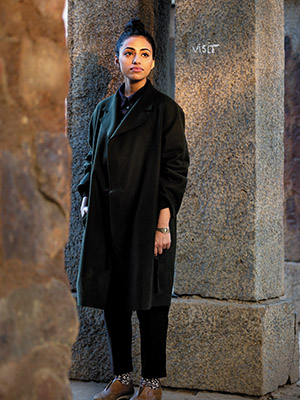 You cannot become a good fashion designer by just designing good clothes. Life skills, in conjunction with good fashion design sense, are just as important,” says Ruchika Sachdeva. She should know. Today, at 27, Sachdeva is the founder and creative director of Bodice, her label that takes inspiration from menswear clothing and history, and translates them into androgynous garments with quixotic elements. But it wasn’t just design school that brought her to this point.

With a notion to “do something creative”, Sachdeva had enrolled herself at Pearl Academy, a design institute in Delhi. However, after the first year, she felt her growth was restricted. That was when she applied to the London College of Fashion. And life, as she knew it, changed.

The vagaries of student life in London brought out the best in her. At 20, she wanted to think like an adult while possessing the energy and enthusiasm of a child. Along with her studies, Sachdeva started sourcing fabrics from second-hand stores and making her own clothes by altering and mixing them up. So impressed were her friends with her outfits that they started placing orders. This signalled the beginning of her entrepreneurship. (Today, she employs 14 people in her sampling and production team, based out of her flagship store in Delhi’s Hauz Khas Village.)

After her return from London in 2010, Sachdeva started finding her feet in the Indian fashion scene, to begin with as the Gen Next designer at Lakme Fashion Week. At the same time, she also studied her market closely and identified the complete absence of premium everyday clothing; there was a surfeit of over-the-top occasion wear that could not be worn more than once. What was clearly missing was premium daily wear that could easily transition into formal evening wear, clothing one would want to don several times over.

With that in mind, in 2011, she launched Bodice and showcased the Autumn/Winter 2011 collection at Lakme Fashion Week. In the same year, she was nominated for Best Debut Collection at the Marie Claire Awards.

Bodice’s unique selling point is derived from a fine mix of modern tailoring and pattern-making skills, integrated with androgynous silhouettes. While designing garments in a muted colour palette, Sachdeva is extremely particular about finishing and tailoring. Her clothes consist of transitional wardrobe staples with character, which are recognisable by their unique, minimal aesthetic, quality construction and versatility. Her garments are usually over-sized or easy fit, steering away from body-hugging silhouettes. Her focus has always been on editing, rather than adding: “Just enough but not too much.”

Nonita Kalra, who served as the editor-in-chief of Elle India for 13 years, says, “Ruchika Sachdeva’s fashion sensibility is the best example of a young breed of designers I like to qualify as ‘India modern’. This new generation gives the indigenous a futuristic momentum. By making androgyny her key reference point, Ruchika’s ironic take on the classic puts her firmly in the front of class.”

Bandana Tewari, fashion features director at Vogue India, holds Sachdeva in high regard. “What appealed to me most about Ruchika Sachdeva is her unflinching design direction. She has a very modern approach to clothing women, which seems to address the minds of the wearer as much as the bodies,” she says. “Her neutral colour palette, the superb finish and sharp cuts and cowls in her garments are fair indications that she is designing for thinking women who believe in the ideals of ‘slow fashion’. This sets her apart from the majority of young designers who cater to India’s robust demand for all things bright, embellished, decorative and, dare I say, exhausting and expendable.”

Not surprisingly, the mantelpiece is glittering with silver. Sachdeva won the Elle Style Award for Breakthrough Designer in 2012, the Grazia Award for Best Urban Collection in 2013 and the Vogue India Fashion Fund Award in 2014. The last award not only gave Sachdeva Rs 25 lakh to help grow her label, it also gave her a chance to design an exclusive collection for Van Heusen. She got access to prominent platforms in the industry, a sponsored solo show at Wills India Fashion Week, mentorship from Vogue, and a year-long mentorship with an industry professional.

“The significance of her design philosophy is all the more important as she is willing to go against the tide even if it means not appealing to the cry of the majority but to the quiet needs of the few,” adds Tewari.

And this, inevitably, led to a fair share of challenges. For instance, her label is still not accessible given a tough retail environment where the Indian buyer prefers high street mass fashion. “The boutique culture is still developing in India,” says Sachdeva. However, she is optimistic: She feels it is a great time to be in fashion, when the customer’s mindset is changing and people are more open to buying designer wear.

Apart from being a designer and a savvy businesswoman, Sachdeva is taking baby steps towards being a social entrepreneur: In 2014, she worked with local weavers in Varanasi for an ongoing project with Indelust, an ecommerce portal in collaboration with Loom to Luxury, which is funded by Nest (a New York based NGO). In 2012 she was involved with a collaborative project with Access Development Services (an NGO), funded by the CSR segment of Citi. This aims to improve the incomes of primary producers and artisans who work with appliqué, embroidery and handloom weaving in the handcraft clusters of Barmer, Rajasthan. The project targets 500 appliqué artisans (women) and 500 handloom weavers (men) in Chohtan village. 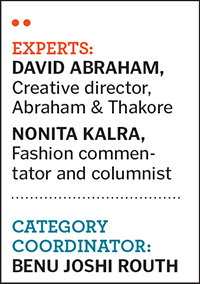 Her plate is full and she wouldn’t have it any other way. Sachdeva sees herself in a similar role for the next five years, which is establishing Bodice as the most comfortable name in premium everyday clothing boutique label. As for the next 10 years, she wants to reach a level where she works for eight months and travels for four. And, perhaps, engaged in a mentorship programme that uses her expertise.

Is there a specific dream, we ask? “I am very happy where I am. I am living the dream!” Life, clearly, has taught her well.