By taking the right quantum of risks and focusing on innovation and costs, Dalmia Bharat has emerged as one of the most efficient players in the Indian cement industry 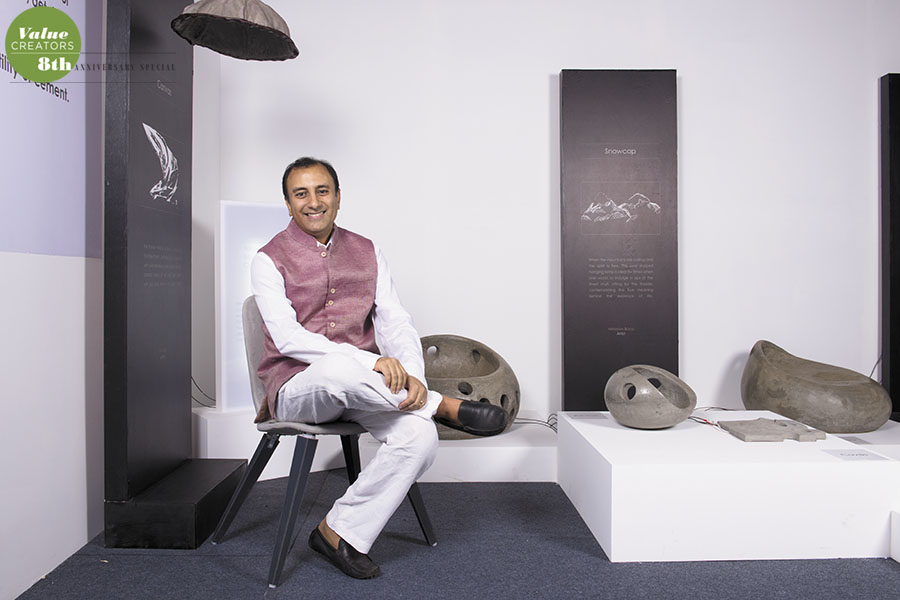 "How can you make cement sexy?" asked Puneet Yadu Dalmia of his management team in early 2016. This was a serious question. The managing director of Dalmia Bharat Ltd (DBL), India’s fourth-largest cement producer by capacity, wanted to make the ubiquitous commodity exciting and bring it closer to consumers. Over a year later, on April 28, the company—against the backdrop of early summer rains—held an exhibition at Bikaner House in Lutyen’s Delhi to unveil its latest brand, Craft Beton, for limited edition art pieces made from cement.

It was as much a celebration of art as of cement’s attributes—strength, adhesiveness and moulding capabilities. Table ware, chairs, sculptures, light shades and other artefacts were on display. “We invited four renowned designers, two of them from outside the country, to play around with cement and design household and functional art products,” says Sundeep Kumar, who handles corporate affairs for the company. These products signify a unique initiative by a cement company and are available for sale online.

But then, innovation is not unusual for DBL, the Delhi-based company which, through its subsidiaries, has an aggregate cement manufacturing capacity of 25 million tonnes spread across south and east India (including the northeast). It was the first company, way back in 1973, to make cement specifically for railway sleepers. Over the years, it came up with specialised cement for oil wells and air strips. It claims to be the greenest cement company in the world, boasting the lowest carbon footprint (net carbon-dioxide emission of 493 kg/tonne). As much as 80 percent of the cement it produces is blended either with slag (waste from steel plant) or fly ash (power plant waste). It will also become a water-positive company by 2020 and quadruple the use of renewable energy by 2030. 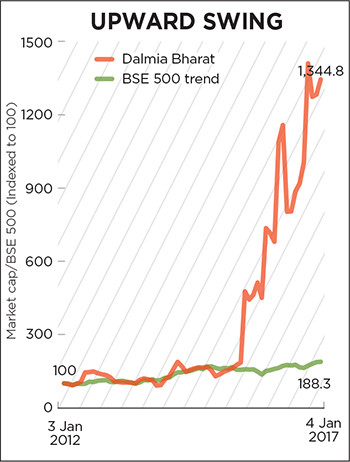 This focus on innovation and sustainability has helped DBL create strong value for its shareholders. Its market capitalisation rose to Rs 17,501 crore on March 31, 2017, at a compounded annual growth rate (CAGR) of 72 percent over the past five years. Significantly, this value creation coincided with a rapid pace of growth unleashed by Puneet, 44. Between FY06 and FY17 (9 months results annualised), the company’s capacity grew at a CAGR of 32 percent (20x), revenue by 31 percent (20x) and operating profit, or Ebidta, by 37 percent (30x). “The Dalmia group is a classic case of a visionary founder/family combined with the operational acumen of seasoned professionals who have full freedom in running the business. Over the past years, they have doubled their capacity via organic expansion, four acquisitions and at the same time continuously sweating assets,” says Sanjay Nayar, CEO of KKR India; the private equity (PE) firm had invested Rs 500 crore in Dalmia Cement Bharat—a subsidiary of DBL—in 2010 and exited recently with an enviable return of 3.6x.

But Puneet’s first stint in the family’s cement business, started by his grandfather Jaidayal Dalmia in 1939, ended with him in a state of shock. After completing his engineering (IIT Delhi) and MBA (a gold medallist from IIM Bangalore), the 27-year-old Puneet began working in the sales department of the company. In 2009, he presented a Rs 500-crore capacity expansion plan. “You do not have the credibility yet for me to bet Rs 500 crore on your plan.” his father, Chairman Yadu Hari Dalmia, told him. “I was more shocked than offended by the level of frankness in that statement,” Puneet tells Forbes India at his Barakhamba Road office. He was, instead, given Rs 2 crore by his father to prove himself as a businessman.

With cash in the bank and no idea where to start, Puneet reached out to his IIT friends. He soon co-founded jobsahead.com along with fellow IITian Alok Mittal (who now runs Indifi Technologies—a debt financing platform for small businesses). The jobs portal did well—it was, in fact, of a similar size to Naukri.com in 2004 when they sold it to Monster.com for Rs 40 crore. “When Naukri.com listed in 2007 at a valuation of Rs 4,000 crore, I learnt a crucial lesson: Never sell a fast-growing business, especially when you do not need money,” Puneet points out.

But he had achieved his purpose. After “proving” his entrepreneurial skills, Puneet, then 32, was back in the family business. He soon sent another proposal, this time questioning the company’s flawed capital allocation process. “People who allocated the capital were the people who received it,” Puneet remembers. This time, the family members agreed with him. A process was put in place where each business—cement, refractory and sugar—had to write a five-year business plan; based on those plans, capital was allocated. For the cement business, the Dalmiapuram (in Tamil Nadu) capacity was expanded from 1.2 million tonnes to 3.5 million tonnes. Around the time the expanded capacity came on stream, cement prices rose by 30 percent and the project payback took just two years. “We were lucky to expand at the right time,” says Puneet, whose credentials were cemented and he was emboldened to take the steps that created DBL as it stands today. 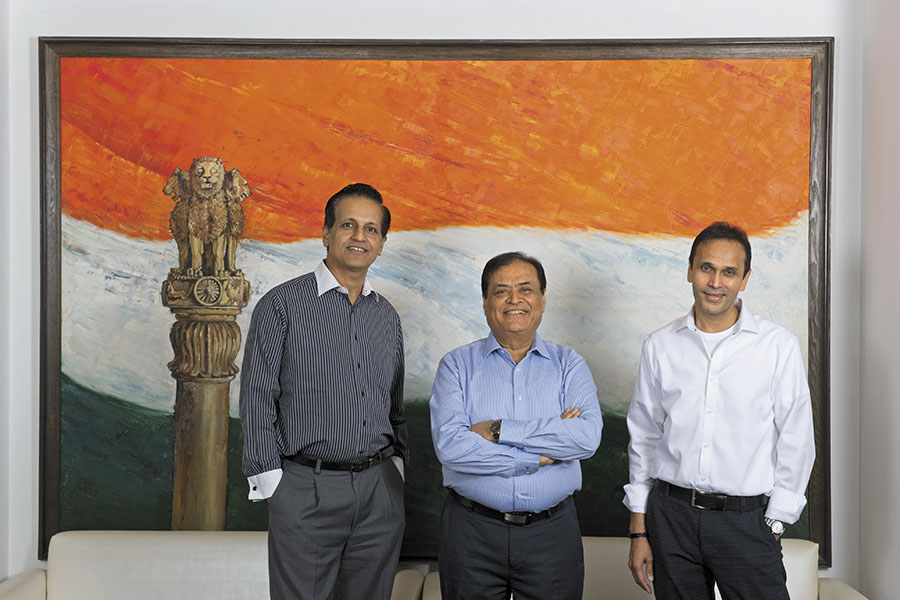 
After reforming capital allocation, he convinced the family members to step away from managing the business and brought in professionals. He also strengthened the board of directors considerably by bringing in credible independent directors. All this helped him broadbase the management. He also undertook corporate restructuring of the Dalmia Bharat Group which was into sugar, power, refractories and a few other smaller businesses apart from cement. The sugar and refractories business were hived off separately and DBL was left with the cement and power operations. His approach saw DBL grow in size and establish itself as one of the most efficient and profitable cement companies in the country.

DBL’s rapid growth is evident but what is not obvious is the judicious mix of well-timed organic growth and acquisitions. Between 2005-06 and 2010-11, the company added 7.8 million tonnes—all in South India—through greenfield and brownfield expansions. And it soon changed tack.

Prior to the 2008 global financial crisis, credit was easily available and most of the capacity expansion got green-lit. As much as 140 million tonnes of capacity was created between 2007-08 and 2009-10 in the country. By the end of that decade, cement prices fell due to over-supply. “In a boom, you grow organically and when there is blood on the street, you acquire capacity,” says Jayesh Doshi, group CFO & wholetime director, Dalmia Bharat Group. In fact, DBL cancelled orders for machinery meant to add about 10 million tonnes organically. Instead, Puneet began to create a war chest and turned to private equity to fund it.

In May 2010, KKR invested Rs 500 crore with an option to pump in another Rs 250 crore (this was not exercised). This money was used to acquire capacities in eastern India. DBL’s cement capacity rose from 9 million tonnes in 2010-11 to 25 million tonnes in 2014-15. “Our average cost of capacity addition per tonne, at $91, is far lower than the industry average of $140,” says Doshi. “This points to a very efficient capital allocation.”

Puneet, who had read the book Barbarians at the Gate: The Fall of RJR Nabisco (by investigative journalists Bryan Burrough and John Helyar), that chronicled KKR’s high-profile acquisition of RJR Nabisco in a leveraged buyout and the US company’s subsequent failure, swears by his partnership with the PE firm. “From KKR, we learnt investment rigour, how to improve the role of the board, track progress like a hawk and understand risk and mitigate it upfront,” says Puneet. “If you have the right partner, you can grow. People fear PE firms as they [the people] don’t like accountability.”

DBL chose its acquisitions carefully even as it sat on cash. Though it bid for Jaypee Group’s cement assets, it did not pursue the deal aggressively. The acquisition would have added a capacity of 17.2 million tonnes in north and central India where DBL had no presence. “We were not ready. Our balance sheet would have been over-leveraged,” says Doshi. (Eventually, UltraTech Cement acquired the capacity for Rs 16,189 crore in 2016.)

The execution capabilities added to the company’s efficiency. “We created greenfield and brownfield capacity with excellence in execution,” says Gautam Dalmia, Puneet’s cousin who is also the managing director of DBL. “This helped us build capacity at the lowest cost and in the shortest time.” Gautam, who runs the group’s sugar business, handles strategy for DBL along with Puneet and monitors capacity-building within the company.

DBL also located its expansion sites after considering proximity to high realisation markets (for cement) and access to raw material (limestone). Cement prices in Tamil Nadu and Kerala, along with most of east India, are higher than in other markets. It also looked for scale wherever it operated. As a result, it is present in just two regions–the south and the east. It is among the top four players in the highly fragmented southern market (8 percent market share) and third in the east (15 percent market share). In the northeast, considered part of the eastern region, its market share is 21 percent and it is the second biggest player.

The company has gained better pricing power from scale. Also, from the premiumisation strategy it has
adopted for its brands. Its specialty cements are priced higher as are some of the brands it has started such as Dalmia DSP Cement—a higher quality cement in a water- and tamper-proof packaging which enhances the shelf life of the product. “This product is priced 8 percent higher and accounts for 8 percent of our total overall trade sales while it is 15 percent in the east,” says Puneet.

The other facet of DBL is its focus on cost. “Through better fuel management, larger share of blended cement and higher productivity, we have cut our variable cost significantly,” says Mahendra Singhi, group CEO, cement, and wholetime director, who had previously headed Shree Cement as its CEO for 19 years. He ensured that DBL embraced petcoke as a fuel. “Fear of failure is the biggest impediment to operational excellence. We removed that,” he adds. “DBL’s variable cost at Rs 1,247 per tonne is way lower than the industry average of Rs 1,415 [for FY17—9 months].”

“Given its relentless focus on cost and extracting a premium via the trusted Dalmia brand, the company was able to deliver solid earnings and cash flow over the years,” says KKR’s Nayar who sat on the board during the period of the firm’s investment. DBL enjoys an Ebidta of Rs 1,264 per tonne compared to the industry average of Rs 962. “We may not be the lowest cost producer in the country yet but we are on our way to achieving that,” says Gautam.

Puneet, for his part, is now focusing on larger issues.

“I want to create a culture where people can think and work like owners, empower them and celebrate success as well as failures,” he says. He is also keeping a close watch on Digital Dalmia.

“Every business will be disrupted digitally. I am looking at the way DBL can be disrupted,” he says. “It is important to be ready when that actually happens.”

Tweets by @forbes_india
Father (and son) knows best
A designer by chance, Aneeth Arora of péro has made simplicity her byword