Modern portfolio theory is the foundation of global money management, but a pair of mathematicians in Boston has revamped it—with market-beating success 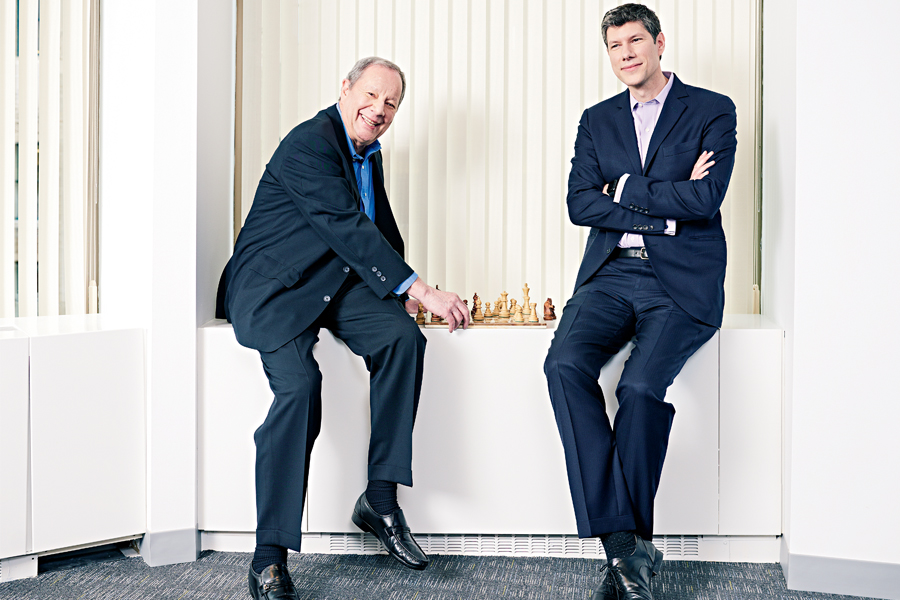 Among academicians, few have made a ­real-world impact as far-reaching as Harry Markowitz, the father of modern portfolio theory. Markowitz devised his seminal theory as a 23-year-old PhD student at the University of Chicago in 1950 and won a Nobel Prize for it in 1990. For generations, it has guided money managers in picking stocks that have the highest possible returns given a set of risk assumptions. In fact, Markowitz’s mean-variance optimisation, also known as the “efficient frontier”, is embedded in most software that financial advisors use to create portfolios today.

But there’s a big problem lurking at its core: The mathematical tools Markowitz used are actually too precise, so in the real world of stocks and bonds—where information is much blurrier—it occasionally produces wild outcomes.

Enter New Frontier Advisors, a PhD-heavy Boston-based asset manager that has been using low-cost exchange-traded funds to one-up Markowitz. For more than a decade, its clients have beaten equity- and bond-market benchmarks by 100 to 200 basis points after fees, and assets have swelled to almost $3 billion.

“Markowitz’s theory makes all kinds of sense, consistent with informed investor behaviour,” says New Frontier founder Richard Michaud, 75, a Boston University-educated mathematician. “But when you try to use it, you can’t.” Michaud cites the bizarre portfolios that sometimes result from a pure Mar­ko­witz equation. The Nobel laureate’s efficient-frontier math, for example, might produce a portfolio with a 25 percent position in Brazilian stocks and 30 percent in microcaps, since the assets are uncorrelated. But most advisors would consider such heavy allocations crazy. To fix this problem, analysts place limits on the percentage of any security type in the portfolio. And that defeats the purpose of using Markowitz’s elegant theory in the first place.

“Almost all investment-management software has a dirty little secret underneath: It’s not actually letting the theory dictate the portfolio,” says Richard’s son Robert, 44, who started coding for his father at the age of 12 and dropped out of a doctoral programme in finance at UCLA’s Anderson School to join New Frontier in 2001. “It’s forcing the user of the software to tell the software what portfolio they wanted to get anyway.”

Instead of simply plugging reliably unreliable estimates into the computer, the Michauds layer on thousands of Monte Carlo simulations—a mathematical technique that uses randomness to create a cloud of possible outcomes for individual stocks and collections of securities. Then they use more advanced math to find the portfolios expected to perform best across alternative future outcomes. This forms the basis for a new set of optimal risk-adjusted portfolios.

Not everybody agrees with the Michauds’ methods. “What they’re doing is in theory wrong,” says John Liechty, a professor at Penn State. But even Markowitz concedes New Frontier’s potential. “I conjectured that I could produce a mechanical methodology that would beat Michaud at his own game. But he won,” says Markowitz, 89, who considers Michaud a friend despite their long-running disagreements.

Michaud started probing the flaws in Markowitz’s theory as an analyst at asset manager Boston Co in the 1970s. The son of a Boston-police-officer father and a factory-worker mother, he graduated from Northeastern University and earned a doctorate in mathematics at Boston University.

Boston Co was a pioneer in computer-guided investment decisions, but Michaud quickly realised the machines running Markowitz’s formula weren’t coming up with portfolios anybody could use. One portfolio literally allocated a third of the money to Austrian stocks—at a time when Boston Co could have bought the entire Austrian stock market itself.

“The models didn’t give solutions that made sense to anybody who had a ghost of a brain,” says Michaud.

In 1989, Michaud wrote an influential article laying out the problems with the Markowitz optimisation and spent the next decade working on a solution. In the 1990s, he was working at Acadian Asset Management while his son did programming for the firm part-time as an undergraduate at MIT. The two are highly competitive—Robert says he enjoyed playing chess with his dad until he could beat him consistently—but they collaborate on the firm’s models. The pair has four patents, with two more pending.

The Michauds had built a prosperous business selling their software to investment companies until California financial advisory firm AssetMark offered the father-son team an easy path into the world of money management, giving them access to thousands of financial advisors and handling trading and other back-office functions. New Frontier charges 10 to 35 basis points, or hundredths of a percentage point, while AssetMark charges up to 70 basis points.

Last year, AssetMark was acquired by China’s Huatai Securities, and the Michauds are eager to spread New Frontier’s quantitative approach to the masses of budding Chinese investors.

New Frontier’s results aren’t spectacular, but their portfolios with 40/60 and 60/40 stock/bond mixes have outperformed benchmarks, net of fees, by more than a percentage point since 2004.

Currently, US Treasury bond ETFs are a big holding despite widespread fears of rate hikes.

“According to our customers, we’re overallocated to Treasurys,” Robert says. “That may cost us business. But according to us, we’re optimally allocated.”

Tweets by @forbes_india
The idea was to start something that was Indian: Kama Ayurveda co-founder
Cementing its position: Dalmia Bharat's solid (and sexy) plan