Square Off: Back to the chess board

The startup that lets you challenge anyone, anywhere to a game of chess on a physical board 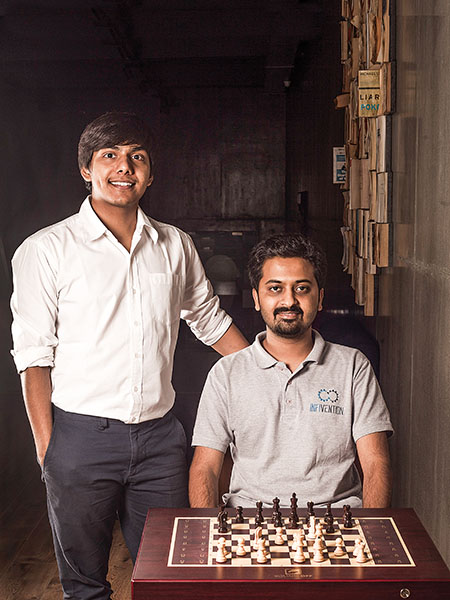 Aatur Mehta (left) and Bhavya Gohil capitalised on the commercial potential of their smart chess board
Image: Aditi Tailang
The idea came from a project to build a chessboard for the visually impaired. In 2013, Bhavya Gohil and Aatur Mehta, then second-year students of electronics engineering at KJ Somaiya College of Engineering in Mumbai, took up the challenge at their college’s incubator lab RiiDL.

The result of that project—a Braille chessboard with voice feedback and where the opponent’s pieces move on their own—took them to the innovations fair Maker Faire Rome in 2014 where the positive response made the duo realise the commercial potential of their board. The two decided to turn it into a smart chess board that lets the user challenge anyone in the world on a traditional board.
“We never had a conversation [on whether] we have to make this a commercial project, it was a given,” says Gohil, 24, sitting in a conference room at thinQbate in suburban Mumbai, where their company InfiVention Technologies is now incubated.

Four years and seven prototypes on, the chessboard now lets users battle the system’s artificial intelligence (AI) chess engine, which has 20 difficulty levels. The related app Square Off lets users challenge players located anywhere, whether they have the board or not. When your opponent makes a move on the app it plays out on your Square Off board with the selected piece moving on the board.

Square Off has also tied up with chess.com so that brings another 21 million players into the fray, says Gohil. “So any Square Off player will be able to play with any chess.com player and vice versa. This is expected probably by July-end, we have it in beta right now,” adds Mehta, also 24.

The startup, founded by Gohil (CEO) and Mehta (CTO) in September 2015 as Chess Automated soon after they passed out of college, was initially funded by Pranav Marwah, co-founder of thinQbate, and Samir Somaiya, chairman of the KJ Somaiya Trust, after which they took to crowdfunding through Kickstarter and Indiegogo.

“I’m an avid scrounger of interesting consumer products from across the globe via Kickstarter and Indiegogo, so the opportunity to see and invest in a product (and two extremely sharp innovators) with potential up-close was convincing,” says Marwah.

On Kickstarter, their goal was $50,000 and they reached that in six hours. “In 24 days, we raised $220,000,” say the founders who then started the process of manufacturing the board in China. The board has a rosewood finish and traditional wooden pieces and comes in two versions—the Kingdom set and the Grand Kingdom set, priced at $329 and $399 respectively. The latter has an auto reset feature where the pieces move back to their designated spaces at the end of a game.

A seed round of investment of $500,000 from investment firm India Quotient followed in July 2017. While the initial pre-orders were for around 1,800, they did a first run of 2,600 and started delivering the product in January this year. They started selling the surplus on their website (squareoffnow.com) launched in April. “The only downside of building a product like this is the [small] size of the market that it initially attracts or caters to. They’ve constantly shown, however, that even this is something that can be changed,” says Marwah.

The founders seem to have identified their markets. They have tied up with Amazon to sell in the holiday season in the US and a manufacturing run of double their first round is on the cards. “We don’t sell in India yet because it becomes expensive with custom duty and shipping, but maybe next year we can think of a proper launch in India when we have a bigger team in place,” they say.

Though the concept and technologies can be used to play other board games too, for now they are focusing on chess, constantly adding updates. But other tech products are on the cards. “Because now we know the entire cycle, how much time, money and effort it takes, we are starting the R&D,” says Gohil.

While they don’t want to discuss details, what’s certain is that they will be products where the virtual and real worlds meet.