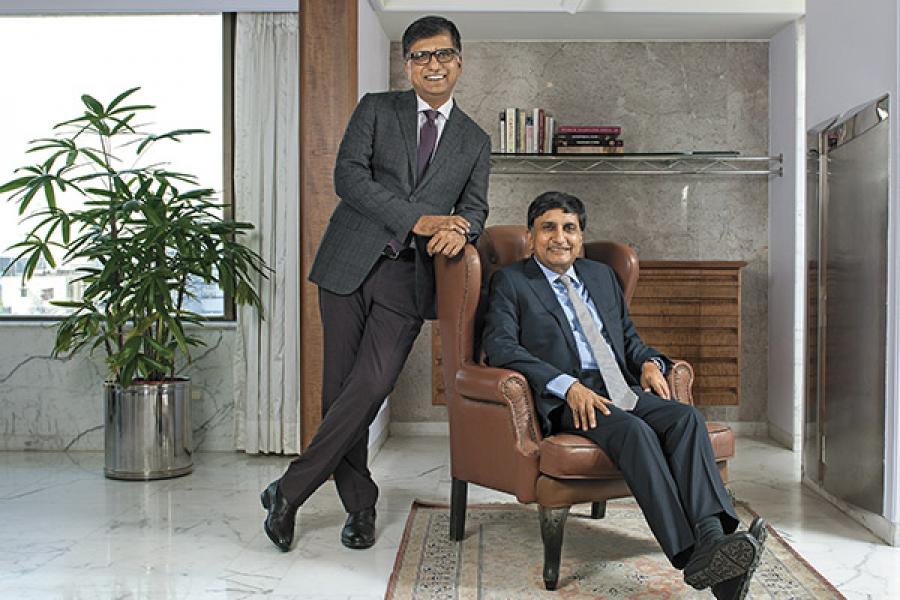 “The chemistry works” is a phrase that pops up often as Samir Mehta narrates the journey of his company, Torrent Pharmaceuticals Ltd. That makes sense then, since chemistry is at the core of the business.

But Mehta, 53, uses the phrase not just to refer to the formulations involved in manufacturing the drugs he sells. There is also “chemistry” in his relationship with elder brother Sudhir, 62, whom he succeeded as executive chairman in 2014, he says, sitting in his office at the company headquarters overlooking the Sabarmati river in Ahmedabad, Gujarat. (Sudhir, who was also responsible for the $2.17-billion Torrent Group’s foray into the power sector, is currently chairman emeritus of Torrent Pharma.)

For FY16, Torrent Pharma was well on its way to becoming a $1 billion (around Rs 6,600 crore) company by sales. In the first nine months of the fiscal, the drug-maker registered a consolidated turnover of Rs 5,177 crore and net profit of Rs 1,500 crore. (The company was yet to announce its fourth quarter results at the time this story was written.)

The numbers are all the more impressive given that over two-thirds of Torrent Pharma’s business was wiped out when the Soviet Union disintegrated in 1991. Its resurrection can be attributed to a measured approach to business expansion, resilience, a quick course correction led by the brothers and its focus on core values, including ethics and governance. And these principles existed right from the company’s inception.

Specialty drugs
Torrent Pharma was founded by Uttambhai Nathalal Mehta, a medical representative for Swiss pharmaceuticals giant Sandoz, with a seed capital of Rs 30,000, his life savings, in 1959. From his time in the field, Uttambhai learnt the innards of the pharma business and realised that it would be futile, with limited resources, to compete with bigger rivals in selling drugs to a wide array of general physicians.

He chose to focus solely on psychotropic drugs—a less competitive segment—that could be pitched to psychiatrists. One of Torrent Pharma’s earliest products, Trinicalm Plus, launched in 1970 and used in the treatment of ailments related to the central nervous system, turned out to be a blockbuster.

Even today, Torrent Pharma focuses largely on specialty drugs, including branded generics targeted at chronic ailments in segments such as psychiatry, dermatology and oncology.

Going global
By the 1980s, Sudhir and Samir Mehta (who were ranked 25th on the 2015 Forbes India Rich List with an estimated wealth of $3.3 billion) were playing an active role in the business and Torrent Pharma had begun to harbour ambitions of going global. The Soviet Union was a natural choice as it was India’s biggest trading partner at the time. The region offered Torrent Pharma the benefit of access to a large international market with a centralised procurement machinery headquartered in Moscow.

The expansion into the Soviet Union was an extension of Uttambhai’s philosophy of carefully choosing avenues of growth that would yield quick returns with limited resources. The centralised procurement system also meant that Torrent Pharma did not need a large field force in that region. The strategy was successful and the USSR was Torrent Pharma’s biggest market until the country broke apart in 1991. 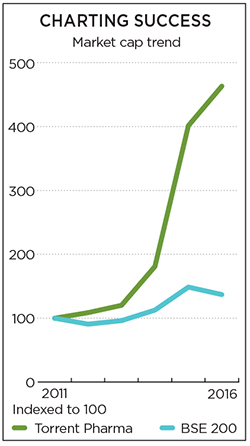 Recovery of dues (and fortunes)
Following the collapse of the Soviet Union, the centralised procurement system was disbanded and 70 percent of Torrent Pharma’s market vanished overnight. A large chunk of the company’s receivables were still outstanding and there was no surety that the drug-maker would recover its dues.

It would have been natural for any promoter to lose heart under such circumstances. “But we decided to rebuild the business brick-by-brick,” recalls Mehta.

The first few years were spent in trying to recover dues. “We had to go from department to department [in Moscow] to find someone who would acknowledge that there was money owed to us,” Mehta says. “We were successful in recouping most of the money. That helped ease the situation somewhat. It could have been worse.”

Fresh expansion
The promoters decided to start their global business afresh. They were aware that it would take many years before they could start commercial supplies for new markets.

To offset the effect of these delays, the brothers focussed on growing the domestic business with new products. Though the cash garnered by the Indian business was only a fraction of what Torrent Pharma was earning from the Soviet Union, it was just enough, along with the money recouped, to plan another round of global expansion. The brothers chose Brazil because of its similarity to the Indian pharma market.

“It was a paradigm shift for us. Earlier we were looking at opportunities that could be monetised quickly with limited resources. Now we were deploying capital that would yield returns only after a period of gestation,” says Mehta.

The advance into Latin America materialised only in 2002. And this was followed by a quick succession of international acquisitions and expansions. In 2005, Torrent Pharma acquired Pfizer’s German business Heumann Pharma, gaining inroads into the European market. In 2007-08, the company also began to market its drugs in the US.

Almost three quarters of Torrent Pharma’s revenues in the first nine months of FY16 came from overseas. The company is also the largest Indian generic drug manufacturer in countries like Brazil, Germany and Philippines.

Inorganic growth
Torrent Pharma made its next big buy from the domestic market when it snapped up Mumbai-based Elder Pharmaceuticals for Rs 2,004 crore in 2013. With that, its product portfolio widened to include over-the-counter drugs. The company followed this up with the acquisition of Zyg Pharma in 2015, gaining access to a portfolio of dermatological formulations for the US market.

Aligning cultures is what Torrent Pharma stresses on after acquiring another company. Speaking of Torrent’s Heumann acquisition, Mehta says, “The idea of an Indian company acquiring a European company was unfamiliar [when Heumann was bought] and the German workforce didn’t know what to expect. But we communicated with them and even ensured that the new CEO was German.”

With the Elder deal, Torrent Pharma acquired a highly unionised workforce, a first for the company. “We focussed on building a trust bridge [with Elder’s employees]. We explained the rationale behind each of our productivity-linked HR policies and gave them the choice to either continue with the existing policies or switch,” explains Mehta. Within a year, all Elder employees opted for Torrent Pharma’s HR policies.

Forward-looking calls
“Decisions that we take for the business need to add long-term value and not just short-term profitability,” explains Mehta. “This has been at the root of allowing us to develop a business that has been sustainable over the years.”

Senior executives have the freedom to take decisions that are in the best interest of the company. This is one of the reasons why Chaitanya Dutt, Torrent Pharma’s director for research and development, has stayed with the company since 1987. “If there is a quality issue with a particular batch and I decide that it has to be thrown down the drain, it is thrown down the drain,” he says.

At a time when Torrent Pharma’s business was ailing from the Soviet crisis, the Torrent group’s power business—established in 1996—was going strong. There was speculation that the promoters may utilise funds from the latter to support the former. “But nothing like that happened,” Dutt says. “Pharma was pharma, and power was power.”

“The law has to be followed in letter and spirit at Torrent Pharma,” Mehta says. He adds that prudent decision-making prevented the company from a major recall when, earlier this year, the Indian government banned 344 fixed-dose combination drugs. Torrent Pharma pre-empted the fact that these drugs may not stand regulatory scrutiny and did not launch them in the market. “We didn’t succumb to the temptation of utilising the short time-window in which these drugs could have been sold in the market to make a quick buck before the regulator banned them,” Mehta says. “So it is more by design than default that we are least affected among pharma companies by this ban.”

Professionalism
A true hallmark of a well-run company is that its directors and senior executives are kept in the loop on all matters of concern to them, and this is something that Torrent Pharma’s promoters do very well, says Haigreve Khaitan, senior partner at law firm Khaitan and Co, and a director on the board of Torrent Pharma.

“The professionalism with which the board of Torrent Pharma functions is remarkable,” says Khaitan. “No matter how big or small a decision is, it is communicated to all, most often by Sudhir and Samir themselves. They are open to suggestions and while they take their own decisions, they do so after taking everyone’s views into account.”

It is this professional approach that has helped Torrent Pharma build a sizeable business in the US despite being a late entrant and having a limited product portfolio.

In recent times, Torrent Pharma has one of the best track records in terms of securing timely approvals for its key products. Mehta believes his company’s strategy to take its time in preparing dossiers to be submitted to the regulator and seeking approval for new products has resulted in quick nods. “We’d rather take two years to prepare a filing, but make sure it’s foolproof,” he says.

Mehta doesn’t believe in setting five-year targets. The constant endeavour, he says, is to build a world-class institution that delivers “best-in-class profitability”.

Torrent Pharma’s operating profit margin of around 27 percent is several notches higher than the industry average of 19 percent. As long as this trend continues, the chemistry will continue to work for the company’s stakeholders.